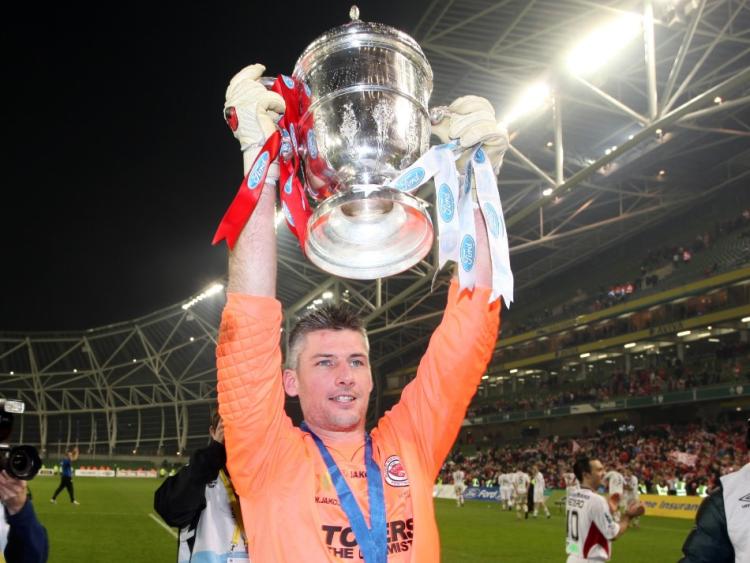 Sligo Rovers goalkeeper Ciaran Kelly who was the penalty shoot-out hero in 2010 and 2011 pictured raising the FAI Cup in the Aviva Stadium.

It has been confirmed this afternoon that Sligo Rovers' Extra.ie FAI Cup semi-final clash with Dundalk will be played on Sunday, September 29 with a 5pm kick-off in The Showgrounds.

Confirmed: The FAI Cup semi-final with Dundalk will take place on Sunday 29th September at 5pm in The Showgrounds #bitored pic.twitter.com/hzjbzIQAGp

In the second semi-final, Sligo Rovers will welcome Dundalk to The Showgrounds on September 29, with kick-off at 5pm and this fixture will also be live on RTE2. If a replay is required, it will take place on Tuesday, October 8, with kick-off at 7.45pm.

Sligo Rovers have been in excellent goalscoring form in the FAI Cup this season. They saw off the challenge of Glebe North on a 8-0 scoreline.

They then faced Limerick in a bizarre encounter that saw the Bit O'Red fall two goals behind before winning 6-2 in a match that also saw four red cards.

It was a crazy night in Sligo as @sligorovers came from two goals down to beat @limerickfcie 6-2. Limerick claimed three of four red cards on the night.

Soccer Republic is on 7:25pm on @rte2 Monday while the quarter-final FAI Cup draw is on @rteradio1 at 8:35am #SoccRepublic pic.twitter.com/H82w9Oejwz

A place in the last four was confirmed when Sligo Rovers saw off the challenge of UCD last weekend in The Showgrounds.