Drumshanbo VS rebound into All-Ireland Cadette A Final 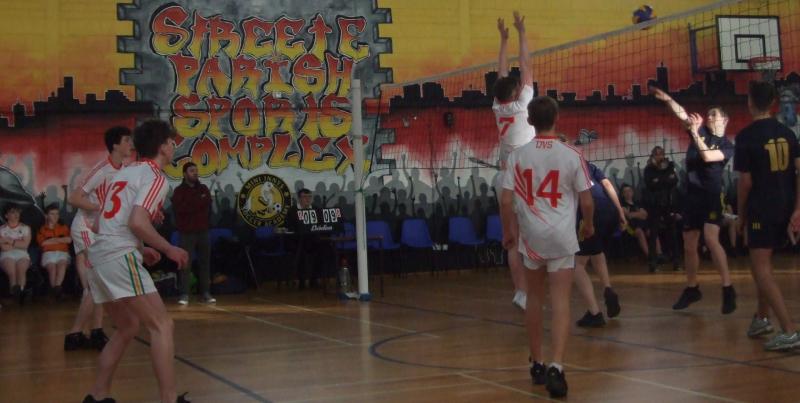 Drumshanbo Vocational School recovered just in time on Monday last against a very impressive Dublin side to reach the National Cadette A final.

Drumshanbo got more than they bargained for, as Sutton Park came from behind and were very unlucky not to have won the first set.

However, Drumshanbo settled themselves and qualified for their fifth successive cadette A final and their 19 th in all.

It was Drumshanbo’s 26 th semi-final in 30 years and Sutton’s first but for long periods of the first set it was Sutton who starred. There was an outstanding start when, after Sutton won the first point, it took a rally of over 50 touches for Drumshanbo to win their first point!

Thanks to aces from Arcadiusz Oberwan Drumshanbo led with good sets from Ciarán McMurrough who chased down all match.

At 6-9 down Sutton got their defence in order and raced 16-9 ahead. Danny McWeeney came on, and immediately won a net encounter, served an ace which levelled it 15-15.

This time it was Conor Flood to the rescue as he volleyed a winner and served three to leave the score 24-23 and set point.

Finally Ronan Moran restored order with a perfect placement and a spike winner.

Arcadiusz Oberwan bookended the second set. His three searing serves left it 6-2 at the start. Sutton got more aggressive but their error count rose.

Ronan Moran, the defensive star, served it to 15-7. Eoin Guckian, after a brilliant save served to 18-8. Karl winters came on at 20-9 and Arcadiusz Oberwan was rampant,with six serves to bring it to 24-9.
Sean Moran sealed off a corner and Drumshanbo were back to their best with their defence unyielding.