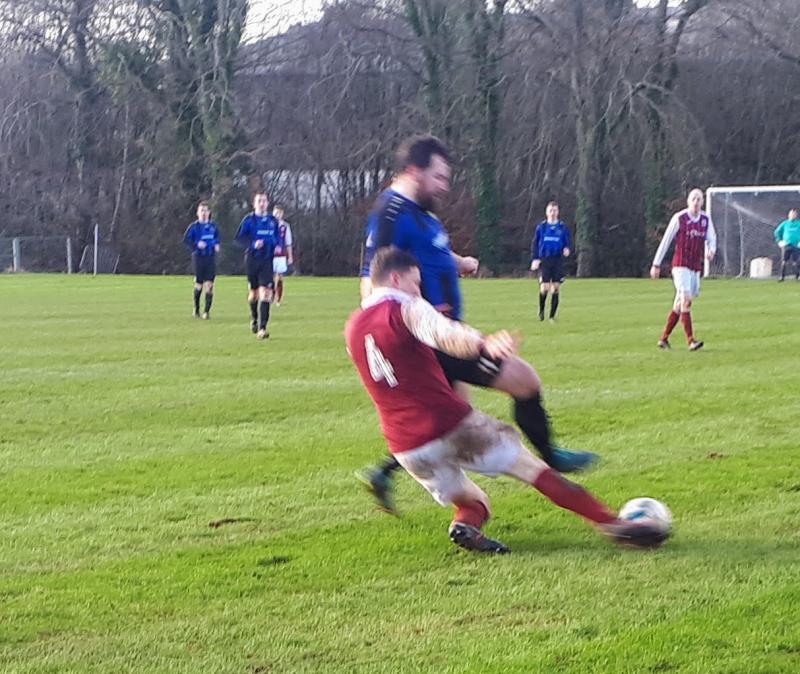 A frozen pitch, a last-gasp equaliser and a dramatic penalty shoot-out only begin to tell the tale of last Sunday's meetinof Manorhamilton Rangers and Renmore AFC in the TP Brennan Connacht Cup in the Bee Park last Sunday.

Manor Rangers have been involved in more than their share of dramatic cup encounters over the years and last Sunday's win over the fancied Galway city side will rank among the best of their cup heroics.

Following on from their league victory over Carbury a week earlier in Sligo, there was a feeling of optimism in the Bee Park that not even the arctic conditions could diminish. 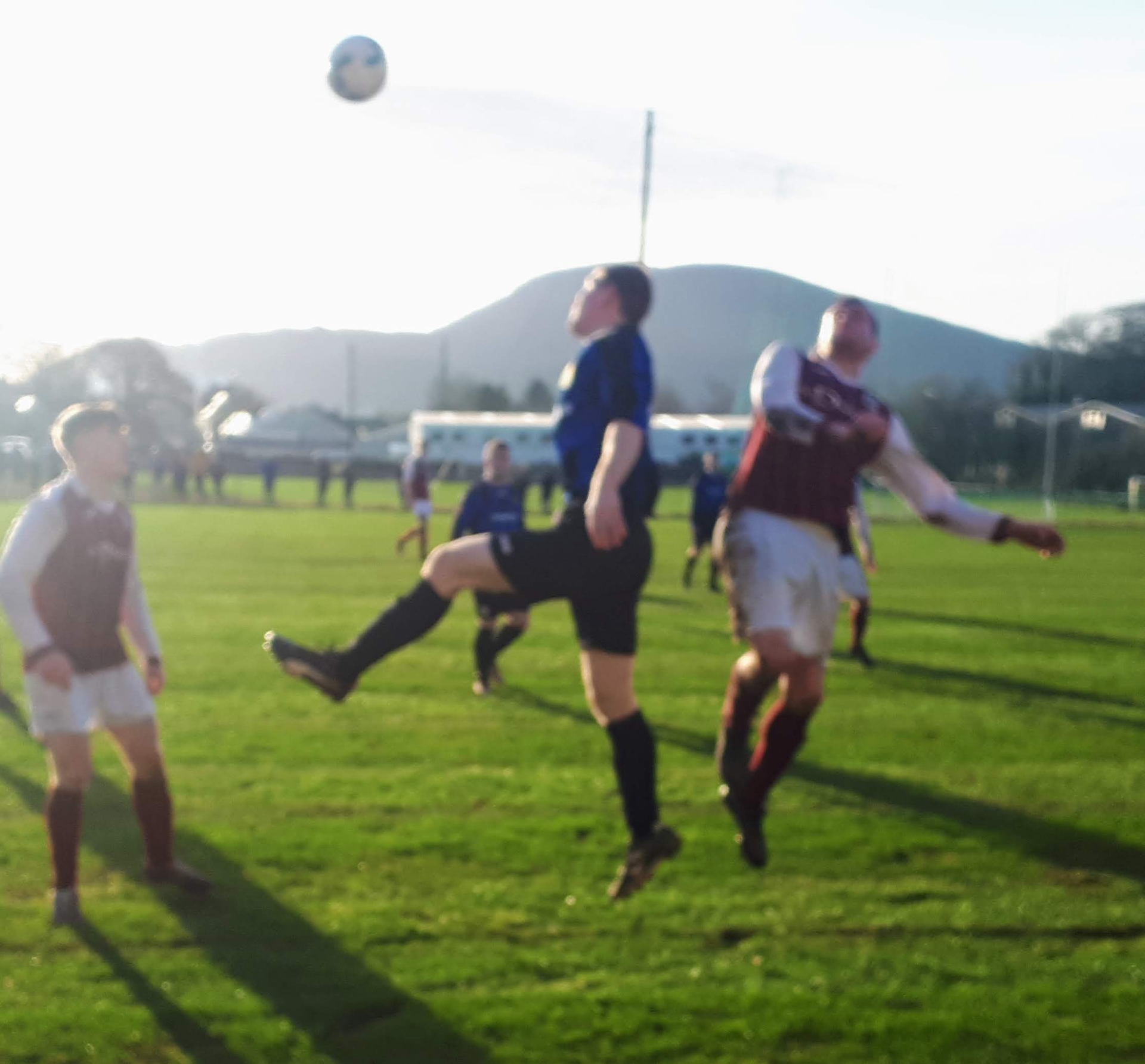 Referee Owen McLoughlin delayed kick-off by 15 minutes to give the Bee Park every opportunity to defrost thoroughly and as a result of the excellent work carried out by the groundstaff in Manorhamilton, the pitch was more than up to the task when the game got under way.

It was however a sluggish start from the home side who were thankful to goalkeeper Colin Gilligan in the early stages when he showed good reaction to keep out a long range shot. However, the rebound fell kindly for Eoin O'Boyle but the Galway man saw his shot go harmlessly over Gilligan's goal.

The first glimpse of Manor Rangers as an attacking threat arrived in the eight minute when Seamus Ryder tried his luck from the edge of the box but his daisycutter trickled past the Renmore post and wide.

Just two minutes later a mix-up in the Manor Rangers defence resulted in Renmore taking the lead. A dangerous cross from the right should have been dealt with by the Manor rearguard but when two defenders competed for the same ball the end result was the ball ran through to the waiting Flo Gerrard Jouffe who slotted his shot low past Gilligan. 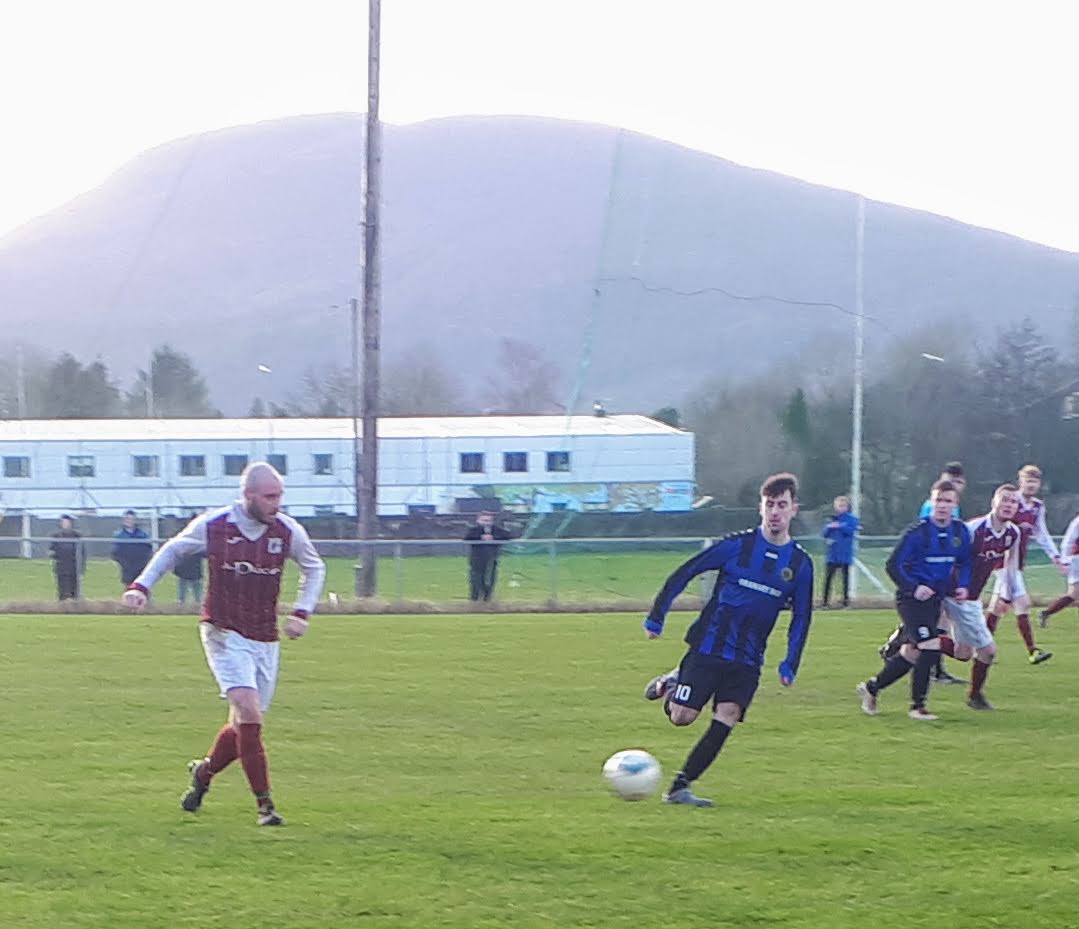 Moments later there was to be a further blow for Manor when Paul Clancy signalled to the bench that he was unable to continue, resulting in the introduction of Brian McDonald and a slight adjustment in terms of tactics.

Those adjustments didn't immediately help Manor as Renmore continued to boss matters and they came close to doubling their advantage when Paul Sinott saw his near post header from a corner go just over the Manor crossbar.

At the other end Manor were looking for some inspiration to kick start their challenge. Aaron Hickey lined up a free kick, barely 10 yards inside the Renmore half but his effort was well off target with the ball last seen flying in the direction of Glencar!

That wild effort was soon forgotten when Renmore's goalkeeper Keith Loughnane was called into action for the first time of note. Renmore were guilty of over playing the ball out of defence and when they lost possession Seamus Ryder was presented with a great opportunity but he was denied by a fine save from Loughnane.

While Renmore started the brighter, it was Manor who dominated the final 25 minutes of the half but time after time were to be left frustrated.

Brian McDonald raced onto a long ball and beat the advancing goalkeeper but from a tight angle was unable to force his shot home.

Robbie Cunningham then saw a shot well saved by Loughnane.

Manor could have been forgiven if frustration had gotten the better of them as excellent opportunities came and went with nothing to show for their efforts.

A precision pass from Alan Hickey released Cunningham whose delicate finish over the goalkeeper looked destined for the net but he was denied by a goal line clearance and with five minutes of the half remaining the same player was denied once more.

After evading the attention of two defenders, Cunningham shot for goal but left-back Shane Trill was on hand to make an excellent last ditch clearance. 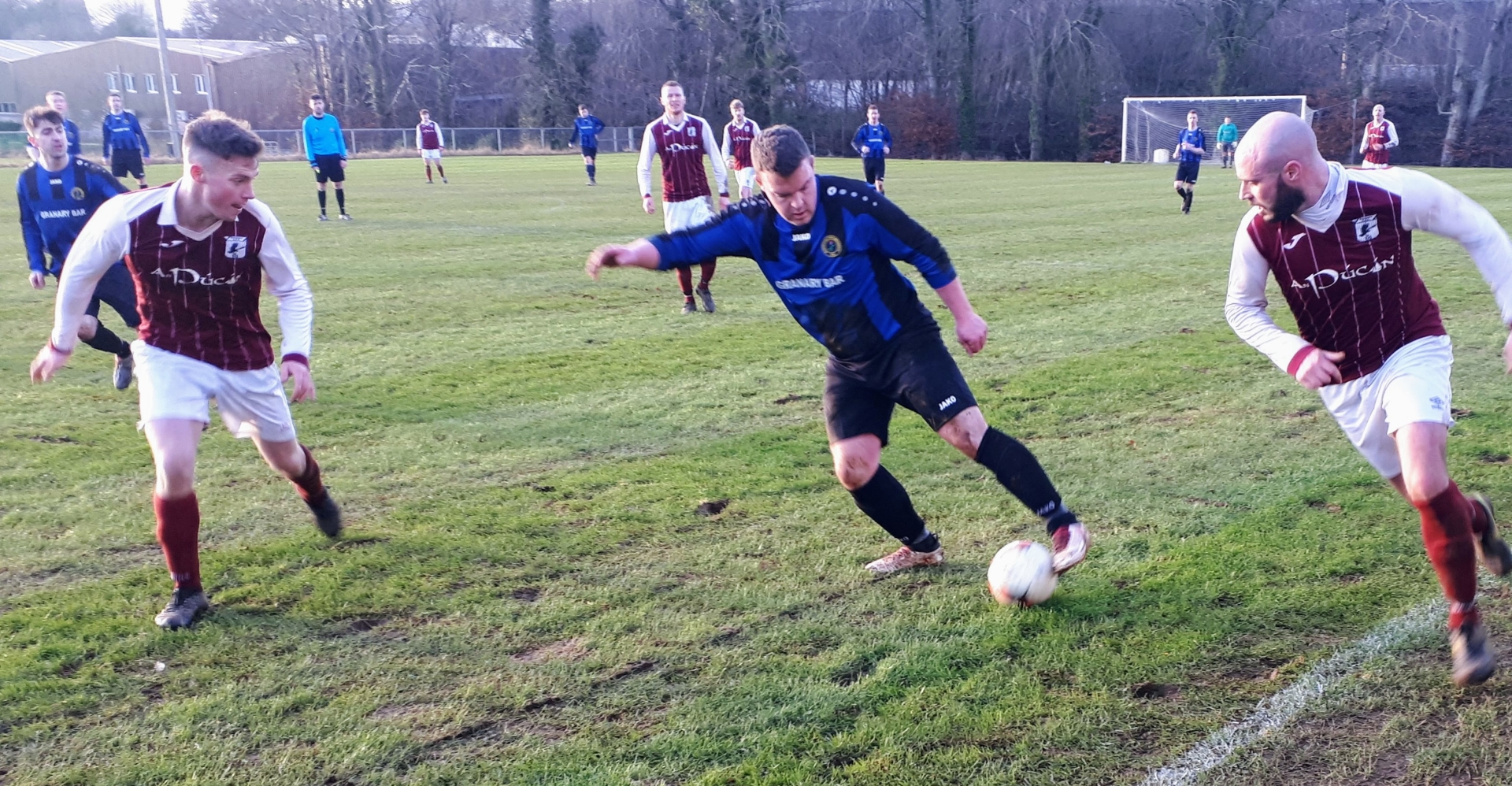 The early stages of the second half saw Manor continue their dominance. Brian McDonald was very unlucky when his effort went just wide.

As the half progressed clear cut chances became harder to create. Renmore were well organised and resolute while Manor continued to look for the elusive equaliser while also ensuring they remained solid in defence.

Kieran Brick, who was one of Manor's standout performers saw a well struck shot blocked in the box but appeals for a handball were waved away.

Robbie Cunningham then saw an effort flash wide of the Rennmore goal after a fine cross from Brick while Seamus Ryder saw his effort from a tight angle crash into the sidenetting.

Most in the Bee Park had come to terms with the fact that it wouldn't be Manor Rangers' day but that attitude certainly didn't transfer onto the pitch where the Manor playes continued to give their all.

Their perseverance and fine play got the reward it deserved with barely a minute left on the clock.

obbie Cunningham's flick from a Brian McDonald long-throw fell kindly for Ryder and the powerful forward got a delicate head to the ball to send it over the goalkeeper and into the net to spark incredible scenes in the Bee Park.

It may not have been quite as dramatic as Gary Hickey's late, late winner against Douglas Hall but it was celebrated just as vigorously.

Extra-time provided even further tension and drama with Manor incredibly taking the lead two minutes before the extra-time interval. Brilliant wing play from Robbie Cunningham set-up Ryder and the big man showed he is as effective with his feet as he is with his head when he applied a fine, low finish to dispatch the ball past Loughnane.

However, that was not to be the end of the drama as Renmore had no intention of bowing out without an almighty battle and early in the second period of extra-time the sides were level once more.

A dangerous, teasing delivery from Shane McHugh appeared initially as though it would favour Manor Rangers' Colin Gilligan but Paul Sinott refused to give up the chase and with an oustretched boot he disaplyed incredible control. Gilligan was now left completely isolated near the edge of the box and the quality of Sinott's touch meant he had the ball completely under his control and was able to dispatch the ball into an empty net.

Both sides continued to give their all but as the game neared the conclusion of extra-time it was apparrent the efforts of the contest were beginning to take its toll on players from both sides.

Ultimately a penalty shoot-out was needed to determine a winner and after 18 spot kicks it was Manorhamilton Rangers who claimed their place in the next round, but only just.

Penalty Shoot-out
Manor: Alan Hickey opens the scoring (1-0).
Renmore: Cian Gallagher sends Colin Gilligan the wrong way (1-1).
Manor: Paul Logan's shot has too much power for Loughnane (2-1).
Renmore: Daniel Corbett finds the bottom left corner (2-2).
Manor: Robbie Cunningham drills his shot low and hard to the right (3-2).
Renmore: Paul Sinott slots his effort down the middle (3-3).
Manor: Paddy Woulfe with a perfectly placed effort (4-3).
Renmore: Keith Fitzgerald dispatches his effort low and hard (4-4).
Manor: Seamus Ryder, operating on one foot, slots his penalty to the left corner (5-4).
Renmore: Colin Gilligan got a hand to Rory Glynn's effort but it wasn't enough (5-5)
Manor: Anthony McDonald's effort was saved by Loughnane but he was adjudged to be off his line and McDonald made no mistake at the second time of asking (6-5).
Renmore: Cathal Walsh dispatches his effort to the right corner (6-6).
Manor: Brian McDonald finds the right corner of the Renmore goal (7-6).
Renmore: Team captain Paddy Gannon with a fine effort, leaving Gilligan flat footed (7-7)
Manor: Renmore goalkeeper Keith Loughnane reacts quickly and saves Diarmuid Giblin's effort (7-7).
Renmore: Shane McHugh had the chance to win the game for Renmore but his effort crashed off the post (7-7).
Manor: Thomas McDonald saw Loughnane move early and slotted his spot kick away with no sign of nerves (8-7).
Renmore: Colin Gilligan got down low to deny Dion Walshe and secure victory for Manor.

GAME AT A GLANCE : TALKING POINTS

HIGHLIGHT
In terms of excitement it is hard to beat Seamus Ryder's 89th minute equaliser but in terms of quality, Renmore's second goal, scored by Paul Sinott is hard beaten. Sinott's deft first touch took the ball away from Colin Gilligan and Sinott then applied a composed finish.

LOWLIGHT
Hard to think of any although the dreaded penalty shootout is a horrible way to be eliminated from a competition.

TURNING POINT
Undoubtedly Seamus Ryder's first goal was the game's turning point. Manor Rangers had been aplying plenty of pressure and had seen a number of chances come and go. Just when it seemed as though they would be beaten by the clock Ryder popped up, as he so often does, with a crucial goal to force the game to extra-time.

MAIN MAN
Two goal hero Seamus Ryder put in a tireless shift for Manor Rangers while goalkeeper Colin Gilligan was instrumental throughout and came up with a decisive save in the penalty shootout. However, there were standout performances all over the pitch. Player-manager Thomas McDonald was a rock at the back alongside Ciran McLoughlin while captain Alan Hickey was as influential as ever. Paul Logan was another who stood out while Paddy Woulfe and Robbie Cunningham were perhaps not as creative as is normally the case but both worked tirelessly and were hugely instrumental in their side's victory. Not an easy call but arguably the pick of the bunch from a Manor Rangers point of view was Kieran Brick who ran himself into the ground, covering every blade of grass for the Manor cause.

REF WATCH
Owen McLoughlin was on top of everything over the course of the 110 minutes. His major bugbear proved to be foul language and dissent with a number of players issued yellow cards for swearing or questioning the decisions of the referee.

WHAT'S NEXT
For Manor Rangers, attention will next weekend return to the Super League where they will be hoping to put more pressure on the top two - Carton United and Carbury - when they face Glenview next Sunday morning in the Bee Park. Before that, all associated with the club will be eagerly following the fortunes of the St Clare's who face Balla in Wednesday's FAI Schools Junior ‘B’ Boys Connacht Cup Final.

Manor Rangers will now face Athenry in the fourth round of the TP Brennan Cup in the Bee Park on Sunday, February 9.