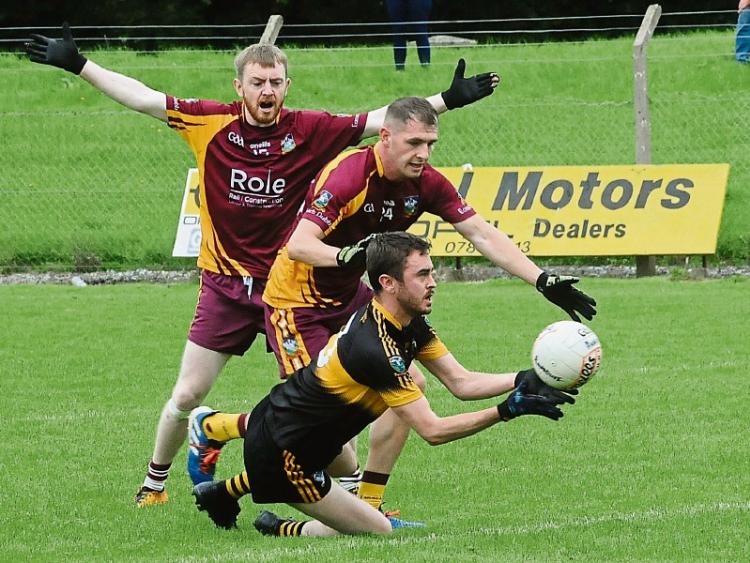 Annaduff booked passage to the Intermediate Championship semi-finals for the third year in a row when they had just about enough to see off a wasteful Bornacoola in a highly entertaining County championship quarter final played in Cloone on Sunday afternoon last.

The experience of the last two championship campaigns was clearly on show in the Annaduff performance, as they recovered from two first half Bornacoola goals and held their nerve in the closing stages as Bornacoola battled valiantly to stay in the championship.

Annaduff will reflect on a devastating middle period of the game, which saw them score ten unanswered points, as the basis for this victory as well as a vintage performance from Ray Cox who really stepped up to the mark when most needed and was easily the most impressive forward on display.

For the Bors – who dominated in the first half – they will rue as many as five frees that should have been converted during that run of ten unanswered Annaduff scores and will know that they passed up on a terrific opportunity to advance to a county semi-final. While it has been a year of significant progress for the Bors, this defeat will be painful, particularly given the excellent start they made to this game.

Annaduff goalkeeper Daragh Burke recorded the first score of the game with a confidently struck free from distance, but there was little he could do when Ronan Mulligan finished clinically to the net to give the Bors an early lead after four minutes.

Damian Moran with a neat point from play, and a Shane Mallon free ensured the Bors led by four after just ten minutes. Annaduff were struggling in the middle third at this point and it was the evergreen Ray Cox who fought hardest to keep the ship afloat.

He pointed either side of another Shane Mallon score to reduce the gap to three, before Mallon was hauled down in the Annaduff area in the 24th minute and referee McBrien had no option but to award a penalty to the Bors. Ronan Mulligan stepped up and dispatched it clinically to the net to put Bornacoola 2-3 to 0-3 in front.

Annaduff responded almost immediately with a good Kenny Cox point but Mallon restored the six-point advantage for the Bors in the 27th minute as the Bornacoola forward line continued to find space in the Annaduff rearguard.

Annaduff manager Karl Foley then brought on Mark Beirne and Jack Hughes in a double substitution that led to a defensive re-organisation that ultimately helped to blunt the effectiveness of the Bornacoola attack.

Alan Glancy reduced the gap to five points in the 28th minute and when Shane Mallon missed a relatively straightforward free in injury time to re-establish the six point gap, Annaduff went straight up the other end and pointed through Conor Reynolds.

From the resultant kick out, they earned a free that was converted by Sean McNabola and as the referee sounded his half time whistle, there were just three points between the sides and Annaduff were back in the game, despite a poor opening half hour by their standards.

However, having scored the last three points of the first half, they picked up where they left off at the start of the second half – Ray Cox proving almost un-markable – and Annaduff recorded the first seven scores of the second period as Conor Reynolds, Jack Hughes and Dillon Keane in particular began to exert themselves in the middle third and ensured excellent ball was finding its way to Alan Glancy and Cox in the inside line.

Cox points in the 31st and 35th minutes were added to by scores from Alan Glancy and a Sean McNabola free in the 40th minute which put Annaduff a point in front for the first time since the opening exchanges.

The chances Bornacoola created in this period were mainly from frees and they badly needed to convert one to break the Annaduff dominance but just seemed unable to do so.

Damian Moran came closest with a chance to level that bounced off the upright down onto the crossbar and back into play before Annaduff went straight up the field to extend the lead to two points through Alan Glancy.

Two more Ray Cox points put the lead out to four points with just 15 minutes remaining and it seemed Annaduff were comfortably on their way to victory. But Bornacoola rallied and finally registered a score – their first in almost 20 minutes - through the boot of goalkeeper Danny Farrell with a free from distance, and it immediately brought them back to life.

In the 20th minute, Damian Moran scored a good point from play to reduce the gap to just two points again, and with 9 minutes left on the clock, the same player reduced it to the minimum when he converted a free.

The excitement was now at fever pitch – Bornacoola had re-established a foothold in the middle of the park and with defender Kevin Mulligan moving on to Ray Cox, Annaduff’s main scoring threat was suddenly blunted.

It seemed momentum was with the Bors. Damian Moran missed a good chance from a free to level the game and shortly afterwards,with just two minutes left on the clock, they won another placed ball on the stand side about 48 metres from goal.

Up stepped goalkeeper Danny Farrell who connected well and his strike appeared to be heading over the bar before Conor Reynolds made a terrific catch over the crossbar to maintain the Annaduff lead.

His clearance launched an Annaduff attack and when Dermot Reynolds was fouled it fell to Annaduff keeper Daragh Burke to settle the Annaduff nerves and secure a two point lead with another confidently struck kick.

It was to be the last score of the game as the Bors were unable to create the goal chance that might have delivered a victory; it was also the crucial sequence of play in a very close game and underlined the tight margins between winning and losing – Farrell’s effort coming ever so close to levelling the game, and 20 seconds later, Dermot Reynolds winning the free that allowed Burke to seal a two point victory.

Annaduff may feel they got away with one here, but ultimately they just about deserved the victory. The second half performances of Dean Gill, Kenny Cox, Dermot and Conor Reynolds were key to the final outcome while the accuracy of Ray Cox and the industry of Alan Glancy up front ensured the scoreboard kept ticking over.

For the Bors, Anthony Mulligan dragged them back into the game with a series of outstanding catches from kick-outs in the second half while Kevin and David Mulligan, Allan Croghan, Damian Moran and Ronan Mulligan also enjoyed decent performances.

They will reflect positively on a season of progress and may be a team to watch in 2021 but it is their neighbours Annaduff who progress to a semi-final meeting with Carrigallen knowing they will need to improve on aspects of this showing if they are to take the Intermediate title in 2020.