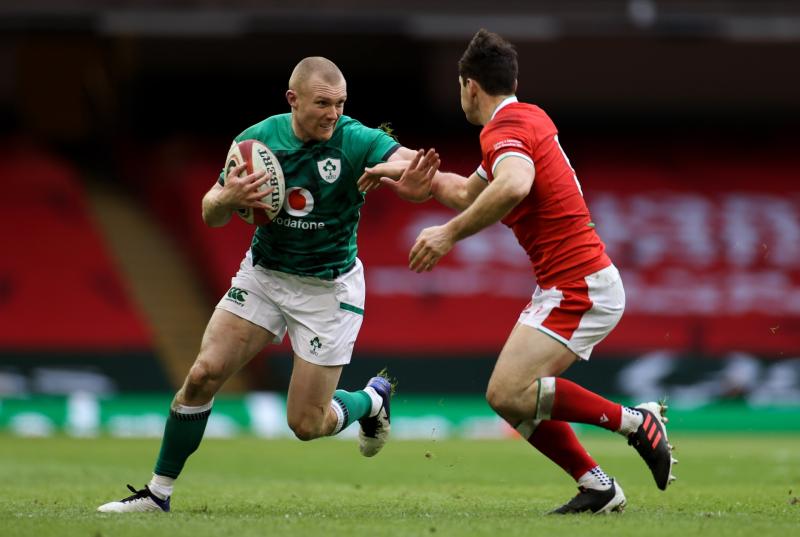 FOURTEEN-MAN Ireland opened their Guinness Six Nations campaign with a frustrating 21-16 defeat to Wales at the Principality Stadium, Cardiff on Sunday afternoon.

Ireland were left facing an uphill battle after losing flanker Peter O'Mahony to a red card in the 14th minute for a reckless clear-out at a breakdown.

To their credit, Ireland fought bravely for the 66 minutes following O'Mahony's dismissal and indeed, thanks to a smashing try from Tadhg Beirne, Andy Farrell's side held a 13-6 interval lead.

The extent of the physical effort on Ireland began to tell in the second half, however, as 15 unanswered points from the home side ultimately ended the visitors hopes of securing a first win in the Welsh captain since 2013.

Ireland lacked nothing in terms of industry and endeavour, despite playing with just 14 players for three quarters of a bruising contest. However, a combination of fatigue and some frustrating errors proved their undoing against opponents who were relieved to claim victory at full-time.

Andy Farrell's side must regroup now for a crucial home fixture with in-form France at the Aviva Stadium on Sunday next.

After a lively opening from Ireland, it was Wales who hit the front in the fifth minute when full-back Leigh Halfpenny slotted a penalty after the visitors were penalised at the breakdown.

Ireland were dealt a huge blow in the 14th minute when flanker Peter O'Mahony was red-carded for an illegal clear-out on Tomas Francis at a ruck. It was the correct call from the match officials.

Halfpenny then doubled the home side's advantage when he slotting his second penalty of the game in the 19th minute.

Ireland enjoyed plenty of possession during the opening 28 minutes, but Wales, with their numerical advantage, had their number defensively.

To their credit, Ireland did manage to open their account on the scoreboard when Sexton kicked a fine penalty from just inside the Wales half in the 29th minute.

Ireland continued to show good composure and patience to build phases and pressure as the clock ticked past the half hour mark and their endeavour was rewarded when a second penalty goal from Sexton tied the scores at 6-6.

Gritty Ireland continued to grow in the ascendancy as the half wore on and scored the game's opening try shortly before the break.

Centre Robbie Henshaw created the opening with a terrific break which included some nimble footwork. When Henshaw was eventually hauled down deep inside the Wales '22, flanker Van der Flier was on his shoulder to continue the move.

The Leinster man was stopped agonisingly close to the tryline. However, the ever alert Tadhg Beirne was on hand to seize possession and dot down from close range.

Sexton duly added the conversion and Ireland were full value for their 13-6 interval lead.

Ireland were rocked on their heels nine minutes after the re-start when George North crossed for the home side's opening tey after excellent work from replacement Josh Navidi had taken advantage of a disappointing Irish turnover.

Halfpenny missed the conversion, so Ireland did maintain an advantage, albeit a slender one at 13-11.

Ireland's error count began to rise as tiredness became a factor for the visitors. Wales took advantage when scoring their second try just before the hour mark when winger Louis Rees-Zammit finished superbly in the right corner. Halfpenny added the extras to help the home side into a more than useful 18-13 lead.

The visitors were unfortunate to fall two scores in arrears in the 65th minute when Beirne looked hard done by to be penalised deep inside his own '22. However, Halfpenny duly slotted the easy penalty award.

To their credit, Ireland fought bravely and forced a further penalty in the 72nd minute which replacement Billy Burns duly slotted to reduce the arrears to just five points.

However, time ultimately ran out on their hopes of opening their campaign with a victory. Ireland did have a chance late on to sneak victory. However, Billy Burns kicked his penalty for touch dead.