Skills the focus for Terry ahead of Leitrim's League return 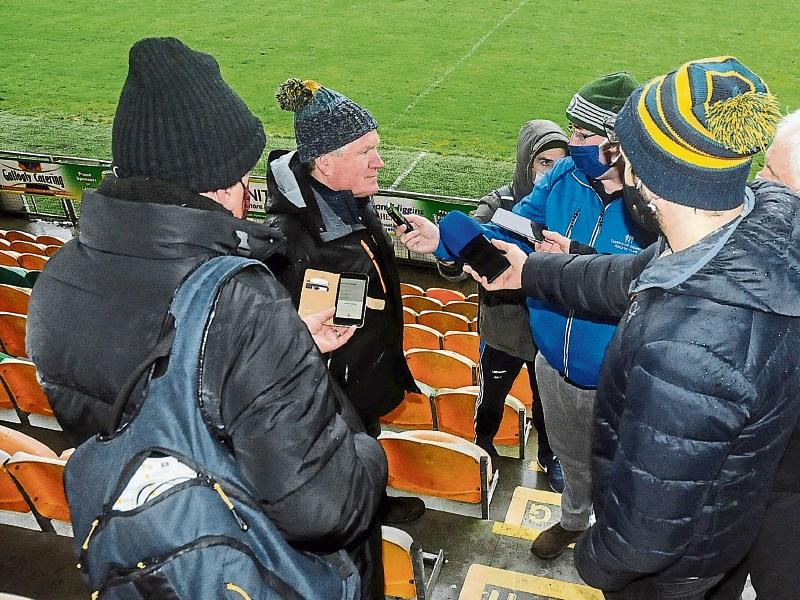 It is great to be back out the on the field” - those words from Terry Hyland probably sum up how every inter-county footballer and hurler was feeling last week after the return of group inter-county training under Covid regulations.

Leitrim’s footballers were back out on the field with a fitness test to gauge who had done the prescribed during the closed season and the Leitrim manager was happy with what those tests showed him.

“The lads have come back in good enough physical shape,” Terry told the Observer, “Now we have to concentrate on how we get on with our skills level and the only place you can do that is on the pitch. They have been doing the work, they did a test last week and we’re very happy with the results that came back.”

Terry had no worries that his players would slack off without the presence of coaches over the last four to five months: “The results show that the lads did do the work and as I said, that is what it is all about. When we put 15 guys across the line in a match, we trust them.

“At the end of the day, we have very little say in what happens in those scenarios when you’re not out in the middle of them and you’re not coaching them. So it was a case of we give out programmes, we trust them to do it, it shows where their ambition is and they’ve come back in good shape.”

Yet just the simple pleasure of being out on a pitch again, kicking footballs with teammates and interacting with them made it a very happy return for the Leitrim manager and his players: “It is great to be back out on the field - I always tell people that is what sport is all about, where you compete and where we compete is out on the pitch.

“That is why we want to get back out on the pitch because we can’t sort out our skills levels anywhere else, as you heard me say on many an occasion, it would be more a bigger issue for us rather than fitness.”

The players were equally delighted to be back: “It is great when you look out on the field and you have 30, 31 guys ready to go - normally this time of the year, back end of the national league, you’ve maybe 20 lads with guys with injuries or whatever.

“We got through the week without any major injuries, probably not as heavy a week training, this week, going forward but it will be all what we do on the skills side of things rather than the fitness side. Lads are delighted to meet, some of them wouldn’t have seen others in months.”

Even the aspect of meeting up and chatting with someone outside your bubble was a treat for everyone involved: “The only social aspect of anything at this current time is that you can get chatting to somebody. To be fair, you have WhatsApp and we did a fair few Zoom meetings and stuff. Modern contact is different to what it was 25-30 years ago, everybody is in a WhatsApp group now or whatever, chit chatting away.”

The delight in getting back out on the training field is tempered by caution in overloading players and avoiding injuries with the long layoff and a four week run-up to the resumption of games potentially a big issue according to Terry: “Talking of injuries, they are going to be an issue for everybody. Four weeks to get ready for a national competition is not enough time, no point in saying it is.

Yet even though he is concerned, Terry says each and every team around the country is in the same boat: “It is the same for everybody else, it is no different for us. Lads will pick up injuries on the back of it and they won’t have time to recover.”

There are no new faces in the panel because the Leitrim manager feels it wouldn't be fair to a new player trying to impress under current conditions: “We haven’t looked at anybody different that we had back in the last campaign because, to be fair, lads wouldn’t have the conditioning work done. It is not fair on them to bring a fella in, they’re not conditioned and they don’t perform and they say that fella is not up to it.

“You have to be fair to everybody, bring them in and put them on a level playing field so that they can compete with everybody else that is on the panel. Then they can make it from there or not make it.”