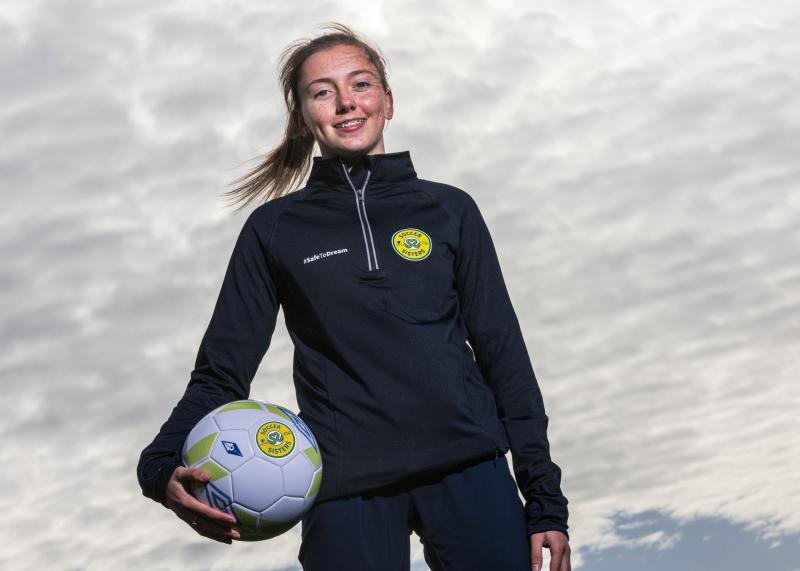 Two Leitrim clubs are set to host Aviva Soccer Sister Easter Camps this April in what is the first in-person Soccer Sister camps to take place since 2019. The three-day camps, launched on Tuesday by Republic of Ireland Women’s National Team duo Áine O’Gorman and Abbie Larkin, will take place over two weeks in April. The first camps take place between Tuesday April 12th – Thursday 14th and the second camps kick off on Tuesday April 19th, with the camps coming to a close on Thursday April 21st.

Leitrim’s Abbey Rovers and Manorhamilton Rangers are just two of the 100 football clubs nationwide that will be hosting Aviva Soccer Sisters Easter Camps, open to all girls aged 6 to 14, next month. For the first time Aviva Ireland will work alongside the Football Association of Ireland’s Football For All programme, which will host a camp in Irishtown, Co. Dublin that caters for children with additional needs.

In 2020 and 2021, Aviva Soccer Sisters pivoted to an online Virtual Skills Hub, which saw Irish International and Peamount United FC star, Áine O’Gorman deliver skills videos to over 6,000 children nationwide. The virtual skills hub supported parents by creating a safe space for their children to pursue their dreams, despite the ongoing Covid-19 pandemic.

O’Gorman teamed up with Shelbourne FC prodigy Abbie Larkin to launch the highly anticipated return of the Aviva Soccer Sisters Easter Camp. A graduate of the Aviva Soccer Sisters Camps, Abbie attended her first camp in 2012, and has since gone on to captain her country at underage level, while impressing with Shelbourne FC in the Women’s National League. The 16-year-old forward achieved her dream of representing her country by making her senior international debut in a Pinatar Cup match against Russia just last month.

International teammates and domestic rivals, O’Gorman and Larkin hosted a group of youth players from their respective clubs, Peamount United FC and Shelbourne FC, at FAI HQ in Abbotstown. Providing some top tips for their footballing futures, the pair advised the youngsters on what they can do to follow in their footsteps and achieve their dream of playing football for Ireland. The Shelbourne and Peamount youngsters then got the chance to play alongside their footballing icons. You can take a look at how they got on HERE.

Speaking at the launch at FAI HQ in Abbotstown, Senior Sponsorship Manager at Aviva Ireland, Lisa Bergin, commented: “We are extremely excited to see the return of the Aviva Soccer Sisters Easter Camps after a two year pause on our in-person camps. As proud supporters of the Women’s National Team, we understand the importance of the sustainable growth of football, and the importance of supporting football at grassroots level. We are delighted to continue our support of the development of the women’s game in Ireland, which with players like Abbie, is beginning to bear fruit. Aviva Ireland is also very proud this year to work alongside the FAI Football For All programme to provide a camp which will cater for children with additional needs, ensuring all children are safe to dream.”

Shelbourne FC and Women’s International Player Abbie Larkin, added: “Getting the opportunity to further develop my skills every year at Aviva Soccer Sisters was a massive part in my development as a player. I’m delighted to be given the chance to give back to my coaches and Aviva Ireland by supporting this year’s Aviva Soccer Sisters Easter Camps. I would really encourage any young players out there, who one day dream of playing for Ireland, to sign up at their local club. You never know where it might lead.”

Peamount United FC and Women’s International Player Áine O’Gorman said: “I’m thrilled to be supporting the Aviva Soccer Sisters Easter Camps again this year. These camps allow young girls to learn new skills and develop their confidence on the pitch whilst also having fun and making new friends at it. While it was a pleasure to deliver the Aviva Soccer Sisters Virtual Skills Hub over the last two years, I’m delighted to see the return of in-person camps to clubs across the country. I look forward to seeing who will follow in Abbie’s footsteps in the years to come.”

Each camp will take place over three days and will cost €30. Participants will receive an Aviva Soccer Sisters training top, football and a certificate on completing the camp. Registrations for this year’s Aviva Soccer Sisters Easter Camps are now opened and can be accessed via www.aviva.ie/soccersisters .

For more information and to keep up to date with this year’s Aviva Soccer Sisters Easter Camps, along with updates on the Football Association of Ireland’s Women’s National Team, follow Aviva Ireland on Facebook, Twitter and Instagram.