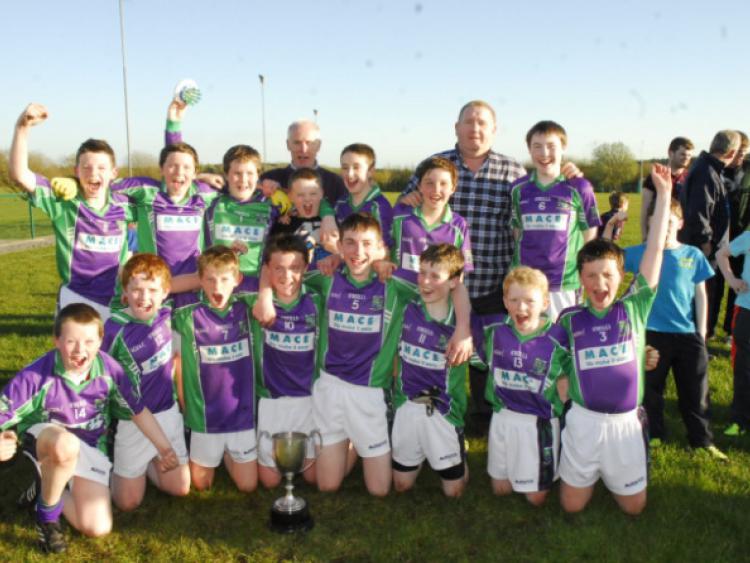 A well drilled and impressive Leitrim Gaels stormed to a dominant victory over Aughavas in the U14 League 13-a-side Final in Fenagh last Friday.

A well drilled and impressive Leitrim Gaels stormed to a dominant victory over Aughavas in the U14 League 13-a-side Final in Fenagh last Friday.

Leitrim Gaels quickly set their stamp on this game when the deadly Shane Rynn goaled and they never let up as they had too much strength all over the field for a brave Aughavas who just couldn’t match the balance and power of the Gaels.

Rynn added a second goal after eight minutes and despite Niall McCabe grabbing an excellent goal in the first half, Aughavas were left chasing the impressive Gaels who had too many aces in too many sectors of the field for them to cope with effectively.

What was most impressive about the Gaels was their well-drilled team-work and cohesiveness, obviously the result of good coaching as they moved the ball from one end of the field at speed and with accuracy and took their scores with steely efficiency.

It also helped that Leitrim Gaels boast a fine selection of talented players, none more so that Donal Casey who haunted the Aughavas team of his father and now Leitrim Gaels manager Joe.

Casey’s ability on the ball, evident in one fine score where he soloed right footed with the ball and switched feet to his left to fire the ball over the bar emphasised his real potential for the future.

As mentioned before, Shane Rynn was lively and showed a great finishing ability while Shane Finn was another player to catch the eye. Stephen Goldrick also demonstrated a real eye for a score as he ended up with 1-5. In defence, Donal Moreton and Ned Sweeney also impressed as did the hard working Jack Flynn.

For Aughavas, James Canning, Aaron Moran, Shafik Qubihi and Niall McCabe all had their moments but Leitrim Gaels proved far too strong on the day.

Leitrim Gaels set out their stall early and hit an unanswered 2-2 in the first eight minutes with Shane Rynn scoring 2-1, both goals coming after great passing movements while Donal Moreton added a point.

Aughavas hit back with an Aaron Moran point and a great goal from Niall McCabe, breaking two tackles and sidefooting the ball to the net.

Shane Finn and James Canning swapped points but disaster struck for Aughavas when Stephen Goldrick’s long range free dipped and went into the net off the keeper.

Donal Casey and Goldrick added points with James Canning on target for Aughavas as Leitrim led 3-5 to 1-2 at the break and the Gaels made sure of their win when Rian McAuley finished the ball to the net from close range in the very first minute.

Goldrick added two points either side of another Rynn goal to complete his hat-trick and although Aughavas briefly raised a cheer when Joey Kearney produced a great soccer style finish to find the net after eight minutes of the second half.

Aaron Moran landed his second point but Leitrim Gaels were never in trouble and Godlrick added two more points to seal the victory.