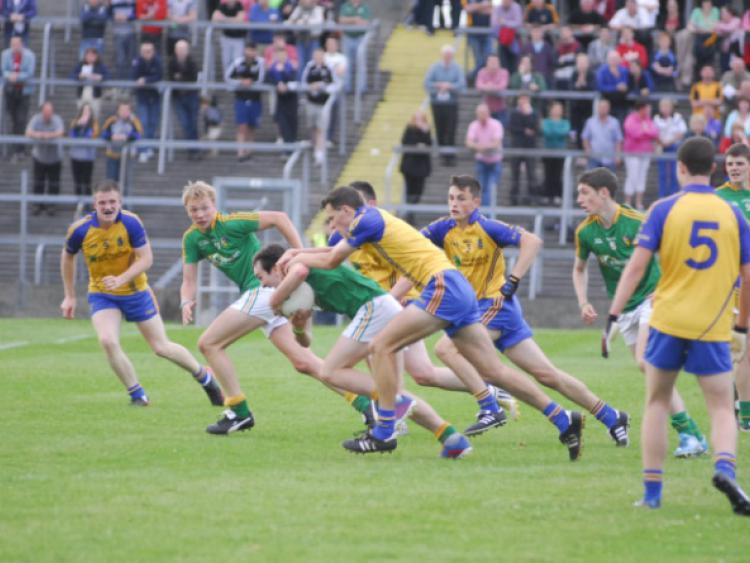 The dreams of a Connacht Minor Final came to an end for Leitrim on Saturday evening in Dr Hyde Park as the hosts started and finished strongly.

The dreams of a Connacht Minor Final came to an end for Leitrim on Saturday evening in Dr Hyde Park as the hosts started and finished strongly.

While the start and the finish were not how Leitrim would have envisaged the game, there were plenty of positives to be taken from the day, with team manager Enda Lyons quick to praise the efforts of his players after the game.

Roscommon had their homework done as they ensured Leitrim captain Mark Plunkett had a quiet evening while any potential defensive weakness was identified and exploited. They were mobile and threatening in attack and it took just 80 seconds to illustrate that threat.

Noel Gately pounced for the opening score when he capitalised on some hesitancy in the Leitrim rearguard. David Connaughton’s delivery should have been dealt with by the Leitrim defence but the failure to do so meant Gately had a clear sight of goal and he dispatched his shot past Michael Gallagher.

The early lead was extended when Eoin Fallon pointed with Leitrim chasing shadows in the early exchanges.

As the game progressed Leitrim grew into the game and the opening score for the green and gold arrived in the seventh minute when Conor Gaffney converted a free and that was quickly followed by a Ryan O’Rourke point.

Roscommon replied with a Luke Carty point but Leitrim were now playing with greater fluidity, urgency and crucially composure.

Oisin Madden, who had a busy evening in a defensive capacity also looked dangerous when surging forward and he pointed in the 14th minute to reduce the deficit. A minute later the gap was reduced further when one of Leitrim’s stand out performers, Conor Cullen dissected the uprights with a brilliant left footed effort.

Even though Leitrim were continually improving, Roscommon were always a danger when they attacked and Noel Gately pointed to leave two between the sides.

Having fought valiantly to get within striking distance Leitrim were dealt a blow when Roscommon struck for their second goal in the 18th minute. All attention was on Luke Carty as he ran at the heart of the defence, meaning Hubert Darcy was unmarked in front of goal. By the time the danger was noticed it was too late and Carty’s delivery found Darcy who had the straight forward task of dispatching the ball to the goal from close range.

Once again Leitrim regrouped and they were rewarded for their efforts with a penalty seven minutes before the interval.

Conor Cullen’s brilliantly disguised diagonal ball was played perfectly into the path of Oisin Madden who was fouled. With no hesitation a penalty was awarded which Mark Plunkett expertly dispatched.

That score reinvigorated Leitrim and points quickly followed from Luke Murphy, Peter Reynolds and a Murphy free meaning with two minutes of the half remaining Leitrim led by a point.

However the lead was not to last long as David Connaughton and Kevin Smyth (free) pointed in quick succession meaning Roscommon led 2-5 to 1-7 at the break.

Leitrim began the second half brightly with Donal Feely pointing after Gary Fowley’s pass and they regained the lead five minutes after the restart when Conor Cullen struck again.

However, Roscommon were still very dangerous and they were level again when Gately’s perfect pass found Hubert Darcy. The goal was in his sights but he struck the ball too hard and had to settle for a point.

Roscommon edged back in front when Kevin Smyth found Darcy and again the full-forward was able to slot his shot over Michael Gallagher’s crossbar and they extended that lead when Killian Bannon pointed after a good passing move.

Having been under plenty of pressure Leitrim replied in style with a passing move that began with Pearse Dolan and was finished with a Conor Gaffney point.

As the game opened up Evan McGrath found a lot more space and he was unlucky not to score Roscommon’s third goal when his shot hit the crossbar but Kevin Smyth was on hand to point the rebound.

A Conor Gaffney pointed free with six minutes remaining meant there was just two between the sides but as the Leitrim players tried to rid themselves of cramp the home side finished strongly with four unanswered points to book their place in the Connacht Final.