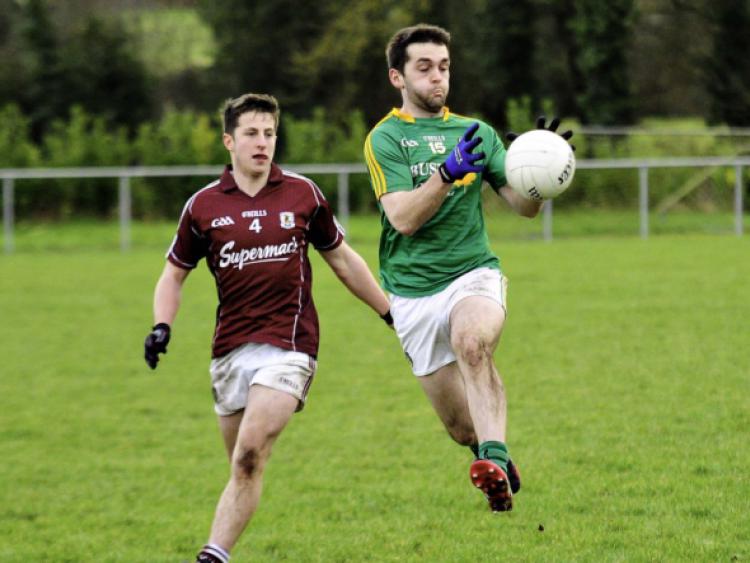 Leitrim’s brave bid to advance to the Hastings Cup final fell just short in Oliver Lynch Memorial Park Abbeylara on Saturday afternoon when Galway scraped a one point win in added time at the end of extra-time.

Leitrim’s brave bid to advance to the Hastings Cup final fell just short in Oliver Lynch Memorial Park Abbeylara on Saturday afternoon when Galway scraped a one point win in added time at the end of extra-time.

After 80 minutes plus of football, Galway’s charismatic leader and full-forward Gary Kelly proved to be the difference between the sides when he fired over a late point from 20 metres out on the right wing to ensure a win by the narrowest of margins.

Kelly had proved to be inspirational figure for the young Tribesmen when constantly moving into open space up front and then notching up crucial scores, mostly from play but one also from a free.

After a Herculean effort, the result was a deep disappointment for Leitrim. But manager Shane Ward and his mentors as well as their team still had many positives to take from what was a gut bursting performance that nearly achieved victory.

In the opening exchanges, Galway were very impressive and dominated play for almost the first ten minutes when 90% of the action took place in the Leitrim half.

Only for some tenacious defending by Leitrim, Galway should have been further ahead at this stage than 0-2 to 0-0 after Joe Donnellan and Paul Mannion put over a point apiece for the Tribesmen.

After being under a barrage of pressure, Leitrim began to feel their feet when their playmaker-in-chief Donal Wrynn converted a tenth minute free. The County Senior star had the sides on level terms three minutes later when he put over a 45 metre free.

Galway responded with another onslaught of pressure over the next six minutes and forced Leitrim to concede a two close in frees, which Barry McHugh tapped over.

Leitrim enjoyed the better of the exchanges in the final ten minutes of the first half and got on level terms again by the 26th minute after Donal Wrynn found the range from two frees.

A high ball into the Galway goalmouth just prior to the break was broken down by Donal Wrynn to Gary Plunkett but with a goal at his mercy, the Aughawillan man blazed his effort just over the bar to put Leitrim ahead by 0 -5 to 0- 4 at halftime.

From the restart, Galway mounted an all-out assault on the Leitrim posts which saw them quickly level proceedings and then go onto grab a fully deserved three lead by the 39th minute.

Gary Kelly played a leading role in the Tribesmen’s cause in this phase of play whipping over two points from play and converting a free while Ciarán Molloy also shot over from play.

After weathering the early second half Galway storm, Leitrim managed to get back into contention by the 46th minute thanks to a point apiece from Conor Gaffney and Felim McHugh that left the minimum between the sides.

Galway went two points up in the 47th minute when Kelly fisted over a point after a ball came back off the Leitrim upright to the Tribesmen’s full-forward.

But Leitrim dramatically regained the lead in the following minute when Donal Wrynn fired in a shot from 25 metres out that dipped under the crossbar and into keeper’s Tadgh O’Malley’s net. Wrynn extended Leitrim’s lead to two points when he tapped over a free two minutes later.

But Galway dominated the final ten minutes and forced extra time with points from Joe Donnellan in the 54th minute and Eamon Brannigan three minutes later.

Leitrim grabbed a two point lead in the opening three minutes of the first period of extra time after Conor Gaffney shot over from play and Donal Wrynn put over a 45.

Galway got back on level terms by the extra time break with points from Ger Gibbons and Joe Donnellan. After that Galway went ahead for the first time in extra time when Gary Kelly put over a 75th minute point.

Wrynn levelled again five minutes later when he converted his seventh placed ball of the afternoon but as the game entered added time, Galway worked the ball downfield to Gary Kelly who hit over an 82nd minute winner for the Tribesmen.