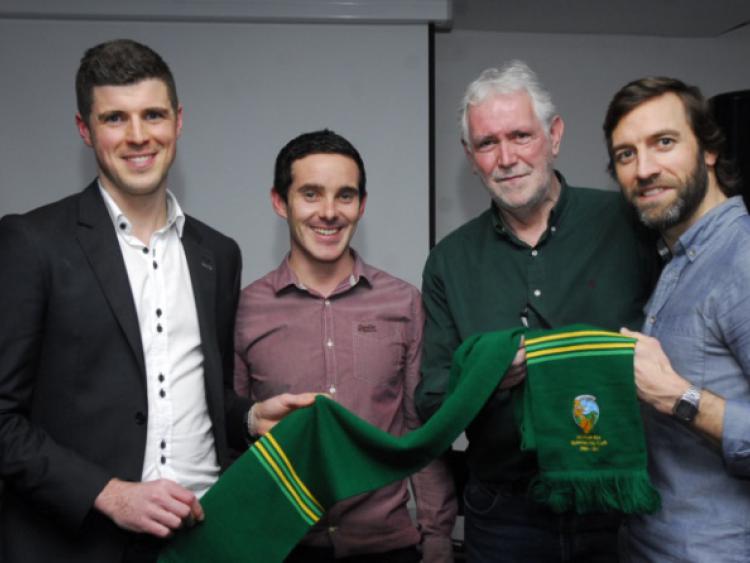 Croke Park was invaded by Leitrim hordes again last Thursday for the annual launch of the Leitrim Supporters Club.

Croke Park was invaded by Leitrim hordes again last Thursday for the annual launch of the Leitrim Supporters Club.

From the humour and musical entertainment of Charlie McGettigan to the passion of new Senior team manager Shane Ward and the revealing insights into the life of a top class international athlete from Colin Griffin, it was another evening that celebrated all that is Leitrim in the capital.

With members of the current Senior and U21 squads attending, representing the present and future of Leitrim football, the past was evident in the likes of former county stars Ronan Hazlette, Ciaran Mahon and Thomas Quinn while the greatest Leitrim footballer of all time, Packy McGarty, attracted plenty of people just coming over to get a picture taken or shake hands.

Drumshanbo’s Charlie McGettigan brought the evening to the close with three fantastic songs interspersed with a host of hilarious stories, a fitting end of an enjoyable and informative evening.

County Board Chairman Terence Boyle, addressing his first gathering of the Supporters Club, spoke of his delight in seeing so many at the launch - “It is great to see so many standing up around the room. Coming in as the new Caothaoirleach, it is very refreshing to see so much support for Leitrim GAA from our diaspora here in Dublin. It is 29 years going and it is going from strength to strength.”

Colin Regan’s question and answer session with Ballinamore’s double Olympian Colin Griffin and manager Shane Ward gave a glimpse into the world of high performance sport with the commitment and dedication of Griffin earning the rapt attention and obvious admiration of the 150 plus strong crowd.

But it was the 15 minute presentation of new Leitrim manager Shane Ward that most engrossed Leitrim’s diaspora last Thursday, so much so that you could hear a pin drop as he outlined some of his philosophy and hopes for the future ahead of next Sunday’s first Allianz League Division 4 clash against Longford in Pairc Sean Mac Diarmada (2pm throw-in)..

“Leitrim football is at present, in my professional opinion, progressing in the right direction,” Shane told the crowd, “The development squads are improving from year to year, we have lots of talented players I’m delighted to report and I don’t exaggerate in any way.

“My role in Leitrim at present is not really to deliver a secret or deliver a short term gain and I want that to be very clear among us as we are fellow county people here. I am not coming with the idea of short term gain, of doing something fantastic and leaving. I’m very much looking at putting a sustainable structure in place, putting a plan in place for Leitrim GAA going forward.

“The way GAA has gone, the way football has gone in this country, if you want to compete at the top, top level, you have to be very professional is your approach, you have to be structured and planned so that sometime in the future that plan will kick into gear.

“If we don’t do this, we run the risk of being left behind as most of the top teams are striking out on their own and teams that are down the pecking order have to ensure that we maintain our structures and work really hard to get up there. My backroom team and I have made a commitment to build a sustainable structure for Leitrim football moving forward into the future.

“Our players are teachers, accountants, engineers, company directors and, like so many in this room, are successful in their daily lives. We will work to embrace this positivity and this positive trait in our players as time goes on.

“The players will flourish if we empower to become consistent in this manner. If they can be so competitive and so successful in their personal life, surely we can engage and encourage them to show that confidence and ambition on the football field.

“A period like this can be exciting and yet so challenging, we are talking about embracing those variables in Leitrim that are so strong and positive and converting them into an approach and commitment to football.

“All of us have a real part to play, we can focus on the positive and encourage the change, the players will be able to release their fears in the face of adversity and be the best they can be to reach their full potential.”