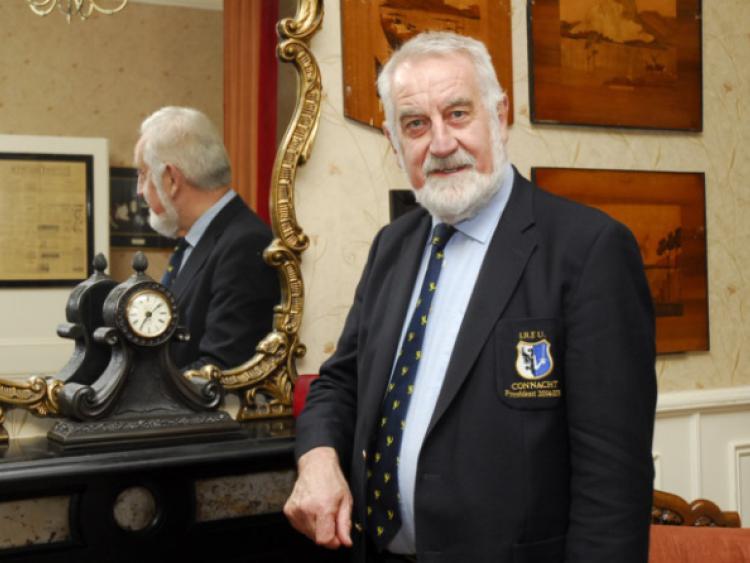 As a proud Leitrim man, there was no doubting the pride Connacht Rugby President Adrian Leddy had at the launch of the new Carrick-on-Shannon RFC crest last Friday.

As a proud Leitrim man, there was no doubting the pride Connacht Rugby President Adrian Leddy had at the launch of the new Carrick-on-Shannon RFC crest last Friday.

A clearly delighted Adrian told the Observer “In my current role as President, I’m delighted with the progress of Carrick-on-Shannon RFC and I’m delighted to be part of this occasion here tonight, they are putting out their development plan for going forward.

“From a Connacht Rugby and IRFU point of view, we will give Carrick every support going forward. It is a great tribute to Carrick-on-Shannon, an outpost of rugby, that they have developed the game here.

“They have a very difficult situation in relation to getting grounds here and to develop the game here as well as they have done, they have their Senior team, they have their Ladies team and they are very good at underage level. They are a developing team.”

The growing popularity of the game, highlighted by the emergence of Connacht stars Shane Leyden from just outside Carrick, Robbie Henshaw and Jack Carty means that Adrian’s job as President, which ends next May, has been an exciting and busy one.

“It was a great honour to get the position and I must admit that I am enjoying the role immensely. We have made huge strides within Connacht, we have a very good academy. The Connacht Academy has been recognised as one of the best academies in the country.

“We are moving in the right direction within Connacht and as regard column inches in the paper go for the last number of months, we are getting as much coverage as the other provinces.”

And that success comes with a local link as Carrick’s Shane Layden is making a name for himself with the Senior side - “We’re very proud of Shane, Shane played for the Connacht Eagles team against Leinster during the week where Connacht had a very convincing victory and Shane had a strong, good game for Connacht.”

And it is players like Shane Layden who should encourage the future development of Carrick RFC according to Adrian - “I would like to see them to be able to compete and move up in the Divisions within the League and get maybe a stronger structure within their playing pool. I can see that with the amount of development at underage level that a lot of these youngsters will come into the game.

“They see the strides that Shane Layden has made and maybe there will be a lot of future Shane Leydens in Carrick-on-Shannon.

“I think it is very important that local schools take up the game, it is very good for young boys and girls to get involved. No matter whether they remain involved with Carrick or they travel across the world, they can walk into any club and it is a great education in itself, the comrademanship, the development for any youngster, rugby is an exceptional from that point of view.

“Ladies absolutely love the game, it brings more of a vibrancy about the club when you have men and women involved in the club, it helps with the running of a club, it makes it more attractive for the fellows to come in and stay about the club.”