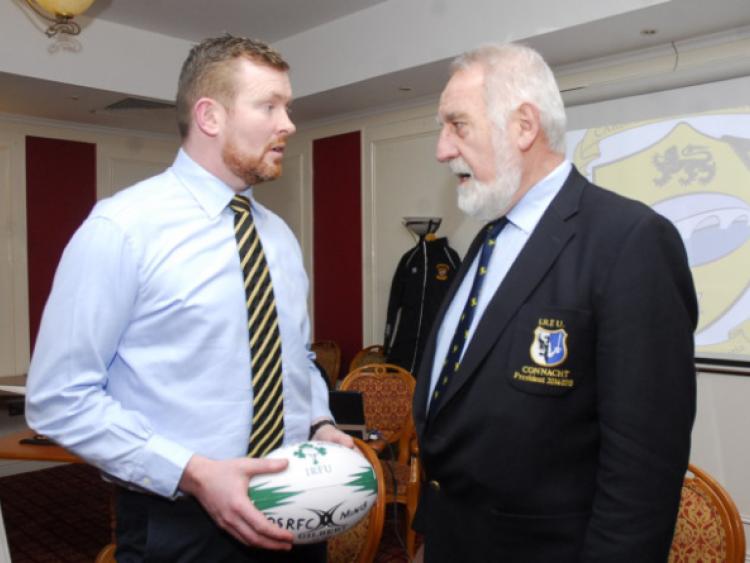 The sense of a new era for Carrick-on-Shannon Rugby Club was very evident last Friday night in the Bush Hotel as the club launched its new crest.

The sense of a new era for Carrick-on-Shannon Rugby Club was very evident last Friday night in the Bush Hotel as the club launched its new crest.

Club President Sean McKeon spoke of a club making huge strides as they are in the process of developing club grounds at Keeneghan in Carrick-on-Shannon while the club’s teams are flourishing.

Speaking to the Observer, Sean said “Any night that you change what you are embracing about the club, as in the club crest, is always a big deal as far as we’re concerned. Also tonight, we are launching the Sports Prediction Quiz, the total prize money is €1,500 and this is all part of our fundraising campaign.”

The ongoing development of the club’s grounds is a major effort for the club but the focus is very much on the field as well - “We’re always looking where are we going to be playing next week and we’d like to think that we have a home as such and it makes it a little bit easier to concentrate on playing rugby rather than looking for somewhere to actually play games.

“It is not easy, we have a lot of funds to raise and in the current climate with unemployment and emigration, it is never easy. We’re fighting the fight and we’re trying to do as much fundraising as possible.”

Carrick RFC’s catchment area covers south Leitrim and north Roscommon and the Club’s new crest sums up the ethos of togetherness of the two counties as Sean explains - “If you start at the top, the Carrick-on-Shannon banner is where we’re from, where we play rugby and then we have the lion from the O’Rourke Clan of Leitrim, something that people recognise as Leitrim.

“On the bottom is the Cross of St. Coman which would represent Roscommon and we’ve incorporated them around the original crest, the shape of a rugby ball crossing the bridge of the Shannon so the Shannon is bringing both counties together, not killing each other!” joked Sean.

“We try to get on with each other, a little bit of banter around championship time in June and July because most of our lads are dual players. Underneath the crest is our motto which translates as ‘In Unity, there will be victory’.

“It is a big area but it is kind of rugby desert at the same time and to cultivate that isn’t easy and it is something we have to work on. We’ve got great volunteers, some really strong people and very youthful committee with great ideas and we’ve got some older guys there to hold us back and pull in the reins when we get out of hand. ”