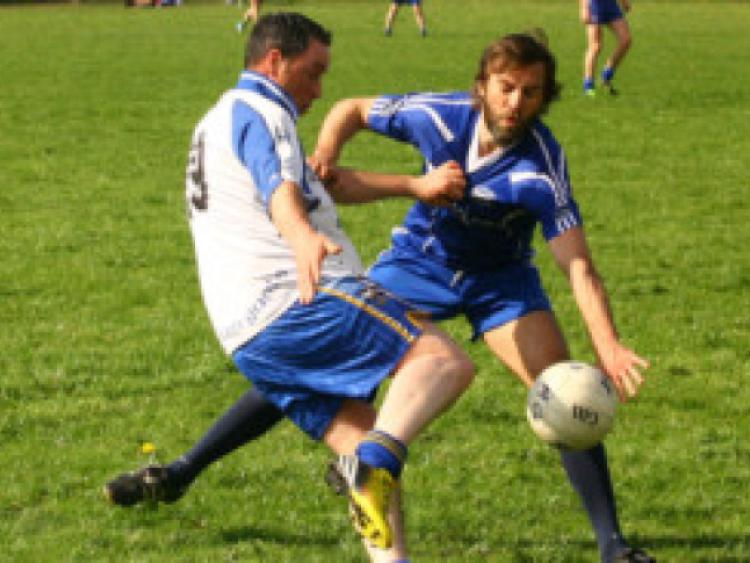 With the weekend that was in it I decided to resurrect my playing career with Melvin Gaels on a beautiful Easter Sunday morning. I’ve been trying to keep myself well occupied with exercise as I know I feel best when I do.

With the weekend that was in it I decided to resurrect my playing career with Melvin Gaels on a beautiful Easter Sunday morning. I’ve been trying to keep myself well occupied with exercise as I know I feel best when I do.

It’s been important to me to have that outlet since I finished playing ball and it’s sated the appetite for sport to a large degree while keeping me reasonably sane. I’ve been running Howth Head trail fairly regularly and I’ve been pushing myself pretty hard when I do. I could feel a solid baseline of fitness returning and there’s no better time to be training than when you’re in that zone.

I headed home to Leitrim for the weekend and took advantage of the countryside. I ran some of Ben Whiskin on Good Friday ascending from the Horseshoe side. It’s a steep but enjoyable run with a great reward when you reach the top and enter the once industrious environs of the old Baryte mines. The rusting remnants of the pulley systems and the miners’ shelters afford an eerie post-apocalyptic ambiance to the place, especially when capped with the wispy clouds that seem to catch on the cragged limestone.

Wind and erosion has pealed back the bog toupee exposing the dirty white rock as patchy scabs on the mountain’s head. The effect brings a lunar landscape to mind. A little further on I rest and contemplate a while at the Celtic cross erected for the Marian Year of 1954. The clouds obscure the full extent of the breath-taking view that this vantage point usually offers over the Glencar Valley and into Sligo Bay.

Baryte wasn’t the only fuel extracted from this location – the old cut-away banks could tell a few stories about the men that cut turf there too. I thought about the passing of the intervening 359 million years and how the passage of our lives are less than the blinking of an eye in this world’s experience. You might as well make the most of it when you can.

That night I enjoyed a few beers and some banter to celebrate my friend’s 40th birthday; the next day I thought some coastal wind would help blow out the cobwebs. I took off across the sand dunes from Mullaghmore with no particular destination in mind. My legs and my curiosity brought me to Mermaid’s Cove. If you are looking for a completely different running environment I couldn’t recommend this option highly enough.

The undulating sandy drumlins provide a constantly changing landscape and vista, enveloping you in something dreamlike when lost amongst the endless dancing dune grass, while opening to reveal the wild realities of the Atlantic coastlines of Sligo, Leitrim, and Donegal as you pass along the cliff edges. The soft underfoot conditions are forgiving on old joints, but you have to keep your wits about you to avoid the more than occasional rabbit holes.

When finished I settled on a grassy knoll to cool down and to play with my running companion Twister, one of mum’s dogs named after his energetic approach to life. We get on pretty well. What more could you want on a day like this? I asked myself. Then it came to me: you know what, I’d love an ould game of ball. The juniors were due to play Glenfarne-Kiltyclogher in a home fixture the next day (Sunday). I wondered how they were fixed for numbers.

I’m a firm believer that age shouldn’t dictate one’s activities to any great extent, with certain exceptions. My father was a living example of how remaining young at heart will increase your capacity to act the young buck well into your twilight years. Looking after yourself and minding what you put into your body will help too. Accepted, my joints aren’t what they should be due to some breaks and collision injuries, but they’ve been responding well to running on some pretty challenging terrain. On the flip side I also want to ensure that I can remain active for as long as my body will allow it, and another major injury would not enhance that aspiration.

While I played competitive soccer in Dublin last year I hadn’t played a game of Gaelic football in a year, having dusted off the boots to play in a testimonial match for the late Peter Feeley on Easter Sunday 2014. Before that it had been another two years. The sunshine that awoke me on Sunday brought with it a suggestion that spring had sprung. My mind made up to play and following Spring’s suit, I sprung out of bed to a cacophony of creaking joints. The mind was willing, but was the body able?

It proved just about that. I was well used to being the oldest player on a team, but in those days I would have played for years with many of my younger team mates. There were only two contemporaries on Sunday’s team, Gareth Foley and Diarmuid McGowan, our captain, while our manager Peter O’Reilly is also of my vintage. It was good to see another seasoned campaigner Joe Keaney lining out for his parish too.

It was interesting sharing the dynamic of football with those friends again. It was also invigorating to be part of a team that contained so many entirely new team mates too. Many of them were nearly as young as I was when I started playing intermediate football with the Gaels 24 years ago. The life cycle of the club continues. And so does mine.