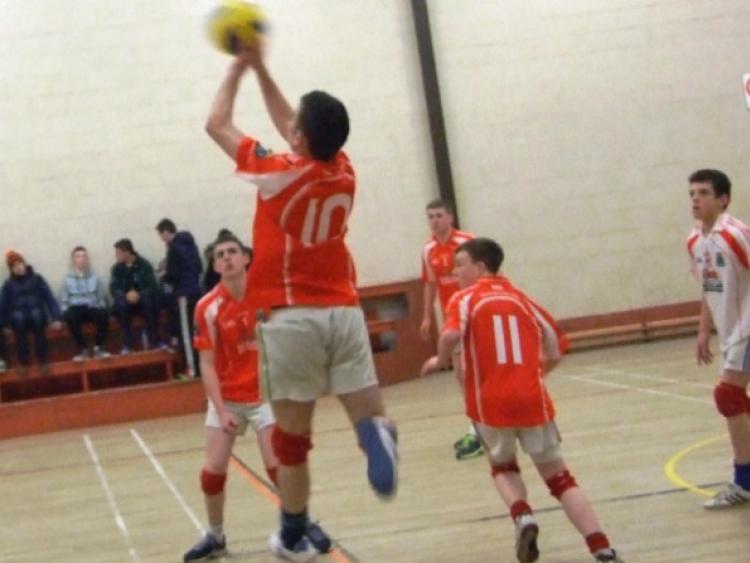 Drumshanbo VS celebrated their National cadette semi-final coming of age by qualifying for their 21st A semi-final.

Drumshanbo VS celebrated their National cadette semi-final coming of age by qualifying for their 21st A semi-final.

This is seven more times than their nearest school competitor. Drumshanbo are playing in their 27th consecutive cadette A championship, 11 ahead of the next longest school. Drumshanbo, Elphin and Mallow A and B were fighting for two remaining semi-finals.

Its hard to believe that a B team could be a threat but this Mallow team had beaten all other schools in the country including Drumshanbo A in the Junior cup last year and they immediately proved this by acing straight away in the match.

But then, lead by a Gareth Higgins run of serves, and set up by Kian Gibbons, Jordan Earley hit a block and two winning spikes interspersed with winners from Callum O’Hagan Moore. Kian Gibbons followed up with 6 serves with Kevin Moran now setting up Earley and Moore and Drumshanbo were 16-5 ahead.

Mallow, as they had done last year steadied and took the next five points. But back with the Gibbons/Early/Higgins attack Drumshanbo drove to 20-10 and held off a late rally.

Cian Beirne came on second set and from an Earley pass immediately set up Higgins for a winner and buried down two free balls at the net himself. Errors allowed the Cork side close at 9-6 but Earley aces and Moore winners from Moran put them 18-10 ahead. Fergal Guihen then finished them off with run of six serves.

With semi-final places secured for both teams, this was the final match to decide top four ranking. It featured some of the players that featured in the classic senior semi-final. In that semi Drumshanbo gained the early lead in each set and held on.

This time it was Mallow who got the early leads shooting 8-4 ahead thanks to poor play from Drumshanbo. Finally Thomas McManus, whose receiving and back court cover was steady throughout, sent a perfect pass to Gibbons who set up for Moore to hit one hot winners. A Moran Block followed but Drumshanbo then fell 8-14 behind.

But then Drumshanbo cadettes play brilliantly. The won an enthralling rally and on a Gibbons service run helped by 2 Moore winners they reduced the gap to 1 at 17-18 and again 20-21 and 22-23 with winning hits from Arigna’s Earley and Guihen.

Unfortunately Mallow slipped back to take the set and immediately they roared away to a 14-9 lead in the second set. Beirne and Luke Tuite came on. Beirne had run of six serves with Tuite hitting hard at the net and that closed the gap to three at 16-19.

But Mallow made very few errors and roared ahead 23 17 to create an large gap insurmountable lead. Kevin Lynch came on at the end but too late to alter the tide.

The senior result was avenged. Mallow played very well and should do well in their semi-final. But Drumshanbo are also a serious side and when they click they fear no team.