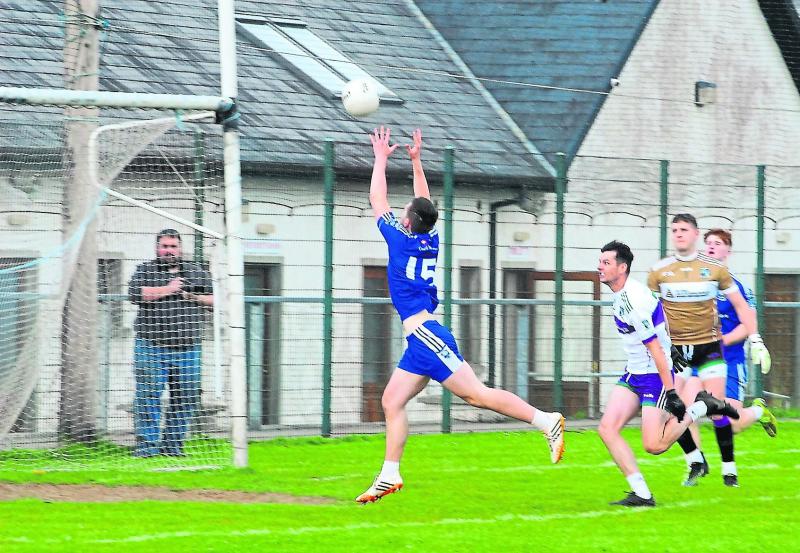 Last year's top two teams Ballinamore Sean O'Heslins and Mohill again showed they will be the teams to beat in 2022 when they recorded impressive victories last weekend in the third round of the Masonite Leagues.

Defending league champions Mohill again showed they will be in the mix for the Fenagh Cup when they ended St Mary's Kiltoghert's unbeaten run, scoring a comprehensive 4-10 to 1-8 victory over the Carrick men. County stars Keith Beirne and Jordan Reynolds accounted for the entirety of Mohill's tally with Beirne, on pundit duty with RTE on Sunday for the Tailteann Cup, scoring an incredible 2-10 of which just one point came from a placed ball.

Mohill led 3-5 to 1-4 at the break but they were thankful to two goal-line clearances from Shane Quinn to preserve their advantage while St Mary's tried four different markers on Beirne but were unable to curtail his influence.

County Champions Ballinamore Sean O'Heslins picked up their second win on the trot with a comfortable 2-17 to 0-9 victory over Annaduff on Friday. The champions led 0-11 to 0-3 at halftime and a goal just after the break ensured there was no possibility, however, remote of a fightback from Annaduff.

Leitrim Gaels confirmed their place among the elite as they easily dispatched Melvin Gaels 3-18 to 0-5 on Saturday evening. The scale of the victory pushed the Gaels into second spot in the table thanks to a massive scoring difference of plus 41 points with St Mary's third on plus 20 and then Aughawillan and Ballinamore on plus 14 points.

Aughawillan continued their fine start to the season with a 13 point victory over Glencar Manorhamilton on a 5-14 to 1-13 scoreline. Aughawillan started with a bang, finding the net in the first minute but Glencar Manor hit back with a goal on six minutes from Donnacha Devaney. However, Aughawillan notched a second goal a minute later and they would lead 2-9 to 1-7 at the break.

A third goal six minutes into the second half opened an eight point gap and they would add two more majors, including one from Pearce Dolan to seal the win.

Glencar Manor will get the chance to get back to winning ways when they face Annaduff, with no wins from three games, in the next round of games on July 2, while Melvin Gaels host Ballinamore and Mohill will visit Aughawillan. The big game of the round takes place a week earlier with the parish derby of St Mary's Kiltoghert and Leitrim Gaels next Saturday evening in Pairc Naomh Mhuire.

In Division 2, Fenagh St Caillin's are out on their own at the top of the table thanks to their 4-14 to 1-10 victory over their Aughnasheelin neighbours. Fenagh led 1-9 to 0-6 at the break but ran in three goals in the second half, with one from Conor Cullen in response. Fenagh remain unbeaten with three wins from three outings and will face Ballinaglera in their next outing.

Gortletteragh got back to winning ways when they outlasted Drumreilly 0-14 to 1-8 but suffered a blow with an injury to county star Jack Heslin. The result leaves Drumreilly without a win after three outings but their form seems to be improving.

2021 Intermediate winners St Patrick's Dromahair picked up their second win of the campaign with a hard fought and high scoring 2-16 to 1-14 win over Allen Gaels. The Drumshanbo men led 0-10 to 1-5 with the wind at the break but Dromahair worked themselves into a two point lead as the game entered injury time. With the Gaels pushing for scores, Dromahair picked off three late points to seal the victory.

In Division 3, Kiltubrid are the early pacesetters with three wins from three outings as they scored an impressive 0-25 to 2-6 victory over Eslin last weekend. Scoring 25 points in any game will certainly please the Kiltubrid management but the scores were level at 1-6 to 0-9 at the break before injuries took their toll on Eslin.

Aughavas picked up their second win of the campaign but probably not in circumstances they would like as neighbours Cloone conceded a walkover. Drumkeerin picked up their first win, having lost against Aughavas in their opening game, when they hit the net five times to get the better of Glenfarne Kiltyclogher on a 5-9 to 1-12 scoreline, the nine point victory for the men in maroon.

In the Reserve Division 1, St Mary's Kiltoghert returned to the top of the table with a massive 8-14 to 1-13 victory over Fenagh St Caillin's while Glencar Manorhamilton's second string got the better of their Drumkeerin counterparts 1-13 to 1-10. The Carrick men are three points clear at the top of the table, having played a game more than Mohill & Sean O'Heslins.

In Championship news, County Board officials have revealed that the draw for each round of the club championships will take place on the Sunday evening preceding the following week's games with the first round draw on Saturday August 6, after the conclusion of the Masonite Division 1 League Final in Avant Money Pairc Sean Mac Diarmada.