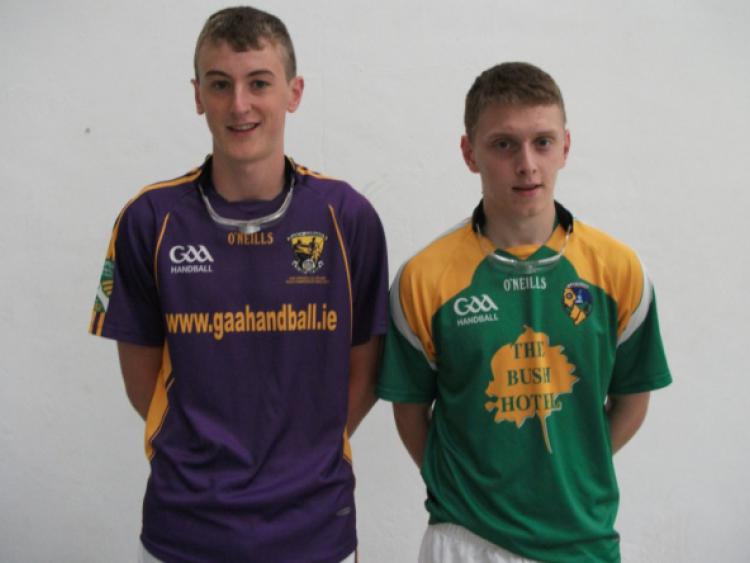 The Fenagh player was comprehensively beaten by Wexford’s Galen Riordan on a scoreline of 5-21, 10-21 in the M Donnelly 60x30 Minor Semi-Final, hosted expertly by the newly opened Fenagh Handball Alley last Sunday.

Hopes were high that Doonan would make it a great day for Leitrim and Fenagh handball but it wasn’t to be.

From the start of the game, Riordan looked impressive with a powerful serve that Doonan couldn’t get to grips with and to compound matters further, the Wexford player could kill the ball any time he got the opportunity.

In the first game, aces were hard to come by for Doonan as Riordan was on top of the game in all aspects, from his power serve to his dominance in the rallies and his first class kill shots into the right hand corner.

Doonan could never pull more than one ace whenever he got serve and the game simply slipped away from him.

However, midway through the game Riordan pulled away and closed out the match to secure his place in the All-Ireland Minor Final.

In what was a bad weekend for Leitrim handball, Drumshanbo’s Leo Logan lost out to Kilkenny’s Brendan Burke in the 60 x 30 Junior B semi-final on a score line of 6-21, 8-21, the match being played in Inch’s Point in Kilkenny.

In the Connacht 60 x 30 U-17 Championship Quarter-Final, Fenagh’s Aaron Scollan was defeated by Jason Earlis (Castleconnor Sligo) on a score line of 15-21, 10-21

This weekend, the action turns back to the Provincial scene as the Connacht 60 x 30 Juvenile Championship semi-finals take place with Leitrim’s Cormac Scollan (U-12), Alan Doonan (U-15) and Jarlath Scollan and Alan Wrynne (U-15 Doubles) in action and hoping to reach the finals.