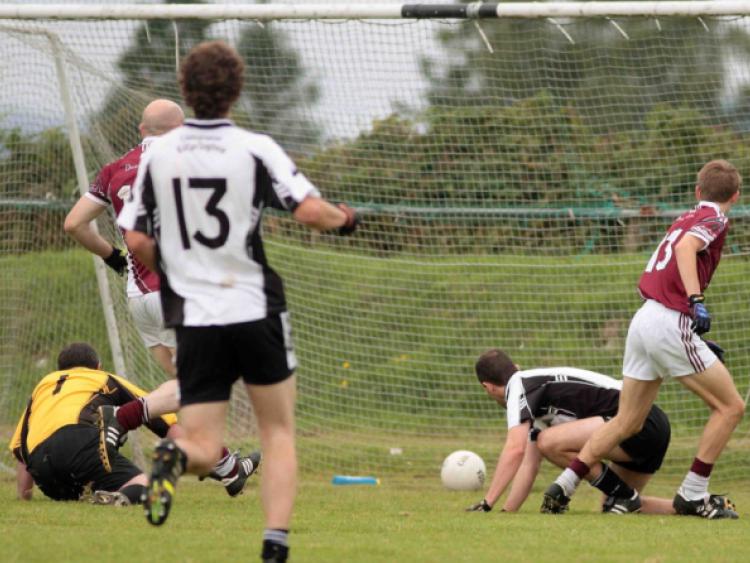 The GWP Intermediate Championship QuarterFinal replay produced an epic encounter in Shane McGettigan Park last Sunday, a high scoring thriller that twisted and turned from the first whistle to the last.

The lead changed hands five times during a pulsating game which featured a host of fabulous points from both teams and lots of drama to keep the crowd enthralled.

Glenfarne/Kilty’s goal came with less than two minutes left on the clock, sub Daire Clancy flying in to meet a crossed ball from the corner from Fergal Clancy, a score that propelled them in front at the crucial juncture.

In truth, Glenfarne/Kilty were deserving winners of the contest - they dominated open play for long periods as Drumkeerin were restricted to two scoring bursts, one in each half, but Glenfarne were more than equal to the task.

Drumkeerin were in fact trailing by four points early in the second half when they struck for 1-2 to go in front, the goal from Jamie Langan finished at the second attempt.

Key to Glenfarne/Kilty’s victory was their immense work-rate and despite players dropping with injury and a very small playing pool, the Men in White & Black ran themselves ragged from start to finish.

Allied with their work-rate was a disciplined and organised outfit, their intelligent use of the ball out of defence and defensive solidity holding out a Drumkeerin team who played with tremendous passion but couldn’t regularly find a way to really trouble the Glenfarne defence.

Top man was an inspired Fergal Clancy - five points for the former county man was a nice return but it was his leadership that really stood out as he was involved in everything good that his team did.

Drumkeerin must have thought they had the game in the bag when they led by two with time almost up and they even had an injury time glimpse of a goal that could have given them a place in the semi-finals.

But the men in maroon never kept up a constant pace, doing most of their scoring into two bursts, four points in six first half minutes and 1-4 in 13 minutes during the half. It wasn’t enough to sustain their challenge but you couldn’t fault the effort of the likes of Cathal McCauley, Aidan Dolan, Jason Byrne and Jamie Langan.

Glenfarne/Kilty now face a potent Glencar/Manor second string in the semi-finals but if they display the spirit they showed last Sunday, they may finally reach the final in their third consecutive intermediate semi-final.