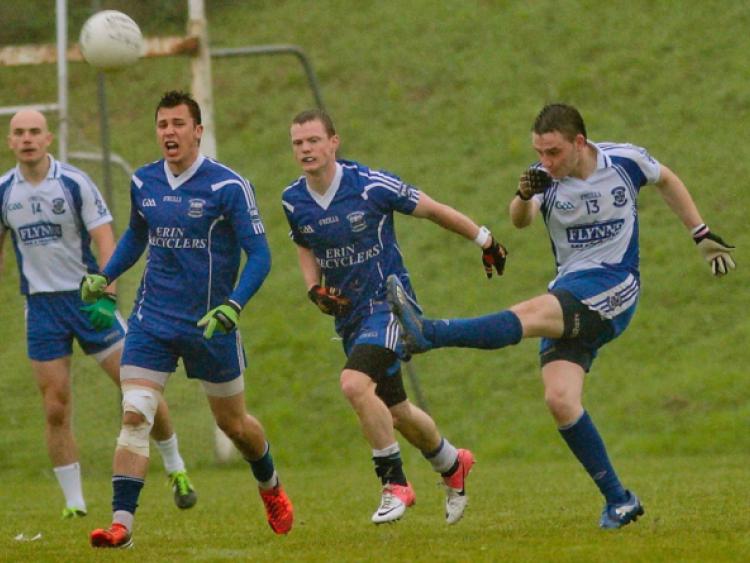 An absorbing quarter-final between two evenly matched sides finished level and there will be no complaints from neutrals about the prospect of a replay.

An absorbing quarter-final between two evenly matched sides finished level and there will be no complaints from neutrals about the prospect of a replay.

With time almost up and his side trailing by a point Melvin Gaels’ Paul Brennan exchanged passes with his brother Brendan before arrowing his shot between the uprights from over 45 metres.

A missed penalty, some excellent scores, bad misses and some brief confusion over the lack of hawk-eye facilities in Drumshanbo added to what was an enthralling evening even if the persistent rain meant the standard of football wasn’t always as high as it may otherwise have been.

With the game barely four minutes old, St Mary’s had a sight of the Melvin Gaels goal after a searching ball over the top. While not the easiest of the chances, Robbie Lowe will have been disappointed to see his shot narrowly flash past the top corner of the goal.

Having taken the lead for the first time when the instrumental David McSharry pointed, Melvin Gaels were dealt a blow when referee Frank Niblock awarded St Mary’s a penalty.

Alan Doherty’s free was dropped by goalkeeper James McGowan and attempting to regain possession McGowan succeeded only in fouling James Glancy. Unfortunately for St Mary’s Brian O’Donnell didn’t make a clean contact with the resulting penalty which struck the upright before being cleared.

After Peter McGowan and Jimmy Guckian exchanged points St Mary’s were made to rue the penalty miss further as Melvin Gaels pounced for what would prove to be the game’s only goal.

Stephen McGurrin released Liam Ryan and after capitalising on a slip by a St Mary’s defender Ryan pounced from close range.

The lead was extended to five points when Peter McGowan converted a free but St Mary’s showed great resilience to come roaring back. Five unanswered points in the final 10 minutes of the half from James Glancy, Alan Doherty, Michael McWeeney, Jimmy Guckian and Brian O’Donnell meant there was nothing to separate the sides at the interval.

St Mary’s continued that form at the start of the second half with further points from James Glancy and Alan Doherty giving the Carrick men control of the tie.

It was clear however that Melvin Gaels were not prepared to relinquish their title without a fight and it was no surprise that they came back into contention.

With a quarter of the game remaining and the result still in the balance St Mary’s retook the lead when Alan Doherty converted a free.

Once again Melvin Gaels came roaring back and were on level terms again when Conor Sheridan scored an excellent point from distance and they thought they had taken the lead moments later.

David McSharry’s effort was too close to call for many but after a meeting with his umpires the referee deemed the effort was just wide.

With four minutes remaining St Mary’s edged back in front following another Alan Doherty free but there was still time for even more drama.

Having seen two frees, from very scorable positions, fly wide, Melvin Gaels appeared to be running out of time but Paul Brennan had other ideas.

After he was fouled, he took the free quickly to his brother BB and when he got the ball back Paul struck an excellent shot to level matters.

Let’s hope the replay proves to be as exciting.