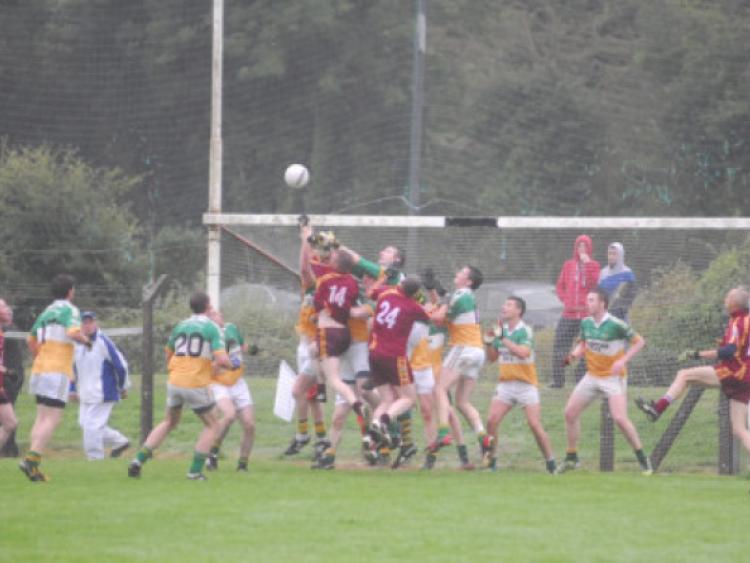 A Quarter-Final bedevilled by rain and treacherous conditions was basically decided by the key contribution of Cathal McCrann last Saturday.

A Quarter-Final bedevilled by rain and treacherous conditions was basically decided by the key contribution of Cathal McCrann last Saturday.

Last Saturday’s Connacht Gold Senior Championship quarter-final in Cloone was an extremely difficult assignment for both teams, coping with treacherous conditions and a slippery surface that betrayed players time and time again at the most inopportune moments.

In such conditions when skills became something of a lottery, it took the steady hand of Cathal McCrann to guide last year’s Intermediate Champions to this year’s semi-finals.

McCrann scored five points in a game decided by two, a game where Annaduff could only manage five points themselves as the driving rain made it extremely difficult for either team to make any headway on the night.

McCrann’s scores weren’t just from placed balls, three lovely efforts from play brightened up a tough battle where both teams fought tooth and nail for every ball.

As much as McCrann was the instrument of Gortletteragh’s victory, the foundation was built on their physical strength, a factor that Annaduff couldn’t match in the tough conditions.

Annaduff, true to their competitive nature, swarmed around every man in possession, fought like tigers for everything that came their way but this young, and somewhat light, team couldn’t cope with the physical power Gortletteragh could generate.

Annaduff too were lucky that Gortletteragh’s shooting boots were not on as they kicked seven wides in the first half alone to just two for Annaduff and they wasted a lot of possession as they constantly won the midfield battle.

Indeed, Gortletteragh might have won the game a good deal more comfortably had Cathal Quinn’s goal early in the second half been allowed to stand but on first viewing, one would think that referee Ray McBrien got it right as the Gortletteragh man collided with Annaduff keeper Barry Daly.

As they had done in their most recent matches, Annaduff started badly as they struggled to get into the game and find their rhythm but once they did, they made life much more difficult for Gortletteragh.

A young Annaduff team may develop into a force in the years to come - they certainly have a lot of young talent and under Michael Moyles, who took over midway through the year, they were rejuvenated and showed a potential that may blossom in time.

But their younger players will gain valuable experience from their efforts this year and could yet be a force to be reckoned with, their young talent still very much married to the ideals that typify Annaduff’s style of play.

McCrann was the key figure for Gortletteragh but Ciaran Egan was equally influential around the middle of the park while they also had strong displays from Padraig Gallagher, John Reynolds, Nigel Keighran and Kevin McGrath.

For Annaduff, Brendan Guckian, Jimmy & Matty Cox were impressive throughout while Sean McNabola gave tantalising glimpses of his potential during the second half with two wonderful second half points but Annaduff will still worry about how they will replace the likes of Ray Cox or David Duignan who are still so key to their team.

Gortletteragh now face their neighbours Mohill in the semi-finals and it is a game that both teams will feel they have a good chance of winning. A young, light Mohill team may have the same problems that Annaduff had in coping with the physical power Gortletteragh can produce but Gortletteragh also know that they will have to show a better return on their shooting.