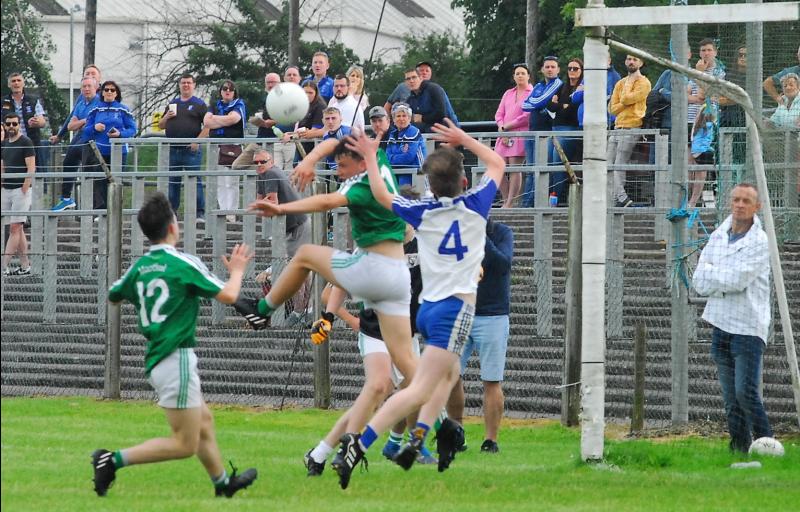 While the final scoreline might not actually reflect the nature of Sunday's Newtowngore Engineering U17 League Division 1 Final, it nevertheless does convey the power and strength in depth of an impressive St Mary's Kiltoghert who saw off a battling Mohill to claim the title.

The scoreline is more than a little tough on Mohill who contributed enormously to a contest that was well in the balance midway through the second half, right up until the moment Daniel Martin fired a rocket to the Mohill net. That score broke Mohill's resistance as the Carrick men landed a further 2-5 before the final whistle, their strength in depth proving crucial down the final stretch as Mohill ran out of steam.

It wasn't for the want of effort - Matthew Murphy, Colin McNamara and Jack Rowley led a Mohill team who you felt gave everything they had and played with a desire that the Carrick side struggled to match at times.

There was no doubting the talent in the St Mary's ranks but early on, it was Darragh Gardiner, Alan Beirne and Aaron Glancy catching the eye while they needed to bring on Gerard Murtagh, who had lined out with Connacht rugby the day before, to shore up their defence in the first half.

But with Ben Guckian the driving force from the middle of the park, displaying an array of skills most senior players would struggle to match, St Mary's were always a threat with Brian Keaney, Josh Maye and Daniel Martin a danger while the excellent Dean Earley linked up play with quiet  efficiency.

St Mary’s had the better of the start with Matthew Murphy’s third minute point the only score in response to points from Cian Reynolds, Daniel Martin & Darragh Gardiner. St Mary’s looked to be taking complete control when Brian Keaney made a superb catch near the goal, performed an outrageous sidestep and blasted the ball to the net on seven minutes.

Oscar Reynolds fired over after good work from Michael Tiernan before Ben Guckian burst through to score on 12 minutes. But Mohill were pressurising St Mary’s as Jack Rowley scored an excellent point, although that was matched by a good Josh Maye point from distance.

Mohill got themselves back into the game when Matthew Murphy’s blistering run was ended illegally, the full-forward dispatching the penalty himself to cut the gap back to two points although a Ben Guckian free opened up a three point gap.

Jack Rowley showed good footwork to fire over five minutes before the break and that was how it remained at halftime with St Mary’s 1-6 to 1-4 ahead of a dogged Mohill. Straight from the throw-in, Ben Guckian surged forward to point and St Mary’s made their rapid start count when Josh Maye fired the ball to the Mohill net despite a desperate attempt by a defender to keep the ball out.

If you thought that the game was over, nobody told Mohill as Matthew Murphy fired over a free, matched by a good Dean Earley scored. But Mohill kept coming and caused St Mary’s defence huge problems with Colin McNamara firing over three frees in a four minute spell to cut the gap back to a goal once more.

However, just as they were threatening, St Mary’s closed the door with a vengeance as Josh Maye put over a free before a superb crossfield pass from Guckian found Daniel Martin in space and he unleashed a rocket of a shot to the Mohill net on 47 minutes.

Guckian and Keaney added points for Mary’s with Rowley replying for Mohill but another Guckian run from midfield saw him pop the ball over the defender to Josh Maye who produced a deft finish for a lovely goal.

Maye added another point before Matthew Murphy took off on a surging run, twice playing one-twos with teammates before firing a rocket to the St Mary’s net.

However, St Mary’s would have the final word as Guckian from distance and Dean Earley both fired over points while sub Gordon Fitzpatrick finished from close range after Earley’s shot was well saved by Luke Bohan. Mohill did have one last goal chance when Murphy’s lob came off the woodwork and Evan Kilrane shot into the side netting but it was St Mary’s day.