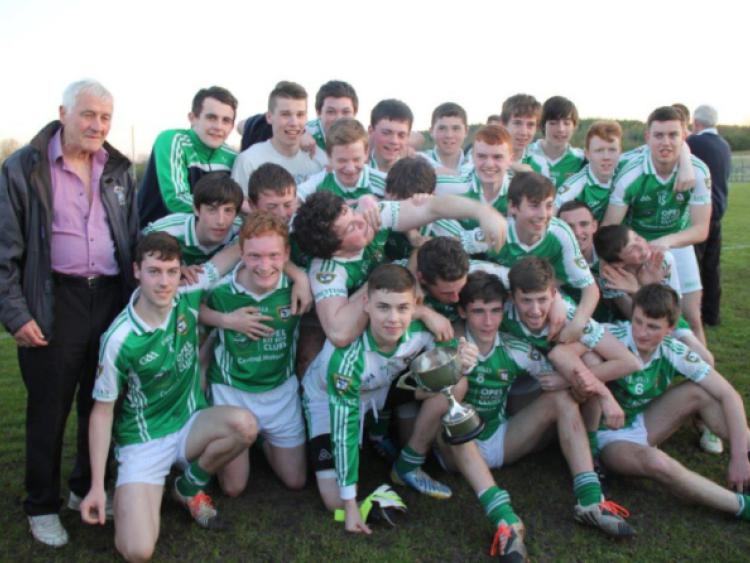 St Manchan’s clinched the Minor League 15-a-side title after a titanic battle with Ballinamore at sunny Fenagh. This was a historic achievement as they have now won the Minor League five years in a row.

St Manchan’s clinched the Minor League 15-a-side title after a titanic battle with Ballinamore at sunny Fenagh. This was a historic achievement as they have now won the Minor League five years in a row.

Manchan’s dominated the game for the first half and should have been out of sight at half time. The off the ball running of their forward line allied to total dominance in the middle third of the field by Keith Beirne, Eoghan Keegan, Jamie Stenson and young wing-back Sean Harkin meant they attacked at will.

However some great defending by Ballinamore and over playing by St Manchan’s meant that at half time Manchan’s were only five points up. Manchan’s had been awarded a penalty when Ronan Gordon was bundled to the ground. Keith Beirne sending the spot kick to the net.

Within two minutes of the restart Ballinamore had reduced the deficit to one point, a Donal Feely point was quickly followed by a superb Niall McGovern goal. Suddenly this was game on.

Thirteen minutes into the second half Manchan’s introduced substitute Ryan Murphy. He chased a Ballinamore player down the sideline and both players clashed and fell and in the eyes of referee Frank Niblock, Ryan Murphy hand tripped his opponent. So 40 seconds after joining the action he was sent off on a black card, replaced by Dylan Gaffey.

Ballinamore then went into a four point lead when Peter Reynolds hit the net from the 20 metre line. It was all Ballinamore at this stage with Kevin Mullen giving a display of point kicking from full forward as he scored eight points.

Manchan’s, to their credit, never let their heads drop with Sean Harkin a constant threat to Ballinamore as he soloed right into the heart of the Ballinamore defence a number of times.

Ronan Gordon and Keith Beirne scored a goal each to give Manchans the title by two points, Beirne top scoring with 2-7.