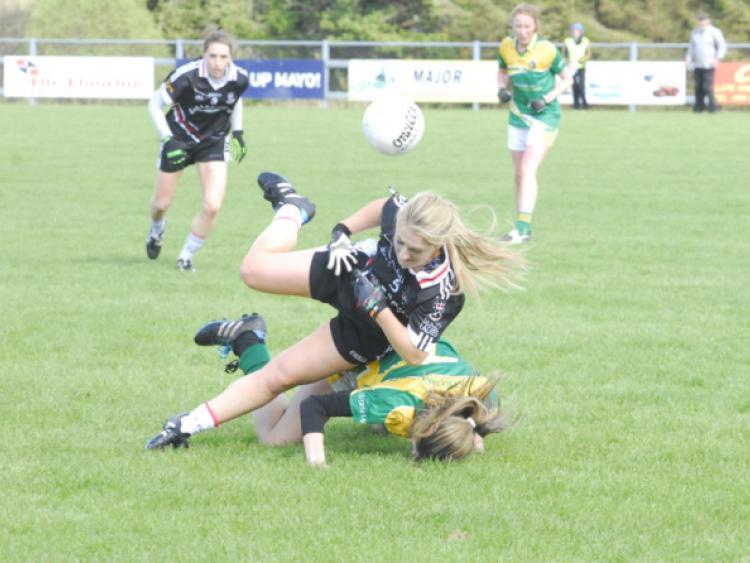 The long wait for the Leitrim Ladies to secure promotion from Division 3 will have to wait for another year as they bowed out of this year’s competition at the semi-final stage on Sunday afternoon last in Ballyhaunis.

The long wait for the Leitrim Ladies to secure promotion from Division 3 will have to wait for another year as they bowed out of this year’s competition at the semi-final stage on Sunday afternoon last in Ballyhaunis.

Two second half penalties, both dispatched by Emma Hansberry were all that separated the sides at the full-time whistle but over the course of the game it was Sligo who deserved to clinch a place against Waterford in the league final.

Leitrim acquitted themselves well in the opening half when playing against the wind and actually led at the interval but they failed to build on that bright opening 30 minutes.

The lengthy period of injury time at the end of the game gave Leitrim hope that a comeback may be possible but the manner in which Sligo maintained possession during the closing stages ensured that didn’t happen.

Sligo’s convincing finish was similar to how they began the game as they took the game to their opponents, dominating the opening 10 minutes against a Leitrim team who were slow out of the blocks.

Straight from the throw-in, the black and white jerseys attacked and caused panic in the Leitrim defence. Two early wides were quickly forgotten when Bernice Byrne opened the scoring with a fourth minute point after good approach play involving team captain Stephanie O’Reilly and Elaine O’Reilly.

The lead was doubled when referee Yvonne Duffy over ruled one of her umpires as she adjudged Katie Walsh’s effort to have gone through the posts, even though it was initially waved wide.

Sligo’s good start became got even better when Walsh converted two frees as Sligo opened up a four point lead after just 10 minutes while Leitrim had struggled to get the ball out of their own half, never mind launch an attack of note.

However, the incredibly strong breeze that Leitrim were struggling to content with suddenly eased off considerably and all of a sudden Leitrim were afforded an opportunity to show their threat as an attacking force.

The game was 12 minutes old before Leitrim registered their first point of the game but there were plenty of positives that the Leitrim management could take from the score.

Now operating in a deeper position, Niamh Tighe did well to win possession and she began a move that saw Anna Conlon, Emma Guckian and Aine Tighe all play their part before Deirdre Ward struck for Leitrim’s opening point.

Moments later they almost had a second score but on this occasion Ward was just off target as she carved her way through the Sligo defence, with help from Lorraine Brennan and Aine Tighe.

Although Sligo re-established their four point lead when Katie Walsh converted another free, the signs were much more encouraging from a Leitrim point of view.

Leitrim struck for their second point of the game with Aine Tighe on target from distance as they began to take the game to their opponents.

Moments later she came close to further reducing the deficit but was unlucky to see her effort come back off the post.

That miss certainly didn’t effect her confidence and moments later she made amends with a free that sailed between the Sligo uprights.

At this stage of the game Leitrim appeared to be in control. They were strong in the tackle, while there always seemed to be a player in close support for whoever was in possession.

Leitrim punished Sligo for successive wides when they pounced for the game’s opening goal with just four minutes of the half remaining. Once again wing back Aine Heslin found herself in an advanced position and had the confidence to attempt a shot. However, on this occasion luck was on her side as the ball dipped under the Sligo crossbar to give Leitrim a lead which had seemed highly unlikely after 10 minutes.

There was to be one further point for each side with Elaine O’Reilly on target for Sligo and Emma Guckian completing a move began by corner back Claire Beirne to ensure Leitrim held a slender one point lead at the interval.

Leitrim began the second half in style with Aine Tighe on target just seconds after the restart before that was cancelled out by a Katie Walsh free.

Half-time substitute Emma Hansberry was more alert than anyone else when she read the Leitrim intentions as they attempted to restart with a quick free. Having intercepted the ball Hansbery was left with a clear route to goal and with just goalkeeper Michelle Guckian to beat.

Before the Sligo forward could get a shot at goal, she was adjudged to have been fouled by the goalkeeper and from the resulting penalty Hansberry goaled to regain the lead for Sligo, a lead they would not let slip.

Leitrim replied with an Aileen Maguire point but after an injury to Sligo captain Stephanie O’Reilly and the lengthy delay that followed Leitrim seemed to lose any momentum they had gathered and it was Sligo who now looked stronger all over the pitch when the game resumed.

O’Reilly, showing no signs of the injury pointed to put two points between the sides and with 12 minutes remaining Sligo were awarded a second penalty when Guckian was adjudged to have fouled Katie Walsh as she bore down on goal. This time there could be little complaint and Aileen Maguire readied herself to take on the role of goalkeeper before the inevitable yellow card was issued to Guckian.

Hansberry again took responsibility for the penalty and the result was the same as she powered her shot past Maguire to give Sligo a commanding five point lead.

Leitrim attempted to get back in contention but even though there were nearly 10 minutes of injury time points from Aine Tighe (free) and Aine Heslin score only served to put a closer look on the scoreboard and the scoring for the day was completed by Sligo’s Louise Brett deep in injury time.