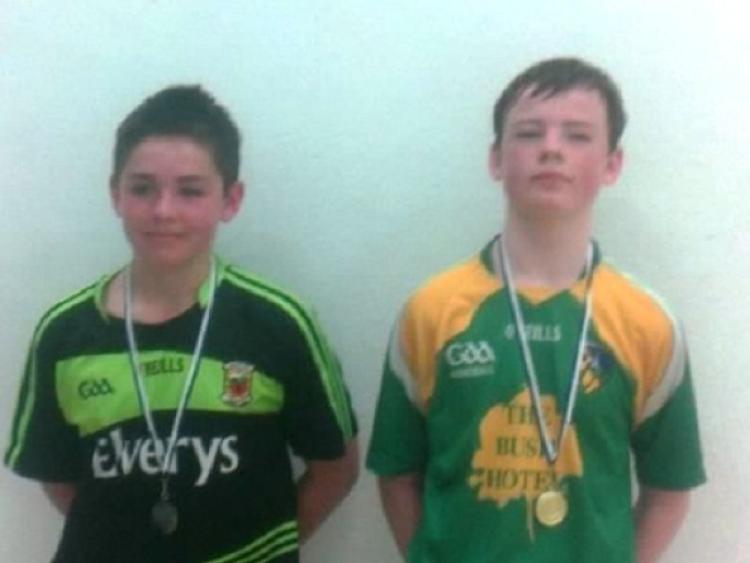 In the U13 Singles Final, Eoin McLoughlin took the title defeating Sean Dunleavy (Mayo) on 10-15, 15-10, 15-9. After a sluggish start to the first game, at one point trailing by 10 aces, McLoughlin fought his way back into in, losing by five aces. In a must win second game, he played some of his best handball winning on a score of 15-10 to force a tie break. In the third game with some great serving and kill shots, he eased out a victory to take the game and U13 title.

Fergal McLoughlin and James Wrynn took on Galway’s Rurai O’Curraoin and Conor O’Gamhnain in the U13 Doubles Final winning 15-14, 15-14. As the score suggests both games were very tight, with the two sides on game ball in both games.

Both sides played top quality handball and both games could have gone either way, but the Leitrim lads showed the greater composure. Having taken the first game, the confidence that the Fenagh lads gained stood to them, and when they found themselves in the same position in the second game, they were able to kill off the Galway challenge, to take the U13 Doubles title.

The Drumshanbo U14 pairing of Gareth Gilmartin & Fergal Moran were defeated by Galway’s Kaylem Grealish and Tommy Kilduff in the U14 Doubles Final, while Fenagh’s James Lennon and Caolan McDermott were defeated by Sligo’s Diarmuid and Vincent Harte in the U15 Doubles Semi-Final.