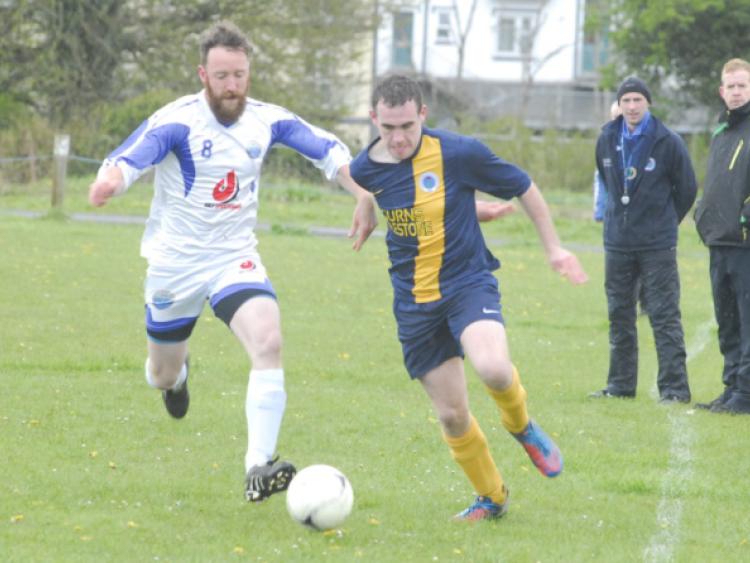 Manor Rangers secured their place in the semi-final of the inaugural Yeats Cup with a hard fought win over Leitrim rivals Carrick Town in The Showgrounds on Sunday morning last.

Manor Rangers secured their place in the semi-final of the inaugural Yeats Cup with a hard fought win over Leitrim rivals Carrick Town in The Showgrounds on Sunday morning last.

While there was no doubting the result upon the sounding of the full-time whistle, the game was much closer than may have been expected given the contrasting fortunes both sides have experienced during the course of the Super League.

Manor Rangers began brightly with Paul Boylan and Colm Callinan looking particularly lively during the opening exchanges while Carrick Town, who conceded 10 goals a week earlier when they met Boyle Celtic, looked to settle into the game.

The breakthrough goal came in the 15th minute and it was no more than Manor Rangers deserved for their early pressure.

Manor were awarded a corner after goalkeeper Adrian Armitage did well to save a free that was rolled to Adrian Croal by Hassan Aajip but from the resulting corner the deadlock was broken.

Paul Boylan’s delivery wasn’t dealt with by the home defence and Colm Callinan was on hand to force the ball home from close range.

After the goal, Callinan continued to be Manor’s most threatening player as he was fouled on the edge of the Carrick box after a mazy dribble four minutes after his goal.

Although Paul Boylan’s free kick went harmlessly over the bar, Manor continued to press forward and Callinan had another sight of goal but his 23rd minute shot from the edge of the box was saved by Armitage.

Boylan saw a header flash wide of the goal and he almost turned provider when his close control saw him beat three defenders in the box but when he squared the ball, there was nobody on hand able to get a clean strike on goal.

Having enjoyed such superiority during the opening 30 minutes, Manor were almost undone with Carrick’s first real sight of goal when Fergal Daly rose unopposed to meet a well delivered corner but his header failed to trouble Colin Gilligan.

That chance should have served as a warning for Manor Rangers but Carrick Town again came close when Shane Fitzpatrick shot from the edge of the box after Conor Shanley’s clever run but Alan Harvey was on hand to clear the ball off the Manor Rangers line.

There was to be one final chance during the opening half when Manor Rangers’ Colm Callinan struck from the edge of the box.

Although his shot was saved by Adrian Armitage, Paul Boylan was first to react to the breaking ball but his delicate header came back off the Carrick post. Hassan Aajip had a chance to convert the rebound but, off balance, his shot went harmlessly over the home team’s bar.

The second half proved to be a scrappier affair with Manor determined to get back to winning ways after some frustrating results in the league while Carrick were playing with the hope of putting the misery of their league campaign out of their minds.

As a result, chances became fewer and although Manor Rangers had looked the more dangerous throughout the opening half, the fact that there was just a solitary goal separating the sides meant the contest remained in the balance.

Paul Boylan was the first to have a sight of goal in the second half but his effort from just outside the box narrowly missed the top corner of the Carrick goal.

Seamus Ryder was introduced for the injured Alan Hickey and the powerful Manor Rangers forward had a host of half chances during the 30 minutes he was on the pitch.

The first of those, a shot lacking power, deceived Armitage and almost found its way to the Carrick goal but didn’t have enough to power to reach the goal line and moments later he dragged a shot wide when he feel he should have done better.

With time running out, Carrick had to commit numbers to attack and with player manager Neil Commerton now on the pitch, they had the know-how to cause concern for the Manor defence.

However, the equaliser wasn’t to materialise and it was Manor Rangers who struck next to take a big step towards securing their place in the next round with 12 minutes remaining when Alan Harvey’s trusted left boot struck a free kick from the edge of the box which curled over the Carrick wall and beyond Armitage.

Seamus Ryder went close to making sure of victory before he put the gloss on the win with a close range finish in injury time.