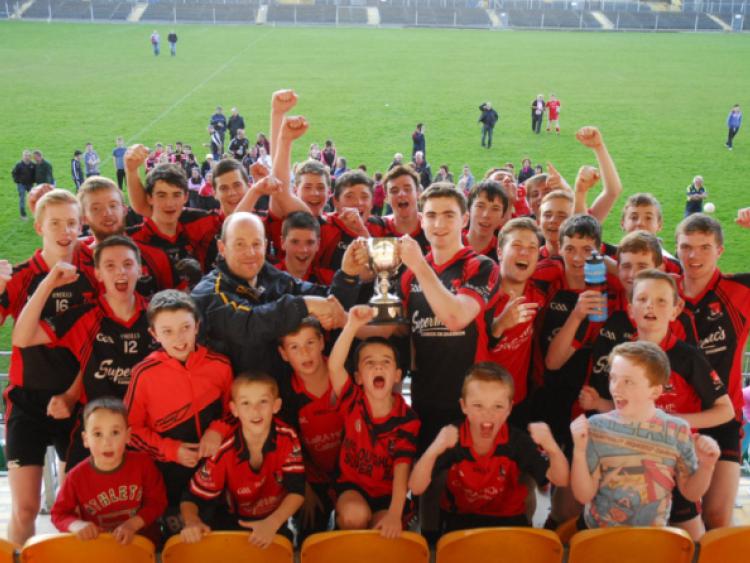 Fenagh St. Caillin’s may have gone into the game as hot favourites but their eight point victory hides the story of an incredible game that left everyone highly entertained.

Fenagh St. Caillin’s may have gone into the game as hot favourites but their eight point victory hides the story of an incredible game that left everyone highly entertained.

Both teams scored nine times during the first half but unfortunately for Dromahair who probably edged the half, three of the Fenagh scores were goals, one an outstanding individual effort from Tony Simms who ran half the field to drive a piledriver to the net.

Ten minutes into the second half, Fenagh looked to won the game with 2-2 in the space of two minutes from cousins Ryan & Riordan O’Rourke but although they trailed by five goals, Dromahair hit back with four goals of their own in under ten minutes.

It was an enthralling game and a great spectacle and although you have to say Fenagh might not have been at their absolute best, it was a cracking contest.

Both sides swapped early points through Riordan O’Rourke and Robbie Cunningham but Fenagh keeper Kyle McNabola made a good save to deny Mark Kavanagh. However, the breakthrough came on five minutes when Tony Simms went on an astonishing run from his own 50 yard line and buried a 20 yard shot to the Dromahair net.

Dromahair responded in style with points from Darragh McMorrow and Cunningham (2) but they were rocked when Jarlath Scollan played a one-two with O’Rourke before driving a low ball to the net on 11 minutes.

Jack Gilheaney and Aaron McLoughlin were on target for Fenagh while Martin Feeney & James Clancy pointed for Dromahair but the incident that stood out was an outrageous dummy from McMorrow who left two Fenagh defenders running into each other.

The game was still tit-for-tat with Cunningham (2) and Clancy swapping points with Scollan, Ryan O’Rourke and Alan Doonan but the game turned in added time when Riordan O’Rourke was fouled on his way through.

Ryan O’Rourke drilled the penalty to the net to leave Fenagh 3-6 to 0-9 ahead at the break. Fenagh started the second half like trains with points from Riordan O’Rourke and Conor Reynolds, Martin Feeney pulling back a point.

The damage for Dromahair was done in a two minute spell that saw Riordan and Ryan O’Rourke both scored 1-1.

That looked to have killed the game and although Dromahair pulled back a goal from a Cunningham penalty, it seemed no more than a consolation but the young Dromahair men refused to lie down.

Martin Feeney went on an incredible spree with three goals in six minutes, the first after a block on a Mark McGee shot. Conor Reynolds and Riordan O’Rourke had points but Feeney drove two great finishes to the net in the space of a minute and suddenly there was just five points in it.

Fenagh looked in danger but a Ryan O’Rourke point steadied the ship and they finished with good points from Conor Reynolds and Jack Gilheaney to complete an eight point victory.