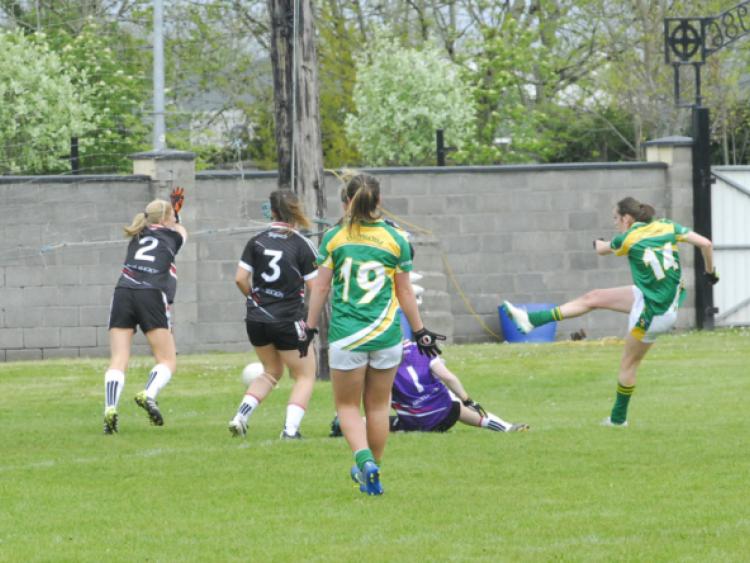 Goals win games and they certainly did last Sunday in Dromod as a wasteful Leitrim were punished by a clinical Sligo.

Goals win games and they certainly did last Sunday in Dromod as a wasteful Leitrim were punished by a clinical Sligo.

The ongoing rivalry between these two teams ensured that this was no tame affair as both sides played at fantastic pace and with utmost commitment. But when it came down it, Sligo’s ability to make their chances count won the day.

With a strong breeze blowing up the field in Dromod, Leitrim started like trains but a succession of wides, nearly all from excellent positions, stopped Leitrim from getting the reward that their play deserved.

Five wides and dropped shots in a five minute spell killed Leitrim’s momentum as they dominated the breaking ball and stopping Sligo’s pacy attack, restricting them to just two points.

But with just two minutes left in the first half, another poor Leitrim shot was punished to the highest degree as Sligo brilliantly worked the ball down the field for Katie Walsh to drive the ball past Michelle Guckian for a crucial goal.

It was a score that undid all of Leitrim’s good work and despite two points from Carla Le Guen and Aine Tighe, Sligo must have gone into the halftime break extremely confident as they would have the strong wind behind them.

And punish Leitrim they did as the introduction of Emma Hansberry added huge pace to their attack, Sligo pouncing for three second half goals on the break as the Yeats women sat deep and struck on the break.

That tactic was deployed perhaps with Aine Tighe in mind as despite playing with the wind, the Sligo women ensured that all avenues to the Kiltubrid sharpshooter, who grew increasingly frustrated as the game progressed, were clogged up.

Tighe escaped the clutches of her marker just once and landed a goal but for most of the game, Tighe was well bottled up by a disciplined Sligo defence.

Leitrim must now pick themselves for a clash with the losers of the Sligo and Roscommon semi-final but on this showing, all it will take is an improved accuracy to make them a real force at this level.

They will be anxious to have a fully fit Mairead Stenson who had to go off with a badly injured shoulder late in the game as the Eslin woman did a good job on the dangerous Katie Walsh and could be faulted for the goals.

Claire Beirne, Lorraine Brennan and Roisin McHugh did well in defence while Anna Conlan and Sarah McLoughlin ran themselves to a stand-still in the middle of the park.

Upfront, Aine Tighe was too often the target for a slightly predictable Leitrim attack but Carla Le Guen and Aileen Maguire did show up well with some good scores. The task for Leitrim is to free Tighe and get a greater contribution from other sectors for the rest of the campaign.

The game started with Leitrim very much on the front foot, Deirdre Ward scoring a good point on the run after just 20 seconds and Aileen Maguire firing over after a Carle Le Guen pass. However, Sligo gave note of their goal threat as Katie Walsh hit the post and Stephanie O’Reilly saw a chance go just wide.

Good work from Anna Conlan set up fellow midfielder Sarah McLoughlin for a point on 11 minutes before Sligo opened their account with a well worked Sarah Reynolds point.

However, Leitrim then wasted five good scoring chances, Tighe wide from play and short from a free, Emma Guckian shooting short and Aileen Maguire missing two chances before McLoughlin set up Aine Tighe for an excellent point on 18 minutes.

Karen Maloney and Aine Tighe (free) swapped chances and Leitrim were ruing more missed chances when a poor Leitrim shot was worked down the field, Katie Walsh breaking through a tackle to drill a great shot to the Leitrim net on 27 minutes.

A frustrated Leitrim hit back with points from Le Guen and Tighe (free) to leave the halftime score at 0-7 to 1-2 for Leitrim but Sligo cut the gap to one when Sarah Reynolds finished off a run from sub Emma Hansberry with a fine point.

Five minutes into the second half and Sligo took control when another blistering Hansberry run exposed the Leitrim defence and Walsh was left with an easy tap in, the Sligo full-forward immediately adding a free.

Leitrim sub Ailbhe Clancy scored a wonderful point from the left corner but a point from Hansberry was followed by a blistering Hansberry goal as she soloed in from 40 yards out to bury the shot to the net.

Leitrim hit back in the best possible fashion when Aine Tighe finally got a bit of space, bounced off the keeper and then drilled the ball to the Sligo net.

Le Guen fired over a good point with 19 minutes gone, three minutes after Sligo’s Deirdre McGrath was yellow carded, to cut the gap to a point but Sligo replied in devastating fashion as another powerful Hansberry run set-up Stephanie O’Reilly for an excellently taken goal.

The goal came with double punishment as Mairead Stenson was injured in a collsiion afterwards.

Aine Tighe pulled back a free but Leitrim’s challenge was broke and Hansberry added two points before Aileen Maguire pointed. Keeper Michelle Guckian saved from Hansberry to prevent a fifth but Elaine O’Reilly got the last score of the game.