The Dromahair FC team who were defeated by Glenview

Leitrim teams had a tough start to the Sligo Leitrim Soccer Leagues at the weekend with Manorhamilton Rangers, Carrick Town and Dromahair all suffering losses in their opening games.

A severely understrength Manorhamilton Rangers had the misfortune to come up against in-form defending champions Carbury in McSharry Park with the Sligo town team cruising to a 9-0 defeat, with Jason Lyons hitting four and Gareth Kelly a hat-trick on a tough day for Leitrim’s highest ranked team.

Minus a lot of players, there was one stand out feature for Manorhamilton with father and son Helder Oliveira and Marcio Rafael lining out for the Sligo Southern Hotel Super League side in their first outing under new manager Dave Cummins.

In the Sligo Pallets Premier Division, Dromahair came the closest to a win for the Leitrim teams with Leon Harte giving the visitors to Forthill the lead after 25 minutes. Ronan O’Grady equalised just before halftime

Glenview took the lead just after halftime through Tom Myers and despite some great chances, Dromahair were unable to force a draw.

Carrick Town fell to a 3-0 at home at the hands of Gurteen Celtic with Luke Devaney giving the visitors an early lead. Carrick Town competed well against the Gurteen men but two late goals for Ross Donovan and Billy Flynn secured the win for the visitors. 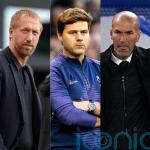 The contenders in the running to become the next Chelsea boss

Next Sunday, Manorhamilton Rangers host Calry Bohs in the Super League while Dromahair make the short journey to Geevagh to take on Valley Rovers in the Sligo Pallets Premier League. Carrick Town are in action on Saturday night in Strandhill where they will be hoping to pick up their first win of the season when they take on Strand Celtic Reserves.

This week  sees the start of the U18 boys & girls leagues with Dromahair boys and girls in action while there will be a Leitrim derby in the Rugantinos Rockwood Parade U18 Boys in Mac Sharry Park on Wednesday, September 14, with Manorhamilton Rangers taking on Carrick Town at 7pm.

The Republic of Ireland North West Soccer Supporters Club are organising a bus for Ireland’s game against Armenia in the Aviva Stadium on Tuesday September 27. The bus leaves Sligo at 2pm and on to Colloney for 2.30pm and Carrick on Shannon for Stop/Collection at the Landmark Hotel for 3pm. This is a Nations league match which Ireland lost to Armenia last June 1-0.

The Club have a Committee formed made up of people from Sligo and Leitrim. Chairperson is Alan Dunbar, Treasurer is Eamon Breslin, Secretary is Mark Cawley, PRO Padraic Kennedy. Committee members Eugene Gilgunn. Contact for the bus can be made to any of the above or Club members or the club’s facebook account.