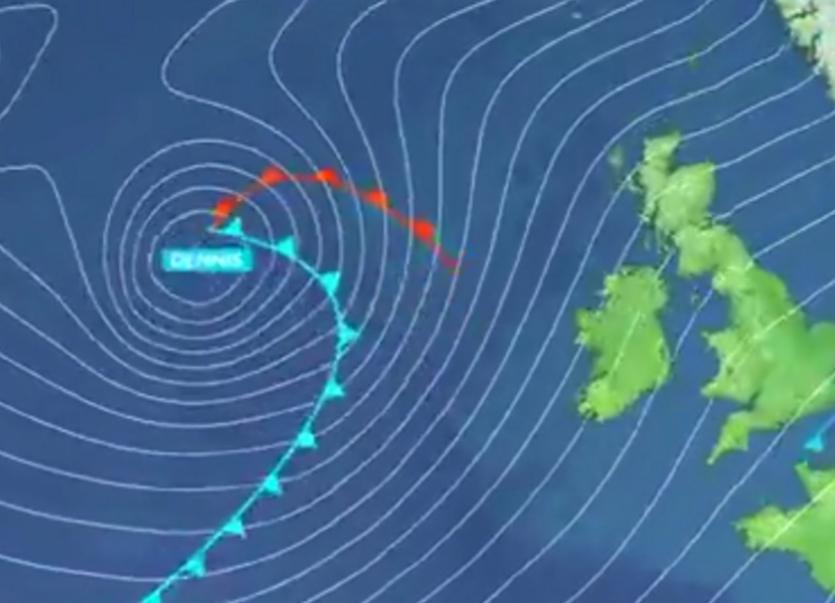 Storm Dennis, officially named by the UK Met Office on Tuesday, is the deepest Atlantic storm on record but will weaken somewhat as it tracks towards Ireland this weekend.

That's according to Irish Weather Channel forecaster Cathal Nolan who is expecting Storm Dennis to impact the country through Saturday and Sunday.

"It will bring a risk of damaging winds along the west coast, as well as heavy rain and monstrous sea swells that are likely to cause some significant damage in coastal communities," Cathal explained.

"At its peak around 400 km to the northwest of Ireland, Dennis will see its central pressure drop to between 913 - 915 hPa, which would tie as being the deepest pressure reading ever recorded in the North Atlantic Ocean, not from a Hurricane. Such a pressure reading is truly phenomenal," he added.

"The sea swell generated by Storm Dennis is expected to be truly phenomenal and is likely to be larger than that generated by Storm Ciara. Current indications suggest sea swells and wave heights both reaching in excess of 15 metres or some 50 feet between Sunday and Monday. Significant coastal flooding is possible with damage to coastlines also likely.

"Heavy rain associated with Storm Dennis will affect many parts of the country over the course of the weekend with rainfall totals in some areas exceeding 40 mm once again for the weekend period, leading to a renewed risk of flooding in areas which experienced significant flooding from Storm Ciara," he concluded.

Met Éireann is also forecasting significantly unsettled weather from Storm Dennis. They said: "There will be a very wet and very windy start to Saturday in association with Storm Dennis. Rain in all areas during the morning, heaviest in the west, clearing to blustery showers during the afternoon.

"Strong and gusty southerly winds veering southwesterly with gales on coasts. Another band of heavy rain crosses the country on Saturday night with southwesterly winds remaining strong to gale force. Lows of 2 to 5 degrees.

They predict a wet and windy start to Sunday, with rain giving way to blustery, heavy showers during the afternoon. Showers will turn wintry over high ground. Very windy again on Sunday, strongest in the west with southwesterly gales or strong gales on coasts.