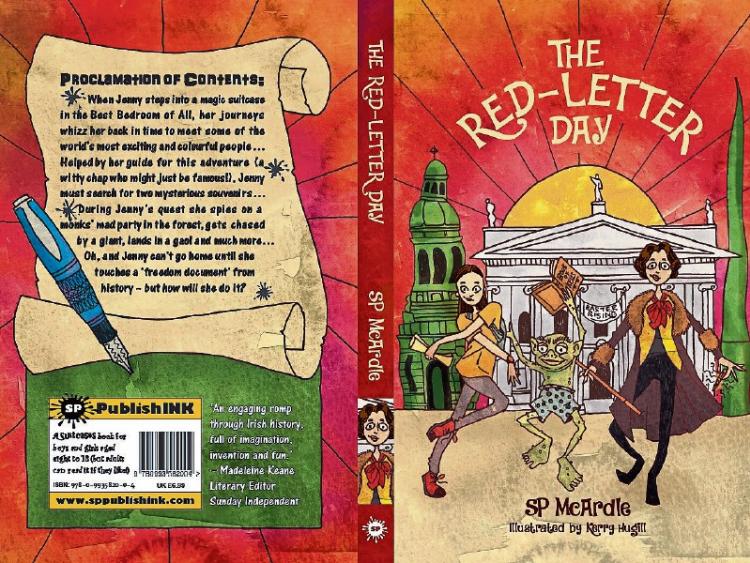 The new magic adventure book with a 1916 finale by a former Leitrim Observer reporter is already rising speedily up the ranks in terms of praise.

'The Red-Letter Day', by SP McArdle – who previously worked as a reporter at the Leitrim Observer - is a fun-filled romp from ninth-century Book of Kells times to the GPO ‘steps’ on Easter Monday in 1916.

When Jenny steps into a magic suitcase in the Best Bedroom of All at her aunt’s farmhouse, she is whizzed back in time to meet some of the world’s most exciting and colourful people.

Each suitcase's adventure features a quirky guide to help (or hinder!) Jenny, and in The Red-Letter Day he’s a witty chap called O’Flahertie – who might just be famous…

Adventuress Jenny must search for two mysterious souvenirs, a parchment and pen, but hasn’t a clue how to find them. If she can, her passport home is to touch a ‘freedom document’ from history – but how will she do that?

During Jenny’s quest across the centuries she spies on a monks’ mad party in the forest, gets chased by a giant, lands in a gaol and much more.

This hilarious historic romp through time and imagination solves many riddles, including why Padraig Pearse didn’t sign the Republic’s Proclamation first and whether those infamous GPO steps really did exist.

Oh, and who actually wrote the Book of Kells?

And the Sunday Business Post flagged the vibrant book as its Object of Desire for 1916 collectors earlier this month.

The Red-Letter Day by SP McArdle is published by SP.PublishINK (€10 from www.sppublishink.com)