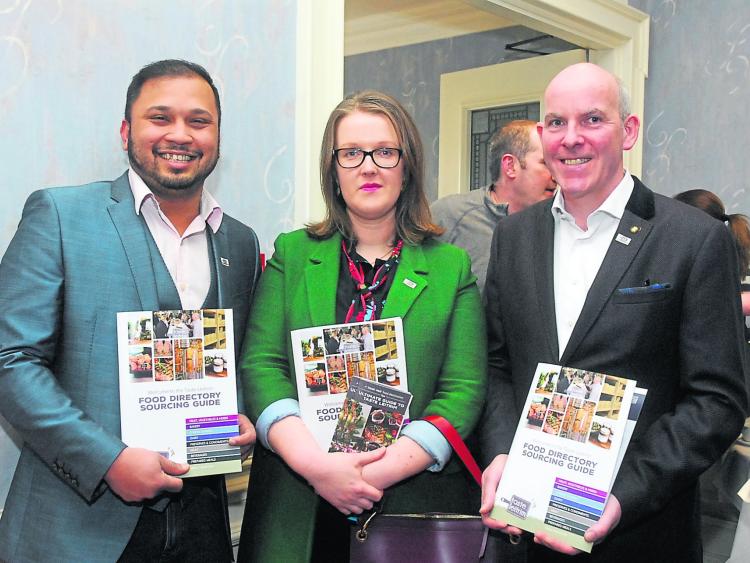 Chef Shamzuri Hanifa from The Cottage, Deidre O'Connell from Lena's Tea Room and Joe Grogan of the Luna restaurant, Dromahair.

Leitrim food businesses attended the launch of the “Ultimate Guide to Taste Leitrim” which covers places to eat, food trails, culinary adventures, food experiences all over the county.

The launch is part of the Leitrim Food Strategy that was launched in 2017 for County Leitrim which  will see a number of actions in relation to developing food and food businesses in Leitrim over the coming years.

One of these was to develop an offline marketing tool to further promote the taste Leitrim online presence and as a result of this 'The Ultimate Guide to Taste Leitrim; in the form of a Food Trail Brochure and Map was launched in the Landmark Hotel on Wednesday March 7th.

The Guide covers places to eat, food trails, culinary adventures, food experiences, it lists all the places to eat around the county along the various Taste Leitrim food trails a total of 72 venues in which to sample Leitrim Cuisine.

In addition a Trade Directory and Sourcing Guide has been compiled for use by chefs and buyers when sourcing a new food product. The hope being that as much local produce as possible would be sourced locally.

As part of the map there is a few suggestions for day trips and areas around the county that people might like to take during their stay.

Joe Lowe, Head of Enterprise commented “ we are delighted to be able to support the production of this very practical guide to places to eat in Leitrim and we feel it will be a great addition to the food and Tourism sectors in Leitrim.”