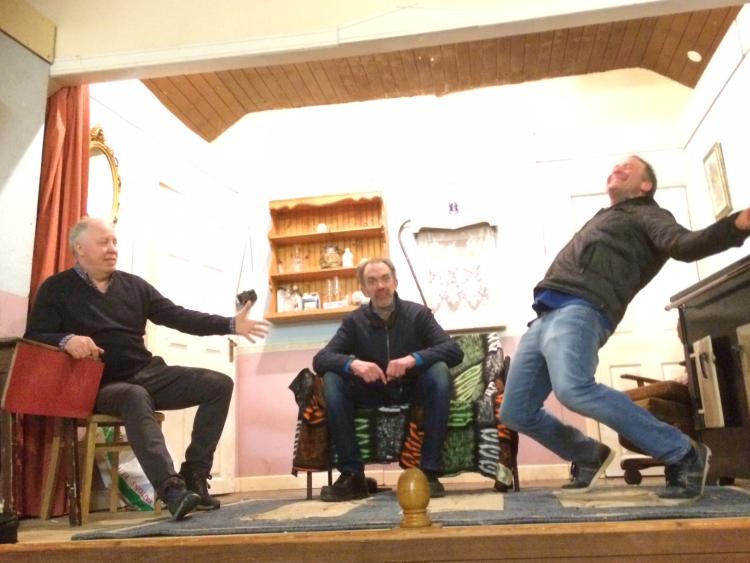 The Acorn Players were very successful with their last production ‘The Two Loves of Gabriel Foley by Jimmy Carey. This great comedy was performed  in theatres and halls throughout Ireland and beyond with great success for three years.

Fans of The Acorn Players will be glad to know that after a two year lay-off the troupe is back on stage with a new three Act comedy by Ballyconnell man John McManus.

‘Loophole’ is the title and it has an intriguing traditional but very modern air about it. Phillip Flood and Padraig McLoughlin were the stars of the last play and they are also centre stage in ‘Loophole’, playing two farmers Paidi and Cass, who- to put it mildly- have a complicated relationship. James Grimes a newcomer from Longford plays Paidi’s lazy fun loving brother. Anne Macklin plays a smart lady from Poland. Anella McGuinness is the farmers hoity-toity solicitor. Martina Harte and Rosaleen Kiernan play two nosey neighbours and Edel Palmer plays a small but important cameo part in the last scene. Orla Redican is the Director of this play. Stewart Davies is on sound and Annette Kivlehan and Maureen Lynch and Don Flynn Backstage crew.

The premiere of ‘Loophole’ will be staged in Gorvagh Community Centre on Thursday March 22nd and 23rd at 8pm.