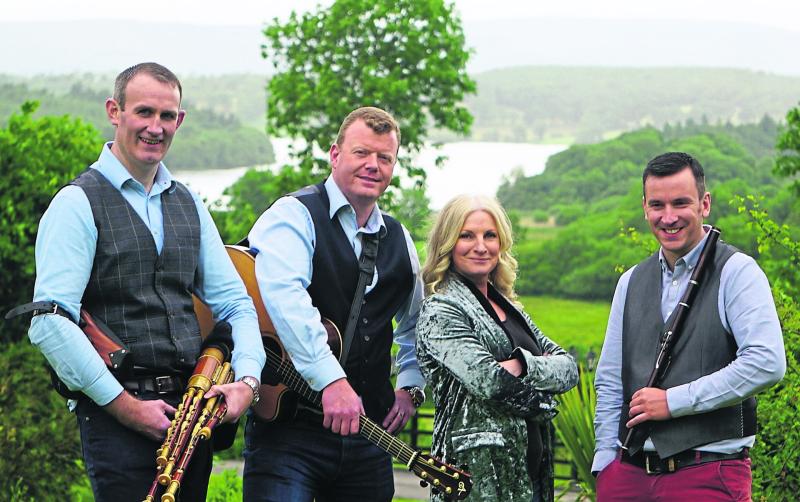 Ballinaglera is the place to be this weekend as we host our 9th Annual traditional music weekend.
The concert tonight, Friday, October 5 features the new Leitrim super-group Garadice. Having met during their collective time touring with The Leitrim Equation, this dynamic four piece collaborative made the decision to start recording and touring together.
An eclectic mix of songs and tunes, ‘Garadice’ was commenced during the summer of 2017 in the cottage of legendary flute player John McKenna, high up in the hills above Tarmon in North Leitrim. Garadice are Dave Sheridan (flute, accordion, piano), Pádraig McGovern (pipes, whistle, concertina), John McCartin (guitar) and vocalist Eleanor Shanley.
Together they present beautiful arrangements of songs and tunes, some original and some of which have not been played for over 200 years. Debut album available on the night!
The concert takes place in Ballinaglera Community Hall with a 9pm start. Doors open 8pm. Entrance is €12 which includes refreshments!

Saturday, October 6
On Saturday night,  October 6 there will be two fabulous gigs in the very traditional surroundings of Skerry Rynn’s and Mulvey’s public houses!
In Skerry’s a huge welcome awaits Rita Farrell from London on uilleann pipes and flute, Sarah Egan from Boyle on fiddle and joining them on the night will be Ballinaglera multi-instrumentalist Declan Gilmartin on fiddle and harp, whilst in Mulvey’s there is Dave Sheridan on flute from Leitrim who will be togging out with the Fermanagh accordionist Darren Breslin.

Sunday, October 7
There is a packed programme on Sunday, October 7 which kicks off at 12.30pm in Mulvey’s with a segment of the Iron Mountain Literature Festival 2018.
This Iron Mountain Session will feature renowned fiddle player and composer Danny Diamond, dancer Edwina Guckian, a number of local musicians, writer Vincent Woods, fine South Leitrim singer Alan Woods and others taking part in the Literature Festival.
Preceding the Iron Mountain session an oak tree will be planted to mark the 220th anniversary of the 1798 Rebellion and to honour the enduring spirit of freedom, democracy, and arts and music beyond borders.
At 2pm in Ballinaglera Hall there is a sean-nós dancing workshop hosted by young talented dancer Ryan Owens from Strokestown. Admission is only €5 and is suitable for all ages!
Meanwhile in Skerry’s public house, proceedings kick off with the always popular youth session at 4pm which features the up and coming stars of the area led by their mentor Pádraig Sweeney, which is followed at 9.30pm by a highly talented trio from Dublin’s fair city, namely; Méabh Mulligan (concertina), Siún Glackin (fiddle) and Ruth McCrohan (flute).
The final session in Mulveys, starting at 9.30pm features the mighty musical twins from Ballymagovern outside Ballinamore, accordionist Rachel McGovern and twin brother Andy on banjo. All musicians welcome to all of the above pub gigs!
On Sunday evening there will be traditional cooking methods enacted such as, butter churning, bacon and cabbage and soda bread baking, all hosted by John Reynolds of Gortletteragh.
If the finest in traditional music, song, culture and dance is your thing, then picturesque Ballinaglera, on the north eastern shores of Lough Allen, is the place to be this weekend! See you there!!
For information check out the facebook page, email gleraweekend@gmail.com or text 087 6904498.