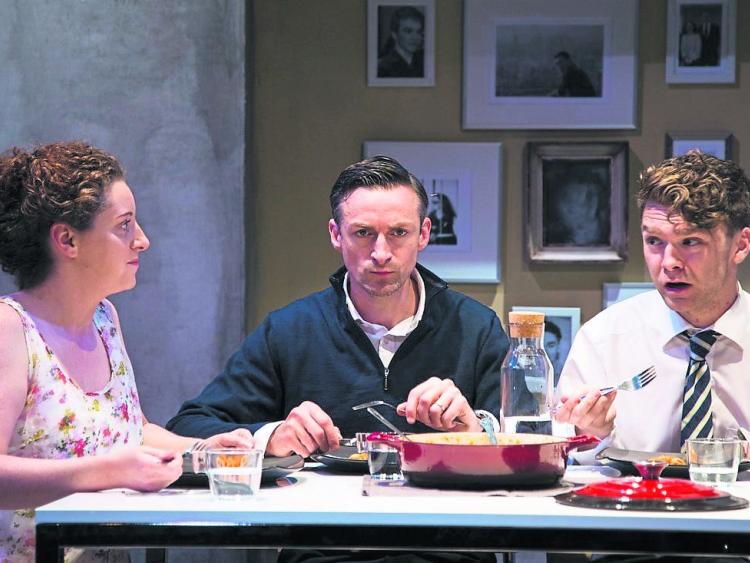 The Harvest is coming to The Dock, Carrick-on-Shannon.

Coming up on April 11 at The Dock, Carrick-on-Shannon have a terrifically reviewed play, The Harvest, presented by Witchwork and The New Theatre in Dublin.
It’s a very dark, funny and clever and packs a lot of emotional wallops.
Written by Jane McCarthy it explores a world of “second chances and second lives.”
Jane is also a novelist and her first book, Honest, was shortlisted for the Irish Writer’s Novel Fair in 2015.
Charlotte (Melissa Nolan) has a troubled past. She has a history of drug and alcohol addiction brought on by a personal tragedy, but has been on the straight and narrow for a long time and is starting to get her life back together.
Her son Evan (Stephen O’Leary) is the one rock in her life. She is volunteering at a local charity shop and her next step is a paid job.
Her husband Malcolm (Marcus Lamb) is not so sure. He is worried that the stress of the situation will cause her to start using again.
One day she brings a friend called Shane (John Morton) home from her group therapy.
He stays for dinner which seems to annoy her husband Malcolm more than it should. Slowly it is revealed that Shane is not the perfect stranger he appeared to be.
The stellar cast is made up of Stephen O’ Leary, Marcus Lamb, John Morton and Melissa Nolan.
Stephen has an extensive background in theatre and has starred in RTE Comedy drama series Can’t Cope, Won’t Cope.
John is an actor, writer and film maker. He is a founding member of Devious Theatre in Kilkenny and White Label in Dublin. He has starred in Love/Hate and Republic Of Telly.
Marcus Lamb played Pádraig Pearse in recent RTE 5 part series Rebellion and he has acted in Game of Thrones and Vikings.
Melissa Nolan is an actor and producer. She co-founded Mouth on Fire which has produced over twenty productions, specialising in Samuel Beckett’s work.
Don’t miss out on this amazing production and book your tickets on www.thedock.ie or call the box office on: (071) 9650828