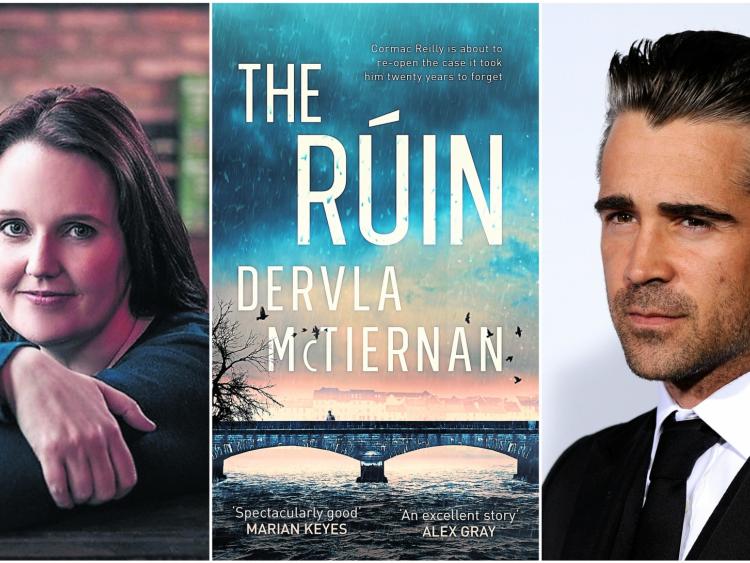 Author Dervla McTiernan, whose father Enda McGowan hails from Newtownforbes, has had her debut novel, The Rúin, chosen by Colin Farrell as his first movie production.

Dervla McTiernan, the bestselling and critically acclaimed author with strong Longford connections, is celebrating this week after her debut novel, The Rúin, was chosen by Colin Farrell as his first movie production.

Dervla’s father Enda McGowan hails from Newtownforbes and she spent a lot of her childhood in the village, exploring the area and playing with her cousins, the Quinns.

However, after being badly hit by the recession, she and husband, Kenny, left for Perth, Australia to begin a new life in 2011. They have two children Freya and Oisin.

Dervla began to write seriously in mid-2014. She signed a contract with Harper Collins in October 2016 and The Rúin was published in February 2018.

She followed this up with The Scholar in March 2019 and in 2020, her third book, The Good Turn, is set to be published.

A fortnight ago, eighteen months after its publication, The Rúin was number one on Apple Books in Australia.

It was the winner of the prestigious 2019 Davitt Award for Best Adult Crime Novel and it has also been shortlisted for the Australian Crime Writers Association Ned Kelly Awards 2019, which will be held in Sydney this Friday, September 6.

The Rúin is a thriller, set in Galway, and it follows detective Cormac Reilly as he is thrown back into a case from twenty years before involving two children - Maude and Jack - whose mother died of an overdose.

The Rúin opens with a scene at an old crumbling hunting lodge where the children in situ are descendants of an old Anglo-Irish family.

At the launch in Longford library, Dervla revealed, “It’s funny the things that really stick with you. When I was a little girl, there was one time when we visited Longford and my aunt Eimear brought us for a walk around Castleforbes.

“She brought us across fields and in a back way, and for a child when you come through a hedgerow and these paths open up in front of you into lily ponds and everything else, it is just magical. And I think there is something of that almost other world in the book.”

Dervla underwent surgery in summer 2016 to have a brain tumour removed and almost simultaneously she received an email from a literary agent telling her that she had read the first 50 pages of The Rúin and she loved it.

Surgery went well. She completed the book. “The whole journey in the year and a half since then has been just surreal,” reflected Dervla.

The Rúin will be the first project for Colin Farrell’s new production company Chapel Place Productions, which he is running alongside his sister Claudine.

They will be teaming up with producer Lee Magiday and Hopscotch Features on the screen adaptation of Dervla’s book.

Dervla doesn't expect to be involved in adapting her book for Farrell. "I kind of know how to write a novel, but screenwriting is a different challenge."

She is delighted that the Farrells have made The Rúin their first project.

In an interview with The Age and The Sydney Morning Herald, Dervla remarked, "I feel it's a real vote of confidence. Lee Magiday is involved and she produced [Oscar-winning 2018 film] The Favourite, which I absolutely loved."