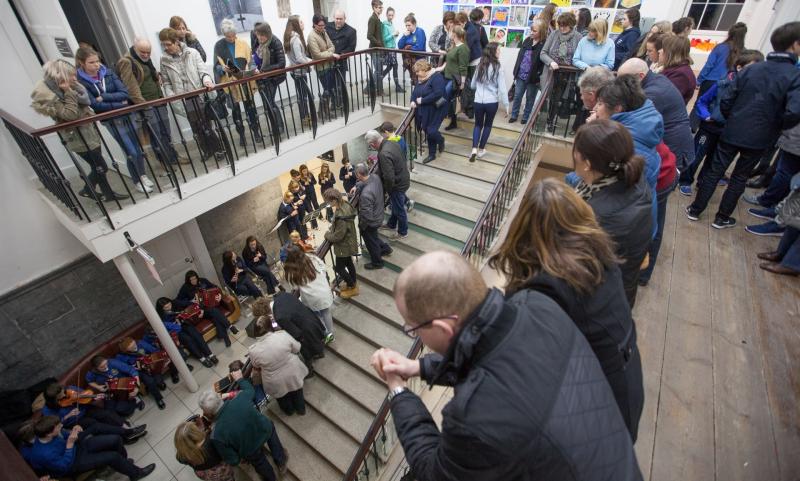 Ahead of Culture Night this Friday, September 20 an ambitious new creative network is set to launch this week across counties Leitrim, Longford, Roscommon and Sligo.

Spearheaded by The Dock in Carrick-on-Shannon, Creative Counties brings together six of Ireland’s leading cultural venues across four counties. Collectively, the network will initially focus on shared projects, enhanced communication and audience development, harnessing synergies and communities across the four counties.

The programme was awarded a Creative Ireland National Award and is supported by Local Authorities in Leitrim, Longford, Sligo and Roscommon.  As well as The Dock, the network includes Sligo’s Hawks Well Theatre, Backstage Theatre in Longford, Roscommon Arts Centre, and The Glens Centre and Leitrim Sculpture Centre both in Manorhamilton.

Commenting on the launch of the network, Sarah Searson, Project Director, and Director of The Dock, said: “We are delighted to present the work of the Creative Counties network to the public following a busy few months for our participating venues and artists. The opportunity here is to really drive home that the social and community value and the great work undertaken by arts centres in the region. This year is about breaking ground, and we really look forward to progressing it further in 2020.”

This network brings together venues, audiences and creative communities through sharing projects which focus on the performing arts, music and theatre.

The first three projects presented by the network this autumn are shared between two cultural centres, Backstage Theatre and Roscommon Arts Centre, The Dock and the Hawk’s Well Theatre, and the Glens Centre and Leitrim Sculpture Centre.

The Dock and Hawk’s Well Theatre will commission and produce a music project across Sligo and Leitrim. This project harnesses the wealth of creativity and talent available across the two counties and is being produced in conjunction with a number of highly skilled creative leaders including: Michael Rooney, Niamh Crowley and Kellie Hughes.

Through a series of workshops in both Sligo and Leitrim, two groups of young traditional musicians will meet with master musicians; attaining skills, broadening their musical horizons and working on a body of newly commissioned pieces of music written by renowned composer Michael Rooney.

Separately, a community orchestra in Sligo will expand to include interested musicians from Leitrim and two chamber music groups are being formed in each county will rehearse the newly commissioned music also.  The project will culminate in two performances (one in each county) which will showcase the development of creativity which the project has enabled and nurtured.

A cross-disciplinary performance based collaboration, this project sets out to develop and establish new performing and performance art opportunities jointly at the two Centres and and realise new site-specific performance based methodologies working with local communities.

The project began in May 2019 with the commissioning of two artists in residence, Little John Nee and Sandra Corrigan Breathnach. Both artists have spent time researching and developing projects in collaboration with community members and in relation to the historical contexts and material environments of Manorhamilton and the North Leitrim area.

Residency artists will develop projects with local communities through a series of workshops that will take place both at the two Centres and at a number of sites and outdoor locations around the town. The work undertaken within the workshops will evolve and give shape to an ensemble of related performance works to be presented to the public at the end of October 2019.

Maisie Lee has been engaged as Artist in Residence at Backstage Theatre Longford. Backstage are funding the residency under their Arts Council Strategic Venue Funding for 2019. During the Residency the Artist will work on the development of new professional theatre for children 'Luminaria' and will deliver a playwriting project for children.  On foot of the Creative Ireland Network funding, Backstage agreed to share both elements of the residency with Roscommon Arts Centre to broaden the reach and deepen the impact of the artist’s work and Roscommon Arts Centre agreed to invest additional money into the project to cover the cost of the delivery of the project in Roscommon.