New seminar to challenge cultural ideas at The Glens Centre 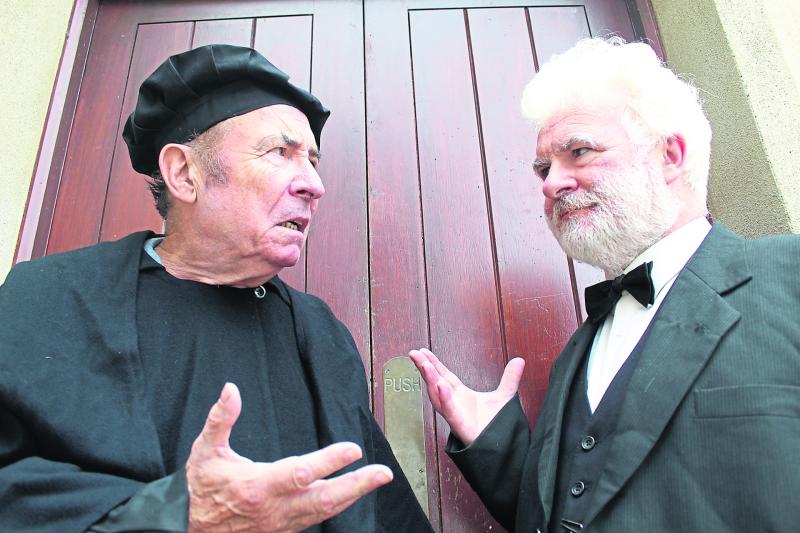 Gerry Farrell as the anaylst and Michael Roper is Martin Luther in 'The First Protestant'.

The Across the Lines IFI programme at The Glens Centre, is creating a new opportunity for cultural discussion and dialogue from south to north.

Individuals, leaders, teachers and those interested in cultural expression, cultural ideas, voice and questions of identity and belonging are invited to take part, connecting with one another across community backgrounds and with the historian Connal Parr.

This seminar is organised around the theme of The Ulster Protestant Imagination and weekly sessions will focus on the writings of a northern or border-based playwright writing out of a Protestant community background, or about a Protestant experience.

The weekly seminars will encourage discussion and cultural investigation, with time given over each week to considering the viewpoints of creative writers, some of whom may be household names, such as, John Hewitt or Thomas Carnduff, as well as texts by lesser known or forgotten writers, such as, Stewart Parker and Maurice Leitch.
Relevant to rural border areas, the programme will also consider the voices and works of John McGahern, Frank McGuiness and Eugene McCabe, as well as those of Dave Duggan and Jonathan Burgess.

Designed to share cultural ideas and create discussion, texts and video clips will be provided along with the opportunity to engage with a number of guest speakers including Marie Jones, Dave Duggan and others.
Participants are assured they do not have to have read any of the plays or books in advance. The final evening will take a step out of Ireland and Northern Ireland to a northern european stage in another era with the performance The First Protestant.
This two man play written by the Leitrim playwright Gerry Farrell and performed by Michael Roper and the author, follows on from a successful tour at the start of this year. The First Protestant presents the life and struggles of the reformationist Martin Luther.

The series of seminars will challenge stereotypes and one-dimensional portrayals of this diverse and sometimes conflicted group.
IFI Project Coordinator Ruth Gonsalves Moore affirms that this is “an opportunity to gain a greater insight into the diversity of outlooks and the history of cultural imaginations” and in stimulating new conversations and by bringing people together over eight weeks valuable south to north or north to south connections may be made.

Thos interested should call Ruth on 087 1669951.
Additional tickets will be available for the play sooner to the date.