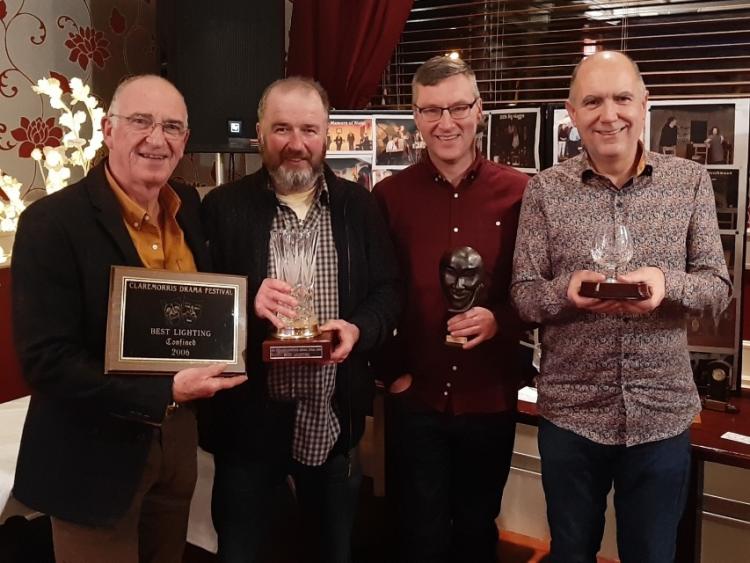 There was a night of celebration, nostalgia and remembrance in Dromahair last Friday as the Lough Gill Players celebrated their 30th anniversary and made a special presentation to one of the group’s stalwarts.

In preparation for the anniversary night, attics, cupboards and scrapbooks were trawled through as a wonderful collection of memorabilia was put on display to showcase the group’s rich history.

Pictures, posters, programmes and awards from the group’s 30 years were all displayed with a full house present in The Clubhouse for the trip down memory lane.

Anyone with any involvement with the group, from treading the boards to helping backstage, was invited to attend the celebration with old friends renewing acquaintances and reminiscing about productions from yesteryear.

As well as the collection of memorabilia, there was also a memorial tree on display bearing the names of all deceased members of the group.

The formalities of the night saw a number of speeches made to reflect the group’s successes with Fiona Kuehl beginning by paying tribute to two of the founding members who are sadly no longer with us.

She recalled the role played by Jim Boles and Fr Patsy Young in the early days as they established a thriving drama scene in the community.

Fiona said: “Fr Young had a passion for drama he was determined to share with his parishioners in Dromahair.

“I would like to pay tribute to all the members, past and present, they played an integral role in keeping the flame lit.

“A great number of families have been tending to the flame since.”

Fiona noted the group is not a profit making organisation saying almost €15,000 has been donated to charity by the group throughout its history.

She also referred to the awards that were on display saying: “they are a testament to the huge amount of talented individuals. Everyone involved should be very proud.”

While the group is a wonderful social outlet for all involved, it also takes a considerable commitment and hard work with Fiona saying that while having fun is of considerable importance she stressed: “All of us know the countless hours spent in the dark nights of winter.

“It’s not just for a laugh. We have a reputation built on high standards and we strive to maintain those.”

Fiona concluded by saying: “In 1991 I joined as a teenager looking for a hobby. I have gained a lot from the various roles in the years since and I am very proud to be involved.”

The night’s special guest, John McDwyer, a former resident of Dromahair and known throughout the region for his involvement in amateur drama spoke glowingly about the rich contribution made by the group to the local community and to the wider amateur dramatic scene.

John began by paying tribute to Fr Patsy Young saying: “everywhere he went he left a legacy behind him. He left a huge impact and I really miss meeting him because he always told you the truth.”

John also offered a word of advice to the group as they plan for the future, urging them to participate in festivals wherever possible, insisting it will help them to maintain and improve the standards they have set.

“I think all groups should do festivals occasionally just to test their standards. Everyone is a hero in their own house. You don’t really know if you are mighty until you go somewhere strange.

“I’ve seen a lot of your productions over the last few years and they would all hold their own at any festival.”

John concluded by wishing the group well for the future saying: “I have the deepest respect and regard for the group. To see so many people have taken part, shows you are an open and welcoming group and long may that continue. Ar aidh leis an obair!”

Arguably the highlight of the night was a presentation to Martin Dolan, described by Fiona as “one of the group's greats.”

Looking back on his career on the stage Fiona recalled he took his dedication to his craft so far as to eat raw eggs on stage!

She joked that throughout their involvement together with the Lough Gill Players she had been “married on stage” to Martin, tried to direct him, thought he was going to blow everyone up and even saw him play dead, adding, “he was a great colleague to work alongside.”

Fiona added she has been “in awe at some of his performances” and expressed her pride at being able to induct the group’s honorary president,Martin, into the Lough Gill Players hall of fame.

I Do Not Like TheeDr.Fell - Teaser from Rory O'Brien on Vimeo.