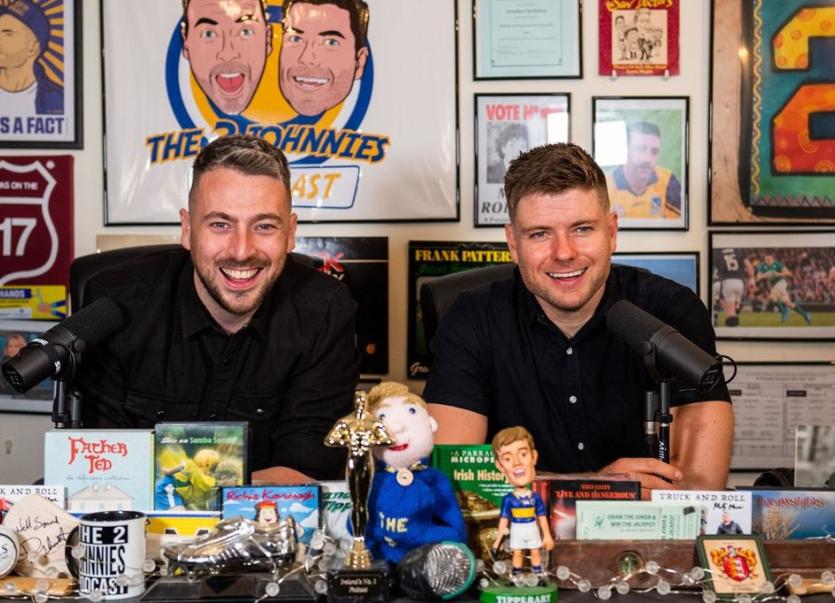 In news that is hotter than fresh tay, the popular musical comedy duo The 2 Johnnies, AKA Johnny McMahon (Johnny Smacks) and Johnny O'Brien (Johnny B), have announced they will join a whole host of international talent by bringing their podcast exclusively to Spotify from Monday, June  14.

The pair, who are well known for their comedy sketches that capture the uniquely funny side of all things Irish, launched ‘The 2 Johnnies’ podcast in 2018, quickly becoming Ireland’s fastest-growing podcast with one million listeners every month and over 30 million listeners tuning in over the last three years. Together, they have had nine number-one singles, a sold-out live tour visiting the UK, USA, Australia, a sold-out 5,000-capacity arena show in Ireland, and are just about to record the second series of their The 2 Johnnies Do… TV show.

The newest addition to the Spotify Exclusives family, the podcast is a must-listen for comedy fans. A mixture of comedy, current affairs and sport - or as they might put it “riding, Gaelic games and parish news” - the pair host their weekly hour-long episodes in their very own studio in the heart of Co. Tipperary, frequently welcoming an array of interesting and exciting guests, previously featuring Ireland rugby international Tadhg Furlong, comedian Tommy Tiernan, sports promoter Eddie Hearn, food and lifestyle guru Roz Purcell and more.

Listeners also get their chance to be involved with hundreds of letters sent in every week, with the best comments, thoughts and rants submitted being read out and discussed on every episode, while beloved character ‘Noel Furlong’ gives his hilarious tuppence worth on the week’s headlines and local gossip in only the way an Irish man can with his segment ‘Noel’s News’.

The exclusive move to Spotify follows on from the hosts’ ambition to expand their audiences and improve discoverability amongst listeners on the Spotify platform. With comedy being one of the most popular podcast genres on Spotify, The 2 Johnnies will be added to Spotify’s existing comedy content hub, joining the likes of Brydon & JaackMaate’s Happy Hour, The Receipts Podcast, Sorted with the Dyers, Rose and Rosie: Parental Guidance and more.

172 weeks ago we rang the one fella we knew who knew about podcasts and asked him how to upload it, we wanted to a podcast for the man in the van, the girl making the chicken roll, the lad on his way home from a few pints, now we are gonna bring it to the whole world and we can’t wait. Here is to the future. Thanks to everyone who supported us, we are gonna drive it on for ye. The 2 Johnnies

Head of Studios, Spotify UK and Ireland James Cator commented: “There’s so much great talent coming out of Ireland and we’re massive fans of Johnny and Johnny: what they’ve achieved in such a short space of time as the fastest-growing Irish podcast is pretty inspiring! We look forward to welcoming them to the ever-growing Spotify Exclusives family alongside the likes of Rob Brydon, Niall Breslin, JaackMaate and The Receipts.”