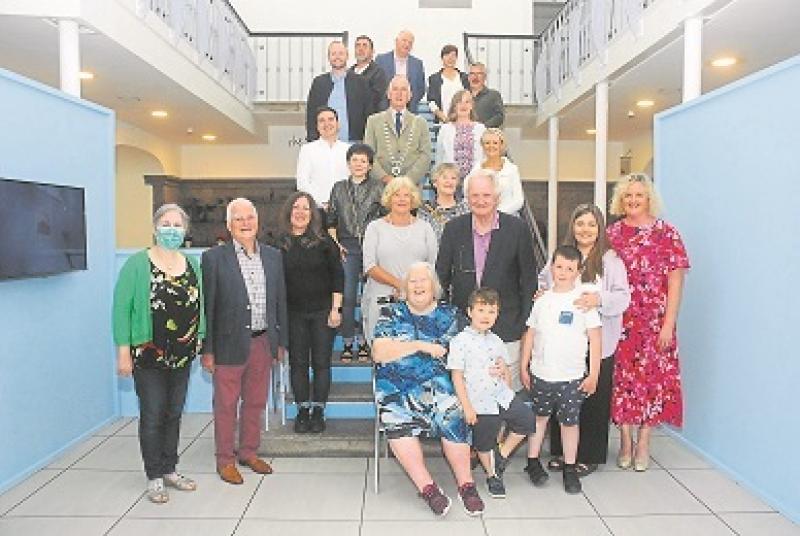 Members of the Burke and Holt families with Paddy O'Rourke, Cathaoirleach LCC, and staff members of The Dock. The rededication took place on Friday, August 20

The families of Tina Burke and Lila Holt were joined by Cathaoirleach of Leitrim County Council, Paddy O’Rourke, Chairperson of The Dock Board, Seamus Newcombe and staff members of The Dock and Leitrim Design House on Friday to honour the work and lives of Tina Burke and Lila Holt.
At this informal gathering two of The Docks beautiful reception rooms were named officially in honour of Tina and Lila.
The large bright art and workshop room, used for painting classes and childrens educational projects is now The Tina Burke Room, and a smaller room with beautiful dual aspect windows which overlooks Hatley Manor, is now The Lila Holt Room.

Tina Burke was an artist, designer and teacher. She led and inspired a generation of young people through her career as a teacher in Carrick-on-Shannon. Tina was also a very talented artist and supporter of the arts in the region.
Her husband John Burke was joined at the celebration by his daughters Fiona, Áine and Una and son Martin.
Lila Holt was well known to regular attendees at The Dock. She was the shop manager of The Leitrim Design House and was renowned for supporting and championing Irish design and craft in the region.

Her sister Mary Cooke, niece Johanna, nephew Tim and extended family were in attendance also.
In addition to the dedication of the rooms in memory of these two inspirational women, The Dock, with the support of Leitrim County Council and The Arts Council is proposing to offer two graduating students in the arts a small award in their honour.
The intention of this award is to develop, acknowledge and highlight the work of an emerging artist, designer, writer, performer or architect graduating in the region in 2022. This award will support the development of their career and practices. Further details about it will be announced next year.

Sarah Searson, Director at The Dock, said “Everyone who knew Tina Burke was lucky, and struck by her talents, warmth, generosity and kindness. Lila Holt was a really treasured colleague, she was such an important person at The Design House and The Dock, with her brilliant sense of fun and enormous capabilities, we were all in shock when she left us so suddenly.
“Today, as we name these rooms and launch two new awards in honour of Tina and Lilia, we hope to pay tribute to their lives and thank both families so much for allowing us to do this – and we hope that their spirit of creativity can influence new generations.”