Irish and Japanese music: Concert in The Dock on May 20 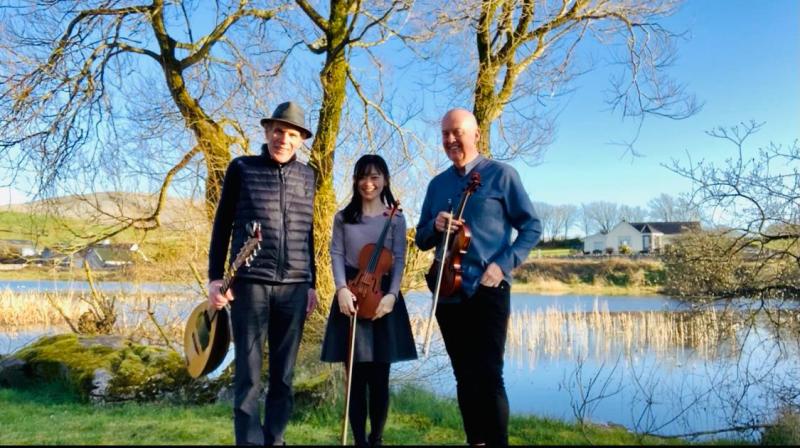 In April 2022, renowned fiddle player Manus McGuire joined forces with Japanese fiddle player Mareka Naito and with erstwhile Buttons and Bows gem, Garry O’Briain, to bring their music to showcase the passion and joy that is still possible to experience in this complex world.

The results of that coming together will be in evidence when the trio visit The Dock in Carrick-on-Shannon on Friday, May 20 for a night of music and the celebration.
Manus McGuire grew up in Sligo and is now resident in East Clare. His musical gift became widely recognised at a young age when he won the prestigious Fiddler of Dooney, Irish national fiddle competition, at age 14.
Since then he has gone on to record fifteen albums, with Buttons and Bows, Moving Cloud, Brock McGuire Band and Full Tilt, as well as three solo fiddle recordings.

McGuire is honoured to have been voted 'Male Irish Traditional Musician of the Year in the US' in 2006 by the Irish American News in Chicago.
Mareka Naito started playing classical violin at age 3 and won numerous  competitions such as the Japan Classical Music competition and Velsus  International Junior Competition (Italy). She first discovered Irish traditional music in 2007 and began her journey of learning to play Irish fiddle.

She is also proficient in harp and concertina. She tours regularly and has recorded with Japanese virtuoso guitarist, Junji Shirota and was on his recordings with Frankie Gavin and Paddy Keenan.
Garry O’Briain is one of the most sought after and distinguished accompanist  in Irish traditional music.
His distinctive style on mandocello and guitar is so recognisable and reflects his remarkable skill and ease in a number of musical genres.
He has been a member of landmark Irish music ensembles including Skylark, Buttons and Bows and Boys of the Lough.
His list of recording projects as a session player is extensive; he has written music for stage, film and television, as well as over a hundred songs.