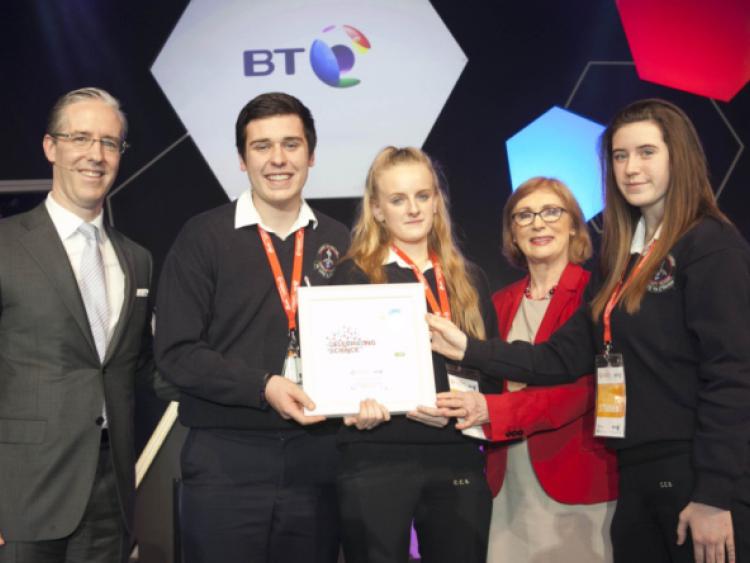 Carrick-on-Shannon Community School are celebrating their best and their brightest this week after three of their Transition Year students claimed the Runner-Up Award in the Group Category at the BT Young Scientist Awards in Dublin.

Carrick-on-Shannon Community School are celebrating their best and their brightest this week after three of their Transition Year students claimed the Runner-Up Award in the Group Category at the BT Young Scientist Awards in Dublin.

Patrick Sweeney, Chloe Daniels and Annette Moran saw their project, which was entitled ‘Birdsong and Music: Connections between African and Irish music and development of a new music genre based on the Galápagos Islands’ birdsong’, finish in second spot in the competition which featured over two thousand entrants.

The group received their award at the RDS in Dublin last Friday evening. Speaking to the Observer this week, each of the students told of their pride and excitement when they were made aware of their achievement. “We were all shocked, it was a great experience”, Patrick said. “We never thought we’d be anywhere near the top of the group”, Chloe beamed. While Annette took the time to thank all of those who had assisted and supported the project. “All the staff were great in helping us. Also the parents who took the time to come along and take an interest in our project. We learned so much.”

As part of their prize, the group will attend a five day Business Bootcamp in UCD in March. They will also meet and work with Irish and Congolese musicians Padraig McGovern and Niwel Tsumbu who both plan to compose works of music based on the project’s findings. The project has also attracted interest from world renowned neuroscientist and author Dr Daniel J Levitin from McGill University in Canada.

Leitrim was also represented by Conor McGrath of Ballinamore Community School (pictured right) who entered his project “The effect of the hardness of water on the germination of plants”. Conor’s project was entered in the Biological and Ecological category.

St Clare’s in Manorhamilton was represented by two projects. Emer Clancy, Niamh McInerney and Aoife Feeney submitted their project “Investigating the different sequences, patterns and key changes in popular music and how it differs in the success of the song”, in the Chemical, Physical and Mathematical Sciences category.

While Ciaran Gordon, also from St Clare’s, impressed judges with his project which investigated the charging of smartphones in areas with an inconsistent power supply. Ciaran submitted his project in the Technology category.