Whether your name is Sadhbh or Meadhbh or you know your Quinoa from your Acai – Ireland’s most commonly mispronounced words have been revealed!

New research from global tech giant Huawei, found that Ireland’s Caoimhes, Muireanns, Tadghs and Blaithnaids were all beaten by Sadhbh (Sai-v) for the top spot of most regularly mispronounced names in Ireland: with 25% of respondents picking the name. In addition, it appears that international influences on Irish cuisine are impacting on our ability to pronounce the foods we eat with Worcestershire, Quinoa and Acai all featuring highly as the most commonly mispronounced words in Irish dictum.

Of course, it’s not just people’s names or favourite foods that are regularly mispronounced in Ireland: brands too, suffer this same fate and the research carried out by Huawei found that more than 30% of respondents chose Huawei as the most difficult to pronounce brand name in Ireland (it’s pronounced “wah-way” by the way!).

The research conducted by Huawei coincides with the launch of the Huawei Mate 20 Pro and while there is some confusion surrounding its pronunciation, the quality of Huawei’s latest flagship handset cannot be mistaken.

The Huawei Mate 20 Pro is available now at Vodafone Ireland, Three Ireland, Carphone Warehouse Ireland and Harvey Norman and to support its launch, Huawei has collaborated with popular online Irish personalities; Senan Byrne, Cal Arnold, Clisare and dynamic duo “Lords of Strut” to create a series of funny videos to help Irish people understand and pronounce the global brand. The first of these videos sees renowned online comedian Senan Byrne create a hilarious mini mock horror movie which while making his audience laugh teaches them exactly how Huawei should be pronounced.

Commenting on the survey’s findings Huawei’s, Zena Ross said, “While there is still some confusion about how to pronounce the brand’s name, the recognition of this is simply because Huawei is growing so rapidly across Ireland! In 2018, already, we’ve seen a massive growth in popularity with the P20 Pro and more recently our Mate 20 Pro devices. Both phones are partnered with camera manufacturer, Leica and produce the most stunning images on any smartphone available, ensuring Huawei is leading the market in smartphone photography. We thought this fun piece of work would give the public the opportunity to get to grips with our name as they get increasingly fond of getting to grips with our smartphones.” 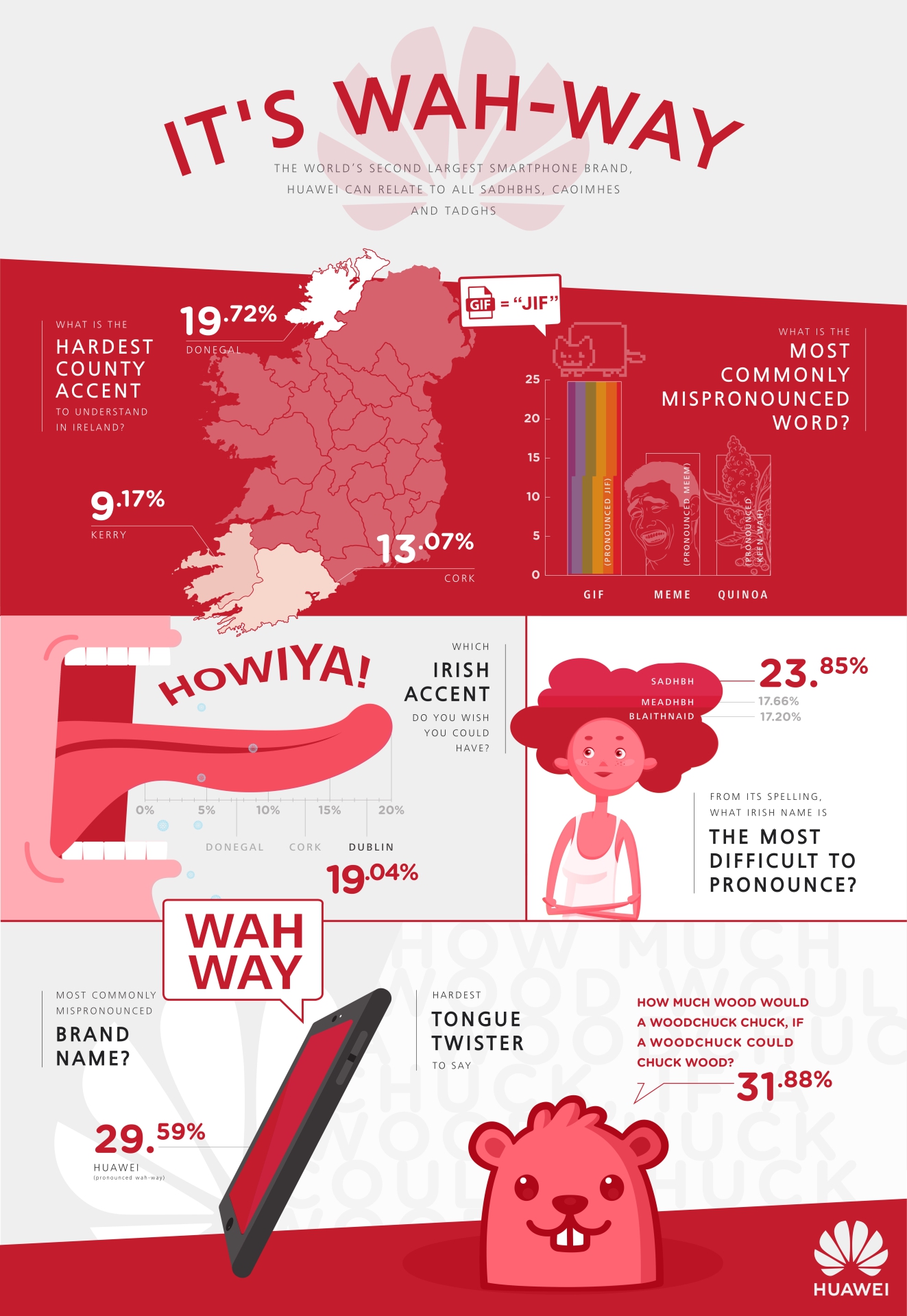