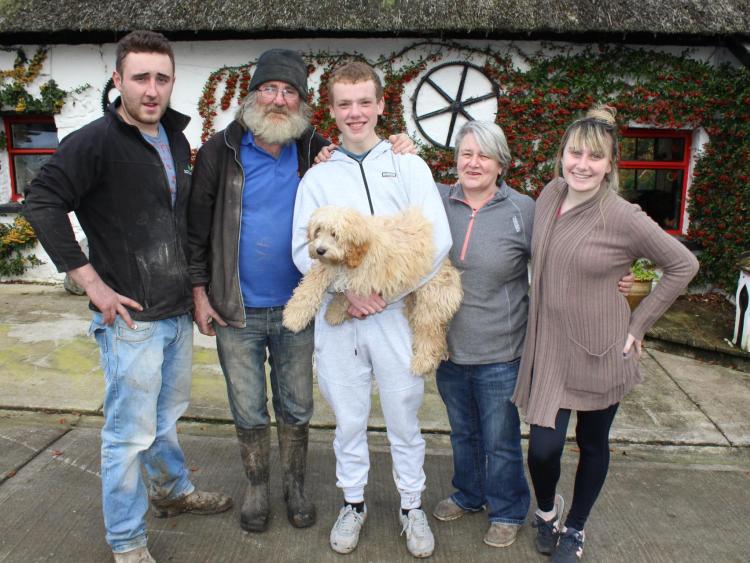 Scott with the Nixon family in Carrigallen in last year's show.

Following the massive success of the RTE show Raised by the Village which included a segment in Carrigallen last year, the show is back to Leitrim again this year.

The production company says they have recruited a “great family in Ballinamore” and are looking for another family in the area to get on board.
Marion Cullen from the show said the programme was originally ran as a once off, but “Carrigallen and Leitrim made such an impression, we are going to do four more!”

The show is expected to air in September and will take the same format as last year, a city teenager joins a country family and lives as they do for a week. The only difference is this time one episode will focus on Leitrim with two families.
The teenagers will gain a “new perspective and learn new things, get involved with others and see a life outside of their phone and their bedroom.”

Ms Cullen said this programme could help attract new families to the area from the city and help keep smaller schools open in the area.

The teenagers will join the family and partake in family activities as well as community ones, joining GAA, clubs, Foróige etc
Scott aged 16 from Dublin spent a week living with the Nixon family in Carrigallen last year and got involved in the local GAA, drama and Foroige, as well as learning about beef farming.
Scott's time in Carrigallen really turned his life around - from a teenager who was flunking school and spending his whole time on his playstation, he is now studying accountancy and has a part time job.

Also read: Ballinaglera family to perform on TG4 this weekend