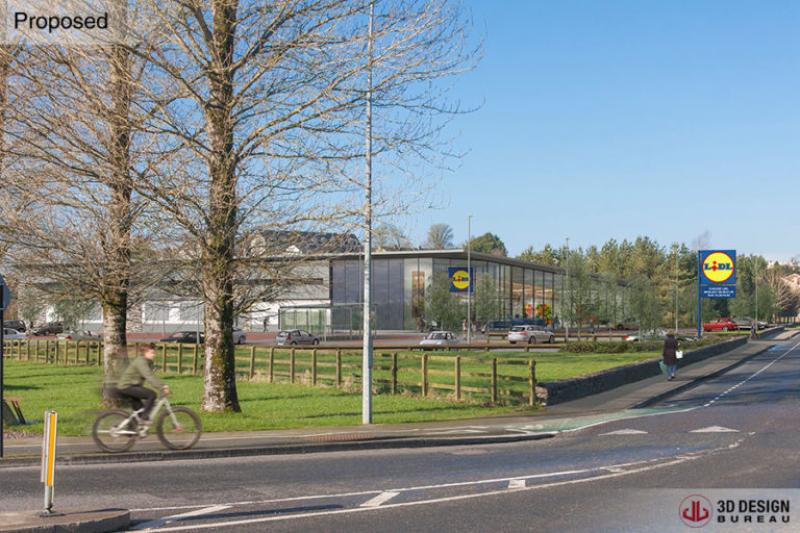 The planning application by AvantCard for a new Lidl store on the N4, Dublin Road, Carrick-on-Shannon has attracted the largest number of objections in the county in years.

A decision is due on Thursday, July 13 from Leitrim County Council on the application to construct a new two storey Lidl store on a green site in front of the MBNA building.

129 submissions have been made on the planning application and 126 of these are objections.
The other submissions come from public bodies and make demands from the council to supply information from the applicant about various aspects of the application.
The majority of the objections come from residents of Carrick-on-Shannon including Cortober. Letters are signed by individuals, businesses and groups.

The overall impression is that Lidl is welcome in the area but not on the site of the planning application.
The main objections follow a similar line to the public meeting held in Carrick-on-Shannon a number of weeks ago.
Objections focus on an increase in traffic to the area and at the Tesco roundabout, concerns over flooding and the use of the Circular Road as an alternative route during flooding of the N4.
The green and attractive site is cited as being an advantage to tourism and many objectors claim a successful Lidl planning application could have a possible negative effect on the potential to lure a multinational into the old offices of MBNA.
Many more also note health and safety issues for students from Carrick Community School who need to cross several lanes of traffic.

They strongly recommend that the “status quo remain and suggest the planning application be refused.”
Camdrow Ltd, Dublin outline that their client owns the 120,000 sq ft building opposite the site in question and they are objecting on the grounds that the construction would “detract from the setting and image of prestigious MBNA.”
They also note traffic issues and concern over flooding. They explain in their submission that Camdrow “acquired the former MBNA premises from AvantCard with the exception of this field which is subject to planning.”
They say they are “developing and marketing” MBNA as a large scale Irish and multinational business and “hope to accommodate 1,000 jobs.”

The HSE Food Control officer has concerns over possible flooding potential.
Local doctor, Kieran Greene, notes his objections in relation to ruining the attractive green site, an increase in traffic and concern that the site is on a flood plain.
Carrick Town Traders submit this is the “last green site” in the town and the planning would be in “contravention of the retail planning guidelines published in 2012.
They also point to the retail cap in Leitrim County Council’s Retail Strategy 2015-2021.

Resident John O’Callaghan says the site is “home to birds and animals.”
Keith Duignan put forward that planning permission has already been granted for petrol pumps off the roundabout and believes this application would conflict with that.
Resident Mary Glancy notes the long term “sinking of the N4” as a reason not to construct the Lidl store and bring further traffic to the area.

Gerard Fitzgerald claims that moving Lidl from Cortober to the Dublin Road would result in a “reduction in shopping in Cortober which would be the tipping point for businesses in Cortober.”
Carrick Tidy Towns have also submitted their objections and Tesco Ireland objects on grounds of concern over flooding and the effect the building’s design would have on the attractive approach.
Joe Dolan of The Bush Hotel and President of the Irish Hotels Federation believes granting the application would be of little to no benefit to the town.

Leitrim Councillors Sinead Guckian, Seadhna Logan, Des Guckian, Finola Armstrong-McGuire, Sean McGowan and Enda Stenson have also made submissions objecting to the application.
Cllr Sinead Guckian states the planning permission would go against the “Active Travel Town” project for Carrick-on-Shannon. Cllr Des Guckian stresses the building of Lidl on the site would “rob people of the only green “lung” in the area.
Boyle area Councillor Rachel Doherty notes the planning has already been refused on good grounds.
A number of people are also calling for the area to be rezoned.