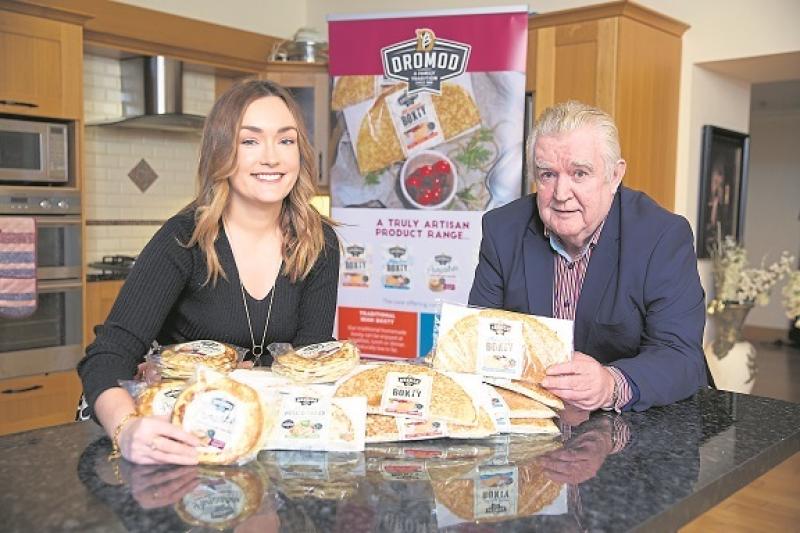 Dromod Boxty Managing Director, Aine Faughnan pictured with her father, Timmy, who founded the business with his wife, Angela in 1990

Based in lovely Leitrim, Dromod Boxty is justifiably proud of its heritage.
Starting out as a grocery shop in the heart of the village, customer numbers were dwindling but from this downfall started the growth of Dromod Boxty.
They first began making Boxty from a family recipe which had been passed down through generations. Shortly after setting up, they began making more products such as pancakes and potato bread which they still continue to make fresh daily. They are now an artisan second generation family run business that has been in operation for over 30 years, employing locally and sourcing ingredients as local as possible.
Things are ever changing in the business. From expanding the market by supplying to independent stores, restaurants, cafes, Supervalu, Aldi and are also exporting to USA. They have also undertaken huge upgrades to the premises with a lot of assistance from the Local Enterprise Office.
Entering a class of its own is a goal Dromod Boxty always want to achieve. They have received a Great Taste award and a Blas NaHEireann award for their products. They have become a Guarantee Irish member and most recently becoming a Runner-up in the National Enterprise Award. Dromod Boxty are well on the way to achieving their goal.
With Boxty being a traditional dish dating back to famine times, especially in the North-West of Ireland, Dromod Boxty is very proud of its Leitrim location and to be part of the revival of the potato pancake.