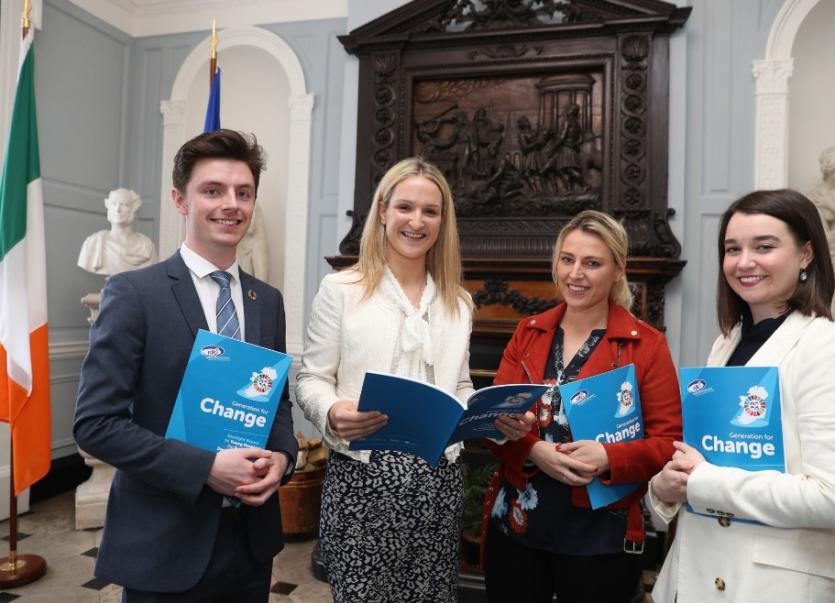 Pictured at the launch of their report ‘A Generation for Change’ are Ireland’s youth delegates to the UN, Lauren Flanagan and Paul Dockery with Minister Helen McEntee and Senator Lynn Ruane

Dromod native Paul Dockery, one of Ireland's youth delegates to the UN, was present at the Department of Foreign Affairs yesterday for the publication of a new report, 'A Generation for Change.'

According to the report, poverty, quality employment and homelessness are among the issues most concerning young people in Ireland.

The launch aims to highlight youth issues for the Irish Government ahead of its Voluntary National Review (VNR) at the July 2018 session of the High-level Political Forum on Sustainable Development.

The report ‘A Generation for Change’ is the outcome of a year of consultation carried out by Ireland’s youth delegates to the UN, Lauren Flanagan (24) from Manor Kilbride, County Wicklow and Paul Dockery (22) from Dromod. It includes quantitative data from over 600 young people surveyed, as well material from consultations at over 22 youth events including the National SDG Youth Summit in Croke Park last November.

Speaking at the launch, Ms Lauren Flanagan said, “This report provides a snapshot of some of the main issues that young people in Ireland face; the issues they are most concerned about globally; and how the 2030 Agenda for Sustainable Development may offer a road map to tackling some of these key concerns.”

Mr Paul Dockery said, “The aim of this report was to give young people a voice on the issues that matter to them most and bring their voices to the attention of the policy makers, politicians, diplomats and international institutions like the UN.

“We can be the first generation to end extreme poverty, the most determined generation in history to end injustice and inequality, and the last generation to be threatened by climate change. This is a really important time to listen to young voices and to empower young people to be a force for good in Ireland and in the world.”

“I would like to welcome and to thank Lauren and Paul, for all of the hard work and research they have put into this report and for being such exemplary representatives for Ireland over their terms as UN Youth Delegates.

The issues raised in the report are of great importance and, indeed, some are issues that we are yet to fully tackle here at home.  It is through this understanding that one is quickly reminded that the SDGs are not merely a series of objectives intended for developing countries, this is a universal agenda and the Goals help us all see and work towards bringing about needed changes in our own society. These are goals that we share globally.

Young people have perhaps the most important role to play as this is the world, and the Ireland, that they will inherit, and their voice has every right to be heard across all Government departments,” concluded Minister McEntee.