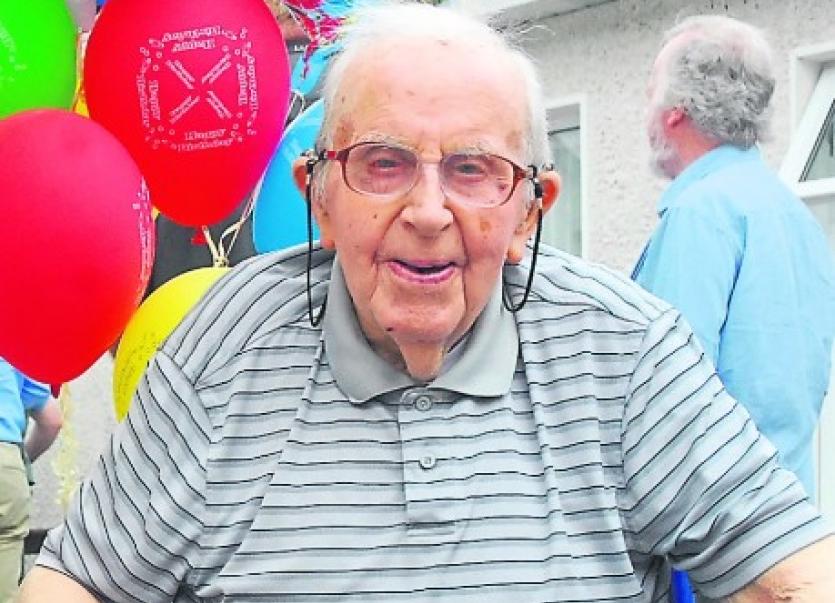 A photo of the late Pat Murtagh taken by our photographer Willie Donnellan on May 24 in Lough Erril Nursing Home on the occasion of his former neighbour Annie O'Dowd's 100th birthday.

“It is with deep regret that we learned of the death of our Club President Pat,” the club stated in a post on its Facebook page.

“Pat was a legendary figure in our club for all of his life and indeed played a major role in all aspects of the development of St. Mary’s GAA, from the early days of the late forties and earlier fifties as a player of high renown he progressed into an administrative role as Chairman and was to the fore when we purchased our first grounds Páirc Uí Chearnaigh.

“Pat was often seen over the years keeping this pitch in order and nothing made him happier than to see youngsters on this field every evening.

“In later years Pat maintained his interest in all club affairs and was always there to advise and help younger officers as they tried to carry the club forward.

“Pat also threw himself into the development of underage football in the early seventies and many great St. Mary’s players learnt their skills under the tutelage and patience of Pat who spent many hours coaching them.

“Indeed his Ford Anglia car was famous for the amount of players he could squeeze in, and travel the highways and byways to matches....there was no team bus back then!

“Pat did not restrict himself to St. Mary’s and together with the late George O'Toole was involved in the development of Páirc Seán MacDiarmada into the fine stadium we have today. Pat always gave of his time freely and was a proud and loyal GAA man.

“Pre-deceased by his wife Tess and grandson Shane. Pat will be sadly missed by all who knew him.

Pat's remains reposed at his residence in St. Patrick's Park on Friday, from 3 o'clock until 9 o'clock with removal on Saturday evening to St. Mary's Church, Carrick-on-Shannon, arriving for Mass of Christian Burial at 4 o'clock with funeral afterwards to St. Mary's Cemetery.

Large crowds attended the obsequies showing the esteem in which Pat and the Murtagh family are held in the community. St. Mary's GAA Club members formed a guard of honour as the funeral made its way to the cemetery.