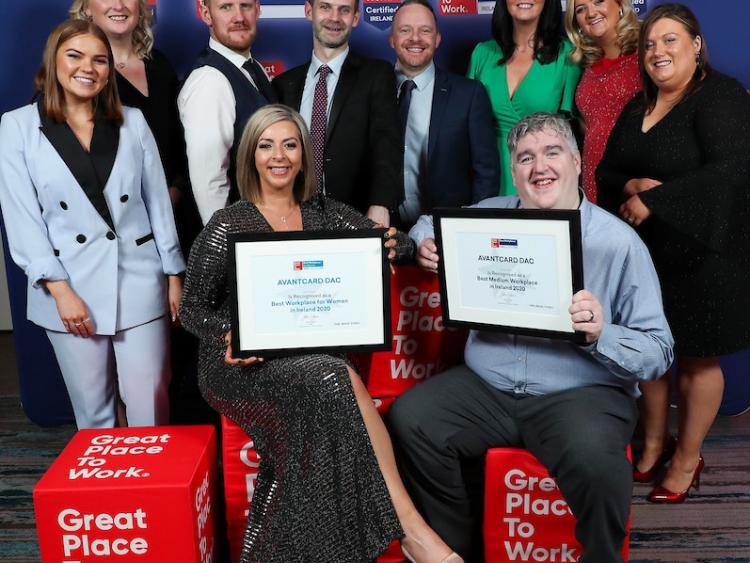 Some of the happy staff from Avantcard with their award

Avantcard, the Carrick-on-Shannon based consumer finance provider has formally been recognised as one of Ireland’s 'Great Place To Work' for the second year running.
The team celebrated with organisations from industries all across the country, at the annual ‘Great Place to Work’ gala dinner held in Dublin on February 26.
The credit card and loan provider, headquartered in Carrick-on-Shannon, jumped up two spots to 12th in the overall ranking of the top 25 medium-sized companies.
Avantcard was also one of only 20 companies to be accredited as a ‘Best Workplace for Women’. This award recognises leading Irish organisations that not only foster a high-trust culture and great work environment for everyone in general but also creates a positive and supportive workplace for women in particular.
Helen Richardson, Avantcard’s Head of HR, said “I am delighted that we have been recognised as one Ireland’s best workplaces again this year. Given that part of the assessment is based directly on feedback from our employees, we feel that it is a real endorsement of the value that we place on our staff. We are continually working to improve our workplace culture for the benefit of those who work for us.”
“We are also particularly proud of being included on the ‘Best Workplaces for Women’ list for the first time. It is so important for us to continually foster a supportive culture where all employees, irrespective of their gender, can develop both personally and professionally while maintaining a positive work life balance.”
This follows a winning streak for Avantcard last year where the team won several prestigious industry awards such as ‘Consumer Credit Team of the Year’ for the third year in a row at the 2019 Credit Team of the Year Awards, along with being crowned the CCMA ‘Contact Centre of the Year – Medium-sized Company’, and with ‘Industry Professional of the Year – Customer Service Advisor.’
On the night, Avantcard was in good company with some of Ireland’s leading organisations, including other employers in the North West such Abbvie, Lotusworks, Tesco and Woodies.
Other local winners were: Abbvie – Sligo/Longford – Number 1 in large category and accredited as a Best Workplace for Women;
Woodies – Leitrim/Nationwide – number 15 in large category
Tesco; – Sligo/ Leitrim/Roscommon/ Longford/Nationwide – number 17 in large category and accredited as a Best Workplace for Women;
Aura Leisure – Leitrim/Nationwide number 22 in large category;
Lotusworks – Sligo – number 29 in large category;
Cathal Divilly, Partner at Great Place to Work Ireland, said “The criteria to appear on the list is a massive achievement.
“While attractive benefits packages will go some way towards employee satisfaction, the companies on this year’s list have realised that their unique and distinctive cultures are what will mark them out in a crowded market.
“Overall, these companies are marking themselves out by providing a distinctive sense of meaning in both personal and organisational roles for their staff.”