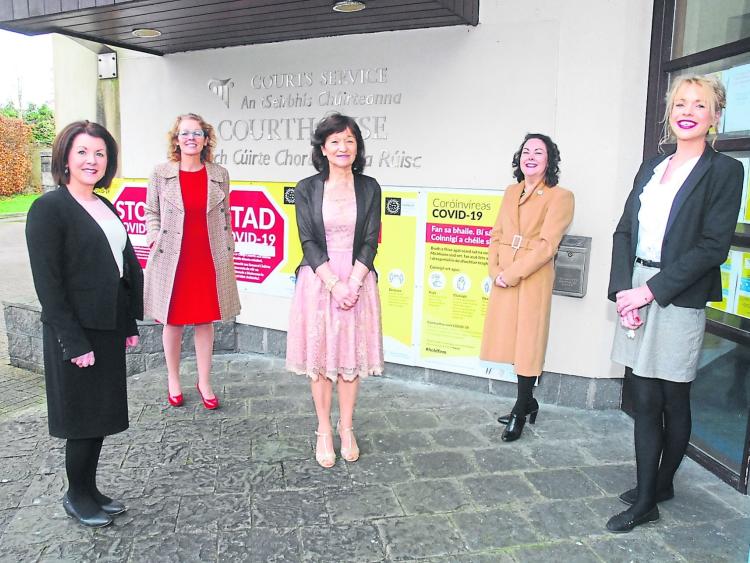 Tributes were paid to District Court Clerk, Geraldine McWeeney, on Tuesday, February 1, on the occasion of her last District Court sitting before her retirement from the Courts Service on February 12.

Leitrim State Solicitor, Noel Farrell led the way and noted that most of the practitioners in the courtroom would have known Geraldine for all their working lives.

He recalled the old facilities that existed in the former Courthouse in Carrick-on-Shannon when Geraldine, a native of Boyle, first took up her post in 1985 on transfer within the Civil Service. He said everything at that time had to be done manually, there was nothing electronic, and he described it as a different world to what exists today.

He said Geraldine transitioned from that work as she and others had to become familiar with the world of the Internet and doing things digitally and electronically. Mr Farrell said Geraldine represented the last of that group of people.

“Geraldine was a very engaging and sincere woman to deal with and treated everyone of us well all down the years,” he said.

Mr Farrell said she will be missed and wished her a long and happy retirement with her husband and children. He said she will have lots to do to keep her busy in the parish of Kiltubrid where she resides.

Sgt Michael Gallagher, on behalf of An Garda Siochana in the Leitrim Garda District and the Sligo-Leitrim Division, acknowledged Geraldine's retirement.

He said he knows Geraldine personally and professionally and said he would 'take a punt' that Geraldine was looking forward to her retirement and embracing the next chapter of her life having given so much public service in the courts in Carrick-on-Shannon.

He said she has always worked diligently and he acknowledged the cooperation she has always shown to An Garda Siochana including many urgent calls out of hours and at weekends for special courts.

Aoife Brennan, Manager of the Courts Service in Carrick-on-Shannon, on behalf of herself and all the staff there, wished Geraldine all the very best in her retirement.

She said Geraldine embarked upon her career in the civil service in November 1978 in the Civil Service Commission in Dublin.

She then spent a time in the Department of Agriculture in both Dublin and Sligo before moving to the courts in Carrick-on-Shannon in June 1985, spending most of her career with the same staff over the years, particularly Michael McKenna and Geraldine Cornyn.

Aoife described Geraldine as very diligent and dignified and 100% committed to her work, facing every challenge with courage and determination.

Judge Kevin Kilrane added his best wishes to Geraldine who he said was always extremely calm and solid in the performance of her duties.

Geraldine worked in the Circuit Court office before the amalgamation of the District and Circuit offices.

He said she saw many a Judge come and go over the years and in that regard, he paid tribute to his late colleague Judge Bernard Brennan.

Judge Kilrane said the Civil Service, generally, are not fully appreciated and are sometimes criticised for being perceived to not work hard.

That, he said, is simply not correct and added that the amount of behind the scenes work that the staff do is tremendous. He remarked that it must be done very carefully and with no room for error.

“It's an extremely responsible job,” he said and paid tribute to all the registrars who worked there for always being diligent, careful and helpful.

“That's what good civil servants do, they are meticulous, they work very hard, very diligently,” he said, adding that Geraldine is the very essence of that.

“You can now relax after a lifetime of diligent work in the civil service, you are a credit to the civil service generally and the Courts Service in particular. Your balance, your good sense, your solidity have shone through throughout the many years that I've known you. Long may that example continue.”

Geraldine thanked everyone for their kind words. “I thought you were talking about someone else. If I knew ye thought so much about me I mightn't have gone at all,” she said.

Geraldine paid particular tribute to her former colleagues Michael McKenna and Geraldine Cornyn who she described as a little family group for about 30 years that went through everything together, both good times and bad. She said there is a new group starting now and it is time for her to be moving on.

She said she always had a great rapport with the Gardai and a great relationship with the solicitors. Her way of dealing with a customer, she said, was to send them off happier than when they came in.

Geraldine thanked her colleagues and wished them well in the future.

Finally she thanked Judge Kilrane for always being very considerate and sympathetic and always putting her at ease during very busy times of work.

Everyone in the Leitrim Observer would like to thank Geraldine for all her kindness and assistance to us over the years and we wish her a very happy retirement.